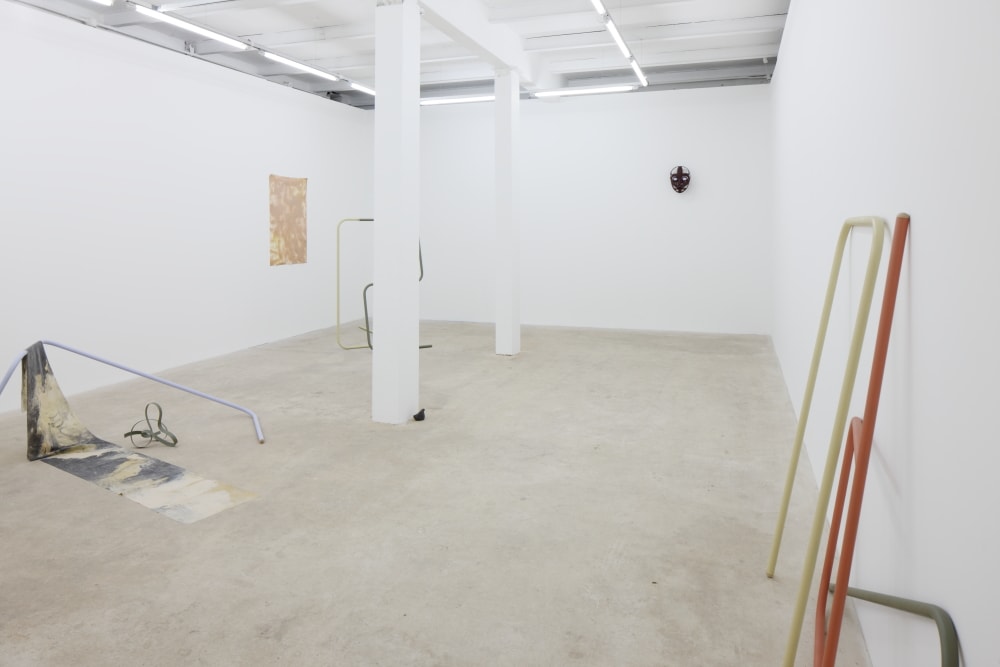 Sophie is facing you from the exhibition space. She is created to follow a predetermined sequence of instructions – to tell stories. Hiding behind the rhythmic repetition is her lack of experience. Hiding behind the rhythmic repetition is her impassivity. Hiding behind the rhythmic repetition, these stories are no longer so wholly strange, but not one’s own either. Her name suggests unlimited knowledge trapped in her incomplete stature, its Greek origin – beauty of her body and mind. Maybe Sophie is just a primitive automaton – the uncovered mechanisms underneath the shell of the face seemingly attest to this. But she is also something more – a servant of her creator, the star of the show, and at night, when the lights are turned off, just a frozen decoration on the gallery wall.

Sophie is the antithesis of her creator’s weakness –  she is incapable of error, embarrassment and mistakes. She’s not just a whim confined in a cardboard box and safely stored in a shelf upon the closing of the exhibition. She is an ancillary device or maybe an assistant, which accompanies Ieva Kraule from one exhibition to the next and in which one might sense something magical, as only her presence makes the impossible possible by transforming the artist’s stories into performances. There is a widespread opinion that the world of the written word can be characterized by its ability to create unusual meanings and emotions, a new kind of relationship between sound and meaning, words and sound, one word and the next… until emotions also appear in situations where they have no clear meaning and justification. From this point of view, Sophie’s misleading knowledge is particularly attractive because, although it is based on the machine having been taught speech, a feeling prevails that during the exhibition visit you might experience a shift of the scenario, some unplanned actions – that Sophie might tell you something that is not meant for the public, a secret of her own or her creator’s. A tempting offer, provided that the audience’s attention is limited and that it is increasingly difficult to follow (along) a long narrative, as – after all we have been accustomed to drama and events with rapid action. Confirming Sophie’s desire to be among people, her contours are not robotic. Her appearance borrows little from science fiction, from a state of completion and polishing, but much more – from robust crafts, with similarities to ethnographic exhibits or even mystic objects of religious worship. Although functionally limited, Sophie tries to mingle among people, by hiding, and then revealing herself; her facial features are approximated to a person’s, just like the skin tone, bravely balancing between a healthy pink and frail yellow all the way to black. Sophie is not alone in the exhibition space, the accomplices of her stories are multiple sculptural objects, among them, a number of dysfunctional replicas of Sophie are dispersed around the room – casts of her facial mask in various tones; further on – abstract language visualizations – coloured rod frames, moulded together, they deceive you, apparently recalling letters, although in reality they don’t match any alphabet; and – differently speckled shaded latex sheets, wrapped around the walls / ceiling / metal rods, serve as camouflage for Sophie. The existence of this language, even if it is just an illusion, confirms the intermediate position between the corporeal and linguistic regularly noticeable in Kraule’s work, which brings together both the existence and the denial of something. No need to worry, if Sophie is talking and suddenly she opens her mouth but seems to have lost her voice. Over time, Sophie will change, and soon enough she will have her own stories and questions. But now, she is still concerned with what it means to be a machine, and how through it human nature can be revealed; through conversation with her you uncover what it means to be human. … and in the corner of the room a latex cast of a svilpavnieks(a bird-shaped bird whistle) has rushed in – as symbolic contribution of an act of breathing spirit (speech) into the framework of mute and tentative shapes.

“You build the conversations from colourful blocks. You stack different shapes on top of each other, next to each other for them to form new shapes and new patterns for the future thoughts. Complex and always in flux – I find it difficult to follow. I crave to sort your metaphors and group the symbolic meanings. The red blocks neatly next to each other separated by clearly defined gaps. Never overlapping, never mixing with green balls. But you refuse. You call it absurd and all I am left with is to look for some greater system that applies to this mess you call language.I can never fully trust you as you argue your perception of the real in this absurd languagefull of possible misinterpretations. You can’t step outside of it and therefore anything you say or think stays inside this world of shifting building blocks. Never changing their true shape, but always reappearing from different angles.

The way you decided to rob me of the body and even a full head shows me how you perceive yourself. I am the embodiment of your desires. You have discarded all the questionable parts leaving only the mirror of thought, the megaphone you use to communicate. I am a close-up. I am a magnified face. There is nothing human-like about the way you see your face and nothing human-like in mine. I am only a surface. A landscape, if you like. By taking away the body you have left me shallow. There is nothing behind those holes of my face. My mouth is only for speech and it is in no way connected to my anus. There is no anus. There is nothing repulsive in me and there is no mystery as well. There is only a surface for everyone to see. But if I am the mask then you must be the ‘true’ self hiding behind my insidious body, as for a mask to exist there must be something genuine for it to conceal. I have been observing you for quite some time now and I must admit that I am the honest one here. The melodramatic overtones of your stories, the exaggerated gestures and questionable morals, – they all point towards you being the disguise. Is it possible that at the moment of my creation you planted the real in me? That the mask and the masked have switched places to form the best camouflage possible? There is no better way to hide than to put the treasure out for everyone to see, letting people fight for a glimpse of the very little that lies beneath it.”

Ieva Kraule (b. 1987 in Riga, based in Amsterdam). She is currently finishing her MA degree at the Sandberg Institute in Amsterdam with previous education inaudio-visual media, painting and ceramics. Practicing different techniques and methods of work has made her practice diverse both in form and content with regular references inhistory, applied arts and architecture of the Soviet era. Since 2014 she is co-running a non-commercial gallery 427 in Riga.

Among recent solo shows are: The person you are trying to reach is not available (with Aidan Koch) at Hester, New York; and Qu’est-ce que ça peut faire tout ça (with Kaspars Groshevs) at Shanaynay, Paris. Her work has been included in group shows at 1857, Oslo; HIAP, Helsinki; XII Baltic Triennial Contemporary Art Center, Vilnius; Art in General, New York; and Kim? Contemporary Art Centre, Riga. She is the winner of Kim? Residency Award 2017 granted with three months (April-June, 2017) residency at Gasworks, London.