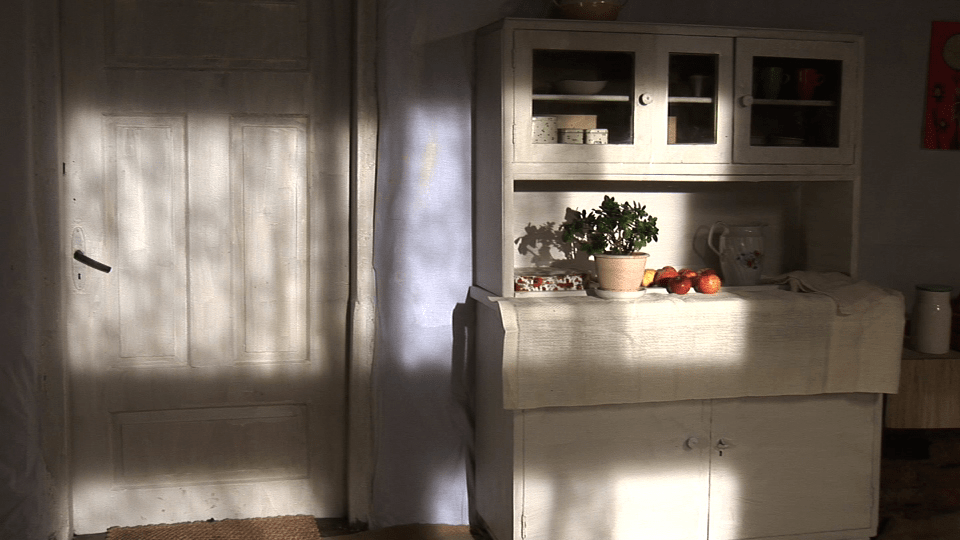 From 21 to 24 September, “KimKino” will offer to attend four – Latvian, French, Dutch and Finnish – film programmes. The first programme, screening Latvian films, will take place on Tuesday, 21 September at 7:30 pm at the cinema “Kino Rīga” (61 Elizabetes Street); the rest of the film programmes will be screened at Kim?.

Ģirts Korps
M
2003, 6’10’’
„M” is an abstract 3 dimensional video animation work, which is set up as a vision of a dream, revealing a vision of a dream-build world in the mind of a man – the author. The viewpoint in the art work signifies not only the very human experience, but also a wider, a general mythical thinking. „M” is created in cooperation with the Lithuanian ambient/industrial group Girnų Giesmės. The structure of the sound is used as a basic structure of the filmed and graphic material of the video work. Childhood memories, attitude towards the past and the present, symbolically meet up in the mood of this video work.

Dace Džeriņa
The Land of Happiness
2008, 12’0’’
„The Happy Land” tells about the searching of one’s own home. It begins with finding a proper place. Next step: tidying the place – cleaning dust, throwing out old stuff of the previous inhabitants. And then, one’s own things appear and find their places. And it’s one’s home till the moment, when, again, it’s time to pack and leave for a new place. Happy land is a place, which we look for, until we find or we don’t. Or we just have to make it ourselves.

Katrīna Neiburga
Kroha
2005, 2’0’’
Video clip for a poem by Semjon Hanin „Talk to me..”. Translation of the themes of the poem: possibility of a conversation, wish to escape, a need of metamorphosis and hiding – into the language of a video work. It’s a process of regaining of the events that passed, by the bits that stayed.

Katrīna Neiburga
Magic Things
2003, 12’0’’
He and she are heading for an outing in nature. They have taken along all those wonderful things which TV Shop ads offer you to buy every single evening. Her figure is transformed by seductive underwear, joint braces, ceramic dog that signals arrival of a stranger, foldable fence, hearing apparatus, movable meteorological station, toilet paper holder with a built-in radio and more, and more… Katrīna Neiburga poses a simple question – what would be if? Watching this film, usually we hear the audience laughing – what would life become if we would believe everything we are told… But don’t we? (V.Vējš)

Fēlikss Zīders
Even Better Than Reality
2002, 11’0’’
Action takes place in operation hall where operation is being naturally refigured. With the diagonal rotating line beginning and the end of process gets united. (Z. Jankovska)

Anete Melece
Vilma Does Not Work Today
2007, 8’30’’
Story about a man with 4 circles underneath his eyes; he’s called Varis. And a sales-woman, called Mirdza. Also a glove takes part – with a chewing gum spitted in its face, and a mega-pixel, which slowly digitalizes the world. Vilma has nothing to do with it – she is not at work today, so a possibility to find a hair or two in a slice of pizza is relatively small.

Gints Gabrāns
Starix
2004, 26’57’’
„Starix”  is far more about the media-based fame factory for everybody than about the success pack of a certain bum. Formal appearances are just tools for framing far more general and elusive quests, challenging individual and social preconceptions.

Arnis Balčus
Episodes
2007, 10’50’’
Balčus uses all set of tools of the B category movies to create stories through series of a monochrome photography, playing with stereotypes and banal plots about love, hate, good and bad, sex and crime, and power, turning these plots inside-out and creating a new line of associations. Nobody has to watch the entire movie to understand, what the story is about – it’s enough just seeing some episodes – with his photo-movie stresses the author.

Renārs Krūmiņš
Heart
2005, 05’28’’
A 5 minutes long story told by a non-material projection on the wall. In principle this is the only means of expression in which to say something meaningful about the meaningless in one’s self and one’s existence. Of course, the word “say” is a complete archaism here and the poetic has long ago become a prostitute. “Heart” is a story about how actually there is only one story. About death, destruction and despair. Every heart destroys itself – however fast it may try to beat. The rhythm that remains? Everyone can think what they will! But this has nothing to do with a living person anymore. Hopelessly lonely union. If someone should “read” something about love into the story then they are a complete fool!

Ilva Kļaviņa
Ballhead
2000, 8’03’’
Two inspectors have to face a mysterious case, again. Audience, then, faces the inspectors, the mystery, and the case itself.

Length of the programme: 104 min