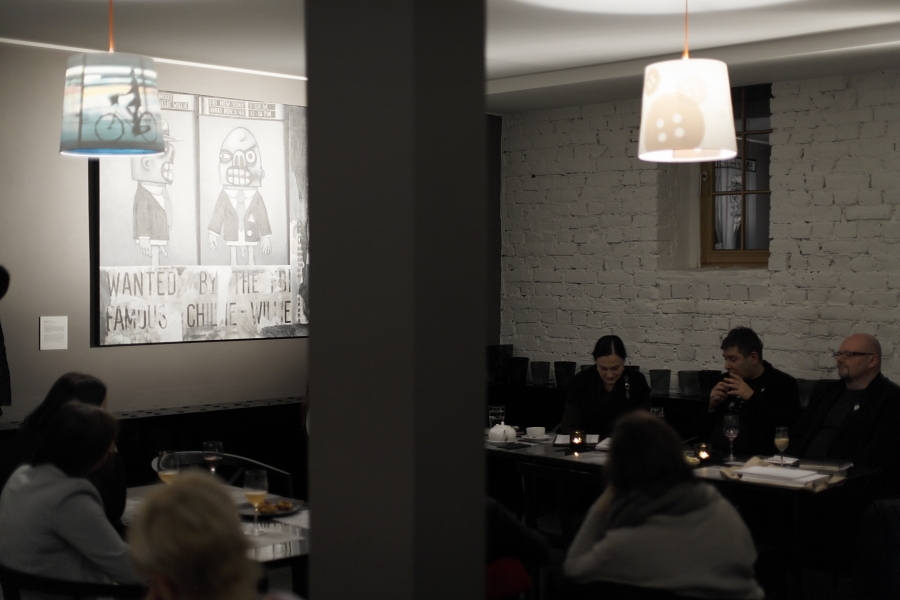 As part of the event series “The Case in the Café” a talk titled “Art, Humour and Crime” washeld in the Restaurant Kitchen on December 8 at 17.00 with the opening of the catalogue of the exhibition by Normunds Brūveris “Famous Chillie Willie in Riga”. The artist’s painting “Wanted by FBI” (2006) were exhibited in the restaurant until January 29, 2012.

“A crime committed as part of a work of art often amuses the viewer. Yet to maintain a sense of humour it is important for the committed crime to remain within the art territory. That is, the crime should not occur in the personal life of a particular viewer or concern the viewer directly. Yet types of art vary in ways they are distanced from the real, physical world. Therefore this is how it should work: the smaller this distance, the more we perceive the nature of crime and the less amusement it brings,” – contemplates Ieva Kulakova.

It is clear that the “case” of Normunds Brūveris is quite good example of a safe distance, and Edmunds Frīdvalds confirms this as he writes the following miniature on the work “Wanted by FBI”:
“Photographs of Famous Chillie Willie are collected not only by children and infatuated girl students but also by hardened men from the security services and other influential people. The Vatican has also shown interest in some of the photographs. Unfortunately, these particular photographs are always missing from the FBI archives just when Vatican ambassadors have arrived with suitcases stuffed with dollars to close the deal of the century.“ The potential for amusement is expected to be touched upon in the talk “Art, Humour and Crime” by its participants: art historian and curator of the exhibition Ieva Kulakova, philosopher Artis Svece, and Edmunds Frīdvalds, writer and author of the 41 miniature published in the catalogue.