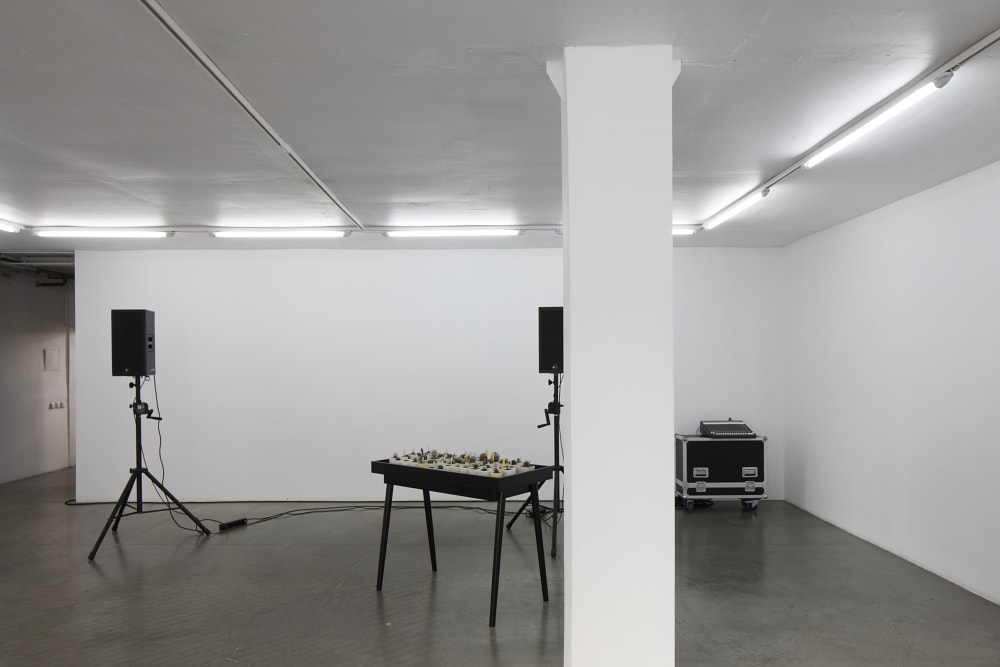 Provincialism can be a characteristic of any metropolis – but let’s leave the matter to itself.

Draw a building and think about what it signifies – something stable and permanent contrary to the material and immaterial flows of the city? Draw a train – could it symbolize the linearity of time and progress? Draw a sinking ship – can it be used to portray the collapse of ideas?

The exhibition Aspen–Kemmern draws a comparative parallel between Aspen in America and the former Latvian seaside resort town Ķemeri (Germ. – Kemmern), inviting artists, musicians, theoreticians and the public to do various readings of the two. Keeping in mind conceptualism of the 1960’s and 1970’s, the exhibition has been built as an inquiring contribution to the local version of COLA (Conceptualism in Latvia).

The idea of having Aspen as the point of reference and reflection has its own history of small coincidences. But if we look at the magazine now, particularly at the Aspen multimedia issue 5+6, which can be named an exhibition of conceptual art in itself – what is that’s most important? More than half a century after the emergence of conceptualism, when the rewriting of its history and the un-masking of certain myths and notions has become quite popular, the influence of conceptualism can be viewed as advancing a new art form – installation – by putting it on the proscenium of the art theatre, but also as establishing a plot of discourse for institutional critique, which has since been taken over and successfully maintained by art institutions themselves.

Aspen–Kemmern is an attempt to give its participants a chance to undertake a historical reflection, taking the Aspen multimedia issue as a reference point and contextualizing it in the current Latvian framework. It should connect with the reflexion on the social, political, ethical, economic and other aspects of the language of art. Besides, a reflexion on art’s 40-50 year old past can be thought of as an attempt to think about the same period in the distant future, just as making a simultaneous scission in any epoch, the differing places would reveal distinctive layers. Of course, the utopia and riskiness of this thought could be toned down, turning it into an only slightly exaggerated metaphor…

An example from the Baltic Sea region: in Latvia architect Eižens Laube carried out his biggest project – the Ķemeri sanatorium in the neo-eclectic or neoclassicism style, while in Finland several years earlier the Alvar Aalto designed Paimio sanatorium (a building completed in 1932) was built, which stands as an example of great modernist architecture. Laube’s building has been compared to an ocean liner; one could say it marks a stylistic relapse of a vanishing age that sinks into oblivion just like the Titanic. However, thirty five years later American architect, theoretician and designer Stanley Tigerman created a photo collage Titanic (1978), in which another modernist icon was portrayed as a sinking ship – the Crown Hall of Illinois Institute of Technology, designed by Ludwig Mies van der Rohe. (Crown Hall, IIT, Chicago, 1952–1956). And thus, the exhibition participants, admitting the unavoidable presence, as well as transformation, of the 60’s theme within the project, kept working on their artistic (research) goals, which have resulted in artworks of a variety of media and progressive processes, whose particular types of expressions – no matter whether verbal, oral or visual – in order to be comprehended, demand from the viewer moments outside of language and action. Here the concept is a carcass that itself is being re-and de-constructed in the process of making, and the exhibition that we witness is actually research on an undefined and unconsidered principle (connected to influences that we are trying, with a certain time delay, to put into the spotlight) of contemporary Latvian artists of a certain generation and way of thinking. The collective methodological approach of Aspen-Kemmern is ironic, just as a light game, paired with seriousness, picks up pondering its own rules, because today seriousness isn’t possible without irony or self-reflexion, just like “serious” art is not possible without thinking about the conditions of its likelihood.

Aspen is a ski resort town in North America’s state of Colorado, where former editor of Women’s Wear Daily Phyllis Johnson conceived the idea of creating a multimedia art magazine Aspen to be designed by artists, it would relinquish the limiting format of a bound issue. The first issue came out in winter of 1965, the united issue of 5+6– in 1967.

Aspen 5+6, where a whole artistic movement has been condensed in the single multimedia issue, has been chosen as an object of artistic reflexion. The period when Aspen was being published (1965–1971) was the time of pop-art, minimalism, conceptualism, happenings, body art, as well as art without the prefixes of “post-” or “neo-”. These movements/tendencies have left an impact on the further development of art. They are the “extended field” without which the art of today would not be possible (comprehensible or perceptible).

Aspen 5+6 (1967), compiled by the artist Brian O’Doherty, is most significant because it brought together numerous giants of the 60’s art scene, also placing them in a complicated and creative network together with the most influential writers and composers of the 20th century. Among the authors who have participated in the creation of Aspen 5+6 are Marcel Duchamp, Samuel Beckett, John Cage, Robert Rauschenberg, Hans Richter, Sol Lewitt, Mel Bochner, Naum Gabo, Laszlo Moholy-Nagy, Dan Graham, George Kubler, Robert Morris, William Burroughs, Roland Barthes, Susan Sontag, Alain Robbe-Grillet, Morton Feldman, Michel Butor, Tony Smith and Merce Cunningham.

It is a sanatorium and a resort by the Baltic Sea in the town of Ķemeri. The Ķemeri sanatorium, built in the neoclassicism style by the architect Eižens Laube, could be called a symbol of the situation of Latvia in the 1930’s it’s modernity and uniqueness, different from anyplace else on the world’s map. Its troublesome future allows the architectural monument to now be a symbol of the current situation in Latvia.

The exhibition will be complemented by an exhibition of the original issue of Aspen 5+6 (1967) in the National Library of Latvia, a series of readings and a film program. In the framework of the exhibition an Aspen-Kemmern zine has been issued, at the same time the publishing company Neputns has published Conceptual art in Latvia/Conditions for thinking by Jānis Taurens, the exhibition and project curator.