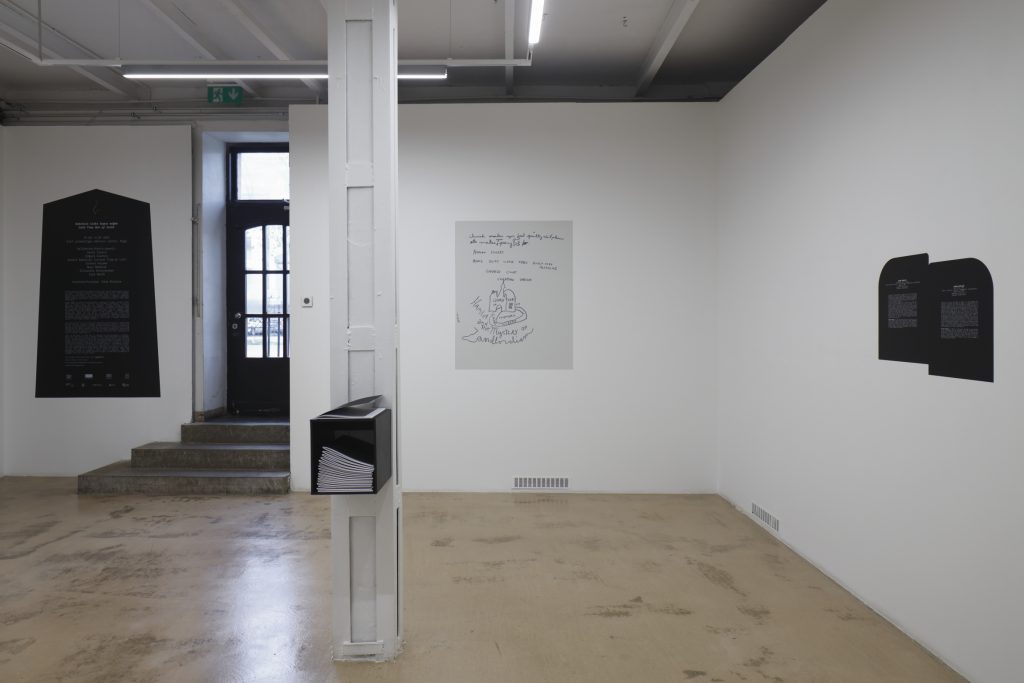 Cold Time Out of Joint is an exhibition comprised of works specially commissioned for the occasion, as well as already existing pieces by artists, curators and writers. The works provide a lateral insight into the subject of “cryonics”—a pseudoscientific method of life extension which works by suspending the dying process—and the hybrid concerns which they elucidate. By offering a spectrum of perspectives on the perception of time and its ethical dimension, Cold Time Out of Joint considers time as a form of suspended animation—a term-in-progress and form of animatic improvisation.

Time ‘in the joint’ is time that is subjected to and contingent on movement, while with time that is

“out of joint” (Hamlet) this relationship is reversed, and it is time that determines movement, or the absence thereof. The inability to act, the duplication of events, the distorted relationship between past and present events conjures up a fictitious and dreadful sense of reality, in which efforts to understand oneself means to be endowed with the privilege of creating a consistent narrative. Confused by its blurred identity, contemporary society, just like the characters in the Hamlet’s play who ask, “to be or not to be?”, sink into contemplations of whether their experiences are conscious, or whether they are already experiencing posthumous life. Here, installation, video, sound and text shed light on a range of issues related to identity, memory and governance turning the exhibition into a sort of laboratory, where the cryogenically frozen art student Hamlet has begun to thaw and is attempting to navigate a new “out of joint” world.

While Hamlet tries to verify his memories by observing others’ reactions, the exhibition’s spectral body is revealed in the following scenes: in a figurative composition of typical Latvian cemetery culture – a retro-futuristic feast for ancestral souls (Santa France) in the form of a downloadable hologram; in an installation stored in sealed freight containers, from which any visual signs of the artist’s (Edgars Gluhovs) previous exhibition in the same space have been removed; Hamlet as a police state in a newly created text (Ainārs Kamoliņš) providing instructions for how to create confusion (due to incomplete information) and how to maintain the accompanying doubts about the justifications for the right course of action; in a video essay (Estere Kajema) of a hauntology wrapped in sadness, where pop culture ghosts act as doormen allowing phantoms to slip out of their inhospitable dwellings in a late capitalist world; in associatively playing out the spirit of Hamlet’s father as a hallucination through an emotionally charged audio piece (Nour Mobarak) recorded in a nursing home, shower, car and elsewhere and which broadcasts conversations with the polyglot father, who has a 30-second thought and memory span due to a neurological anomaly; in an installation, (Elizaveta Shneyderman) the ongoing and re-animated historical tropes—progenitors of early animation and outcasts of the blockbuster Disney enterprise—are transformed into new forms, reborn and resurrected using cryonic regeneration; and finally, in a mural containing fragments of drawings from the set design of an adaptation of Hamlet (Jack Smith) that highlight the concept of “landlordism” as “the central social evil of our time” or magic, paying an offering in exchange for protection so as to be left alone.

Santa France (b. 1993) is a Latvian digital artist who currently lives and works in Berlin. She is mainly focusing on exploring the potential of 3D software and its usage in creating web-collages, videos, animated .GIF images and digital illustrations that deal with the themes of self-reflection, solitude, nostalgia and internet culture.

Edgars Gluhovs (b.1980) is Latvian artist currently residing in Berlin and Zurich. He studied at The Arts Institute at Bournemouth and at the Staedelschule in Frankfurt. Edgars Gluhovs works in a variety of media, amongst others – drawing and photography. His works have been shown in solo and group exhibitions at various galleries and institutions, amongst them Kim?, Riga, Kunsthalle Glarus, Halle für Kunst Lüneburg, Gallery Patrick Ebensperger, Berlin. He received a Swiss Art Award in 2013.

Ainārs Kamoliņš (b. 1980) is a philosopher from Riga. He has obtained an MA in philosophy from the University of Latvia. Kamoliņš’s main academic interests concern the questions raised by the early modern philosophers, including how biology, natural and exact sciences are linked to philosophical theories. His best known book is Diaries: Spinoza’s Poetics (2014, published by Kim?). In 2016 he wrote a dramatisation of Kierkegaard’s The Seducer’s Diary that was staged in the Latvian National Theatre.

Estere Kajema (b. 1992) is a Latvian born writer and art theorist, based in South East London. She holds a BA, MA, and MRes in Contemporary Art Theory from Goldsmiths. She currently researches topics of death, memory, hauntology, and witchcraft.

Nour Mobarak (b. 1985) is a Lebanese-American artist who is based in Lost Angeles. She excavates violence and desire – the compulsions and glitches in both a person or nation state. Mobarak has participated in exhibitions at the Miguel Abreu Gallery, New York; Museum of Contemporary Art, San Diego; LAXart and Hakuna Matata, Los Angeles, Cubitt Gallery and Rodeo Gallery, London. Mobarak has published poems in journals such as F.R. David, The Claudius App, and The Salzburg Review among others.

Elizaveta Shneyderman (b. 1992) is New York based Belarusian/American curator, researcher, and publisher working across contemporary art and media studies. Her interdisciplinary research focuses on the history and philosophy of media materialities and the techniques which emerge from them, including their influence on corporality in the era of digital images. Elizaveta’s essays on contemporary art and visual culture have been published in Artforum, BOMB Magazine, The Brooklyn Rail, and Rhizome, among others.

Jack Smith (b. 1932– d.1989) was a New York-based filmmaker, photographer, and actor known for his pioneering influence in experimental filmmaking and performance art. Smith’s influence pervades experimental filmmaking and performance art in the US to this day, and is present in the works of Warhol, John Waters, Laurie Anderson, and Cindy Sherman, among countless others. In 1998, The Institute for Contemporary Art/P.S.1 Museum mounted ‘Jack Smith: Flaming Creature: His Amazing Life and Times,’ a retrospective of his work that traveled to Pittsburgh, PA; Berkeley, CA; and Berlin, Germany.