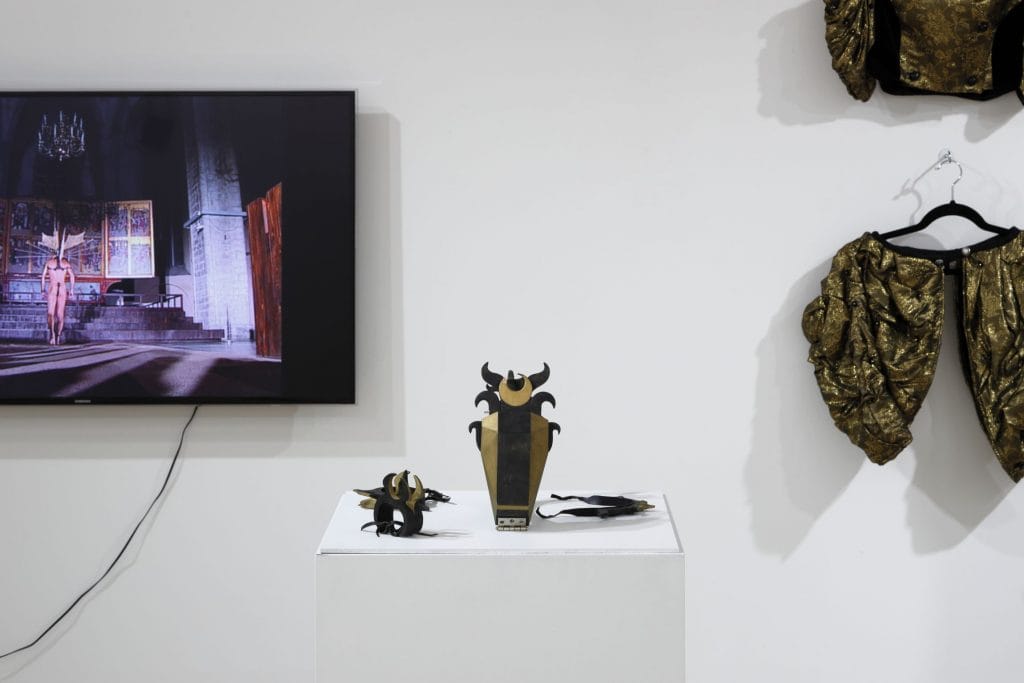 The exhibition is centered around the notions of excess and refusal as artistic and lived practices. The two are, in fact, a contingent pair – often excess is achieved through refusal and refusal is enforced because of excess.

Our understanding of excess relies on the idea of existence of limits to what is acceptable – politically, culturally, in our private and public lives etc. Refusal or inability to abide by these limits – to step outside the acceptable – produces what is perceived as excess, often with connotations of immorality. Attributing excess to individuals or groups is used as a tool to marginalise based on gender, race, sexuality, ethnicity, class etc. Declaring someone or something excessive is also a way to refuse access, means and power. However, from this a conscious refusal by marginalised positions can emerge as a powerful strategy for reclaiming one’s agency. Similarly, in the context of this exhibition, excess is understood not as commodified luxury but as opulence against constrictions.

Historically, ideas of excess, opulence, luxury and abundance have been associated with a rather negative image and linked to frivolity, unseriousness and unintellectuality. In art, for example, these alignments have allowed disregarding a wide array of artistic practices as sidenotes to “Great Art”. In the context of this dichotomy and while refusing to be subjected to it, the artists in the show use excess as a tool for invention, both aesthetically and conceptually. They place the notions of refusal and excess into various contexts and themes: gender and activism, queerness, abjection and grotesque, health and illness, performativity, community building and experimentation.

This is a quest for an imaginative opulence.

Group exhibition “Excess and Refusal” is accompanied by a publication written and edited by Keiu Krikmann, designed by Be Oakley. Publication as a PDF file is available here.

Based on the sanitary protocol issued by Ministry of Culture, Kim? is implementing physical distancing and disinfection norms for all the visitors (1 person per 10 sq. m). Please note: making a reservation is not required, however a maximum of 20 visitors is allowed inside the space at the same time. Wearing a face mask is mandatory.

Be Oakley is a writer, facilitator, and publisher based in Brooklyn, NY. They received their MFA from Virginia Commonwealth University in 2018. In 2015, they started GenderFail a programming and publishing platform that looks to highlight a intersectional queer subjectivity.

Rebecca Jagoe is an artist, art writer and editor. Their practice examines how within European culture, the Feminine as an ideology and an identity has been shaped at the meeting point of medical rhetoric and the aesthetics of high fashion. Their work is rooted in personal narrative: to explore how any one person’s subjectivity and experience can be seen as the distillation of historical and cultural imperatives, rather like the filtration system of an oyster whose body is used, somewhat imperialistically, by human scientists as a mode of measuring pollution levels of their surrounding environment.

Sandra Kosorotova’s textile and text-based practice can be located in between the margins of art, design and activism. Most of her artworks act as such only in the exhibition spaces; otherwise they function as wearable clothes, accessories and interior textiles.

Hanna Kisch has a Bachelor’s degree in fine arts from Konstfack University College of Arts, Crafts and Design and has a background in fashion and jewellery art. Kisch’s works are material based and sculptural, often created in collaboration with other artists or performers. Her works often investigates abjection, longing and sexuality.

Agu Pilt was an Estonian artist, costume and fashion designer. In the 1990s and early 2000s he was, among other things, known for his original fashion shows and performances, foregrounding sensuality, beauty and poetry.

Pire Sova and Ando Naulainen started Persona as an ongoing performative event series in 2017. It is an experimental platform for exploring self and community identity that takes different forms such as dressing-up events, art installations, readings, and a radio show. In addition to Sova and Naulainen, the series involves a number of other participants and the aim is to provide a safe space for creating and discovering yourself and your desired ways of expression.

Women’s History Museum, founded in New York City in 2015, is the moniker under which Mattie Barringer and Amanda McGowan make work. WHM engages with fashion as a medium that has the potential to exist beyond regurgitative spectacle but has the ability to change the fabric of reality. WHM was founded to foster community through making clothing and art, to react against feelings of isolation, powerlessness, and emotional instability, as well out of the desire to create novel and previously unseen images of beauty.

Keiu Krikmann is a writer, translator and curator. In her work both as a writer and a curator, she is interested in exploring how identities and intensities acquire meaning in different contexts and are expressed through material focused artistic practices; as well as how these contexts are defined by particular historical, political, social and cultural circumstances.