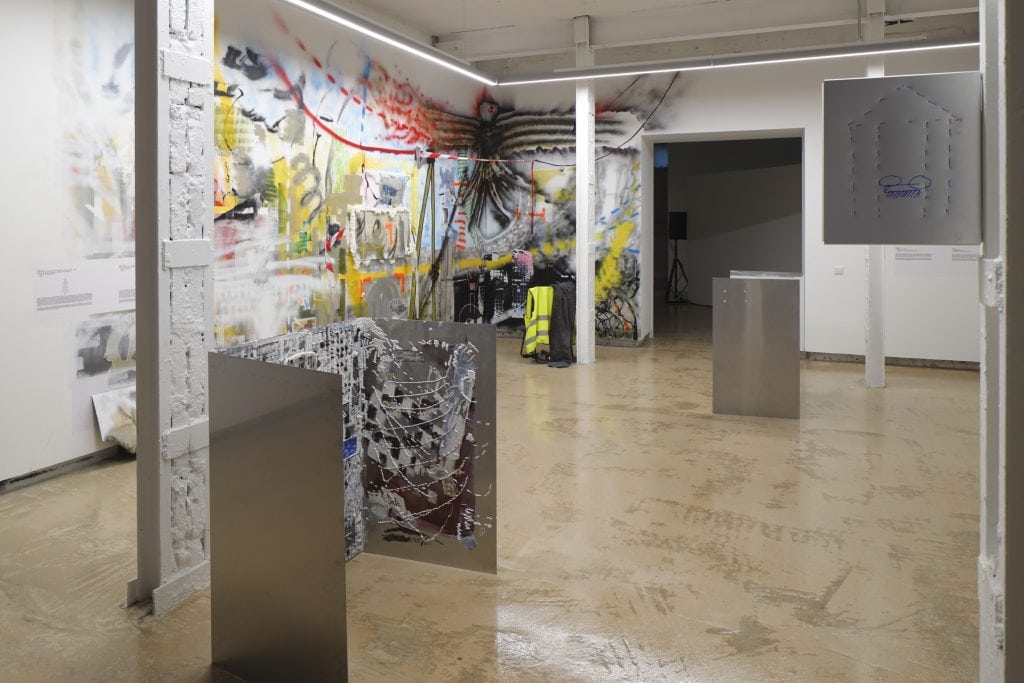 FAKTURA (FOR A NERVOUS SPIRIT)

Faktura (For a Nervous Spirit) is a tribute to the spirit of unrest during the so-called “post-optical” era. This spirit, although it to a great extent contains a nostalgia for the pre-technological era with the raves and dance floors that define it, increasingly manifests itself as a model for a certain behaviour that individuals play out against the background of today’s reality. It shows most vividly when one starts to “wave back at the machine”. Guided by the search for free analogies and connections and mediated by various tools the exhibition focuses on the spirit world, on surveillance and monitoring strategies, and reflects on the physical/mental health and well-being of a society trapped in a city. The exhibition borrows ideas from the work “Faktūra” (1914) by Latvian-born Russian artist and theoretician Voldemārs Matvejs (1877-1914) to describe the surface quality of objects that are otherwise impossible to record by touch. Each piece included in the exhibition – archive photographs and videos, canvas and graffiti, as well as works created through hand-tapping, typeface and collage techniques by both living and deceased artists – gives off a “noise” or texture characteristic of a surface autonomy and content specific to them. The shift towards contemplating the role of the surface and texture in art today is intimately related to the growing distrust and pollution in the sense of vision, or according to Matvejs: ‘the existence of “noise”’, and hence faktura, is predicated upon the autonomy of the work’s individual material elements – faktura lies not in their unification but in their cacophony.

The faktura of the exhibition is formed by: photographs by Voldemārs Matvejs of “primitive” and at the same time expressive ritual spirit figures of the peoples of North Asia from the Latvian National Library collection (1913); a video-therapeutic film screening of Ieva Rubeze‘s (b. 1977) “Zāles” (2000), which includes performances by various Latvian magician-healers, “problem consultants” and “quack doctors” accompanied by white noise; A second, Riga version of Merlin Carpenter‘s (b. 1967) “Paint-It-Yourself” suggesting that the tension of the painting process is already present when all is on view are eight primed canvases and a box placed in the middle of the room full of ready-to-use oil paint tubes, and protected by plexiglass; Leigh Ledare‘s (b. 1976) nearly 60-minute-long film “Vokzal” (2016), which maps hidden social dynamics by capturing the banal, yet complex transit choreography of three Moscow train stations; a site-specific gesture against censorship by 0.0.01.0.0 (b. 1999) that has come about as a result of continuous hand/body movement, or graffiti fitness, further censoring the piece; Elza Sīle‘s (1989) set of a wall and floor bound paint applied metallic units that builds up a vocabulary of psycho-spatial typologies in flow; Vanessa Gravenor‘s (b. 1992) video “Me/My Bullet” (2016), which is based on personal experience of the terrorist attacks in Paris in 2015, that through an absurd historical point of view traces the duration of the attack, and the bullet, to the song “The Sound of Silence”; a photograph of famous bionic pop artist Viktoria Modesta (b. 1988) from the Counterflow (2016) campaign that conveys a multidisciplinary approach to future-pop identity and performance art with a post-human edge and is accompanied with the author’s call to discard past prejudices and to make way for fully fluid identity; the curator’s essay from 2019 (in Latvian, Russian and English) transferred to the wall by Aleksandra Samulenkova (b. 1986) and set in the smart-extravagant and “witchy” typeface Zangezi; and James Bridle‘s (b. 1980) video “My Delight on a Shining Night” (2018) which is accompanied by an ancient English melody that glorifies thieving and recordings of a numbers stations that was filmed in Akrotiri, a joint British-US base for over-the-horizon surveillance and global intelligence gathering, which is at the same time home a large population of flamingos. The exhibition also includes the seminal publication “Creative Principles in the Plastic Arts: Faktura” (1914) from the Zuzāns Collection.

James Bridle (b. 1980, United Kingdom) is a writer and artist working across technologies and disciplines.

Merlin Carpenter (b. 1967, United Kingdom) is an artist who explores the consumerism, fetishism, and elitism of the art world through stunt-like conceptual exhibitions.

Vanessa Gravenor (b.1992, Canada) is an artist and a writer living in Berlin. Since 2016, she has been working on the topic of terrorism, the war on terror, and proxy wars.

Leigh Ledare (b. 1976, USA) explores human relationships, social taboos, and the complexity of contemporary culture through images that are often disconcerting or provocative.

Voldemārs Matvejs (b. 1877–d. 1914, Russian Empire) was a Latvian painter, theorist and researcher. He made a unique contribution to the research into cultures outside Europe at the beginning of the 20th century.

Viktoria Modesta (b. 1988, Latvia) is a bionic pop artist and creative director. Brought up in the subculture of London, now living in Los Angeles, Viktoria is known for her multi-disciplinary approach to future-pop identity and performance art with a post-human edge.

Ieva Rubeze (b. 1977, Latvia) is an artist working with poetic videos and installations and has created works full of imagination.

Aleksandra Samuļenkova (b. 1986, Latvia) is a type designer. In addition to her daily work on type, Aleksandra conducts various typographic experiments, as well as researches type design traditions and their connection to historical events.

Elza Sile (b. 1989, Latvia). Works with possibility lists (menu) consisting of units and their play-outs (sets). Combining analytic division with mental imagery she builds up a vocabulary of psycho-spatial typologies in flow. Currenty lives in Zurich.

Based on the sanitary protocol issued by Ministry of Culture, Kim? is implementing physical distancing and disinfection norms for all the visitors (1 person per 4 sq. m.)