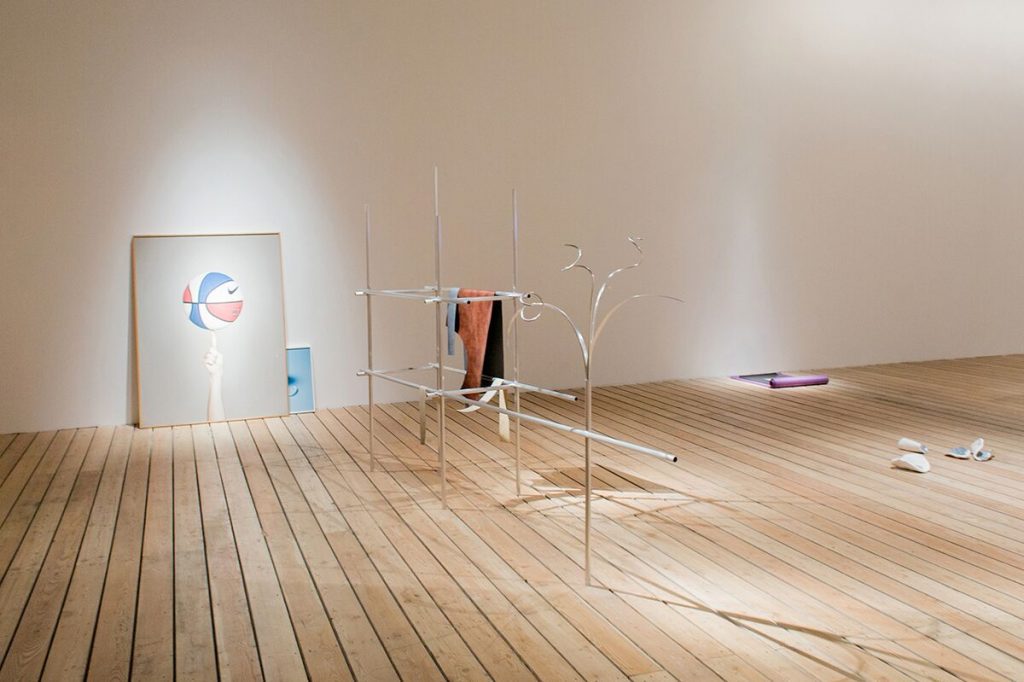 Opening: May 8 at 6pm – 9pm. The opening event was be accompanied by a performance by Kaspars Groševs.

This exhibition is part of Riga’s program as the European Capital of Culture 2014, conceived by the Embassy of Latvia to the Russian Federation.

In the 1980s, inspired by the workings of the weather station, The Ansis Rūtentāls Movement Theatre carried out a series of repeated happenings entitled Probe. Standing in the dunes of the Baltic coast, a group of near-naked performers studied the beauty of the movement coming from within themselves. They stepped inside the rubber-probe to test its materiality in relation to their own limited human strength, and experimented with the characters that it was possible to draw while they were inside. It was a collective gathering without a script, an abstract-sculptural gesture; an act of impetus.

Since then, the relationships between language and body, body and space, subject and object have shifted. Now, the general imperative is not to take a position of isolation from the world, but to understand it from an engaged social position; the old idea of the artist’s individualistic creativity has become out-dated. Furthermore, there is heightened awareness that the creation of the new is becoming more difficult, since all possible encounters and clashes seem to have already taken place. Instead, an activity-based, networked mode of art-making has begun to prevail, where artists continuously weave endless speculative relations and variations that can only exist within a larger framework. Such vortex can generate an enormous amount of energy, but can have unpredictable results. Thus Vortex is an apt title for this exhibition, which aims to playfully reinvent a largely unknown historical art event.

Vortex is an exhibition-experiment where a group of up-and-coming Latvian artists invent loosely choreographed variations on the bodily acts of Probe. Six distinct artistic voices present works using a full range of media, from a sculptural parody inspired by an anatomical cast (Evita Vasiļjeva), to a self-censoring wooden framework (Kaspars Groševs), a melody of drapes and painted fabric (Ieva Kraule) a yoga-mat facing meditative Google imagery of sunsets (Miks Mitrēvics and Kristīne Kursiša), an intimate gaze generated by the restaging of miscellaneous glossy stock photography (Kristīne Kursiša) and chrome installations recalling a ruined city (Daria Melnikova). Vortex is thus an exhibition that makes the thinking of “then” collide with the “now” in a beautiful flow of ideas that are as poetic as they are socially relevant.

While the original performances made reference to the idea of the lonely mythological figure of the “creator,” here the participants explore the role of the artist within the much more complicated set of relationships through which art develops today – spinning in the eye of the cultural-industrial vortex.

Garage Museum of Contemporary Art is an independent platform for new thinking.Through an extensive program of exhibitions, research, education, and publishing, Garage reflects on current developments in Russian and international culture, creating opportunities for public dialogue and the production of new work and ideas. Founded in 2008 by Dasha Zhukova in Moscow, the institution is building a unique research archive focusing on the development of contemporary art in Russia while pioneering diverse educational projects for families and professionals that are the first of their kind in the country. These provide the foundation from which experimental exhibitions, events, and screenings are initiated.

Project from Kim?’s side is supported by: The Ministry of Culture of the Republic of Latvia, kultura.lv, Embassy of Latvia to the Russian Federation, The State Cultural Capital Foundation, Riga European Capital of Culture 2014.