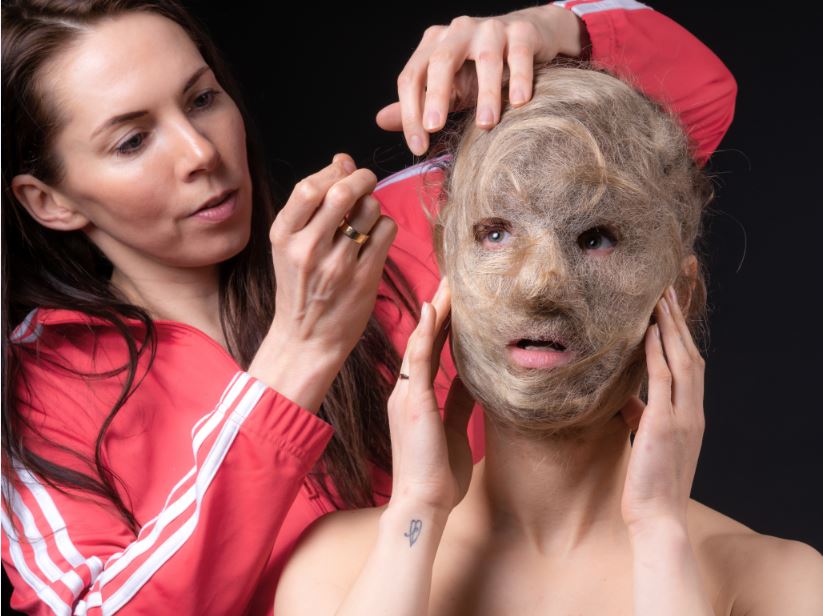 Artist Katrīna Neiburga visited several masters of their trade over the period of several months. They each styled Katrīna according to her facial structure, her aura, by reading the stars and according to their mood – fringes, chignons, locks and curls, braids and pony tails. Sharing stories about themselves and their clients, which have amassed almost like hair folklore over years of working in the trade, Neiburga’s videos reveal these hairdressers to be something similar to therapists. Like healers. Anyone who has tilted their head back and let the water flow through their hair clasped in a hair dresser’s hands will agree that there is something very intimate to this relationship.

How much of life do we spend worrying about our hair? How much of our image does it shape? Hair translates our feelings and desires, and has been assigned great power. In Eastern cultures hair defends from the evil eye and from malign spirits. And here – hair is frequently still not thrown away, but rather washed away or burned, so that birds cannot use it for their nests. If that happens, your head allegedly starts to hurt.

According to tradition religious women, nuns and married women should hide their hair which is an instrument of seduction, an erogenous zone. And monks and soldiers, patients and prisoners should shave their heads.

And then there are those preserved braids, cut off in childhood, in which, after holding them in your hand for a while, you can unexplainably feel that they have once been alive, as though they are severed limbs – these small braids and ponytails. All of this is woven into the exhibition Hair where live and dead hair speaks about current and former owners. Where a mask made for protection out of a husband’s hair is exhibited side-by-side with hair underwear replicating pubic hair. Where decorative art takes the shape of hats and jewellery made of hair. Where hair dressers talk about that case where a woman had nerve endings in each of her hairs and when it was cut, blood poured, and comment that it is any man’s dream to be next to a blonde for a moment. Where tingling whispers spread over the back of the head – shaved, red or greying – while a hair dresser’s fingers brush past.

Katrīna Neiburga’s art is subject to a desire for emotion, authenticity, and memory preservation. It is poetry which works on the level of perception and emotions – it has been stripped to the bone, and saturated with truth. It is stinging and beautiful. One of Neiburga’s main modes of expression is her deeply personal iconography which shines through in her video installations at her performances and in her scenography. She is interested in sociology and studies preceonceived notions about the state of things.

Neiburga received her Master’s degree at the Art Academy of Latvia in the Department of Visual Communications. She has also studied at the Royal Institute of Art in Stockholm. Since 2000 she has participated in multiple exhibitions all over the world including Sydney in 2006, Moscow in 2007, Venice in 2015, Kochi-Muziris in 2016 and in the 2018 Riga Biennial. In 2008 she was a finalist for the Ars Fennica award, and received the first Purvītis Award. Neiburga has created the scenography for productions at, amongst others, the Latvian National Opera, at the Stanislavsky Theatre, the Perm Opera, the Bastille Opera House, the Mariinsky Theatre, and the Teater Grob in Copenhagen.