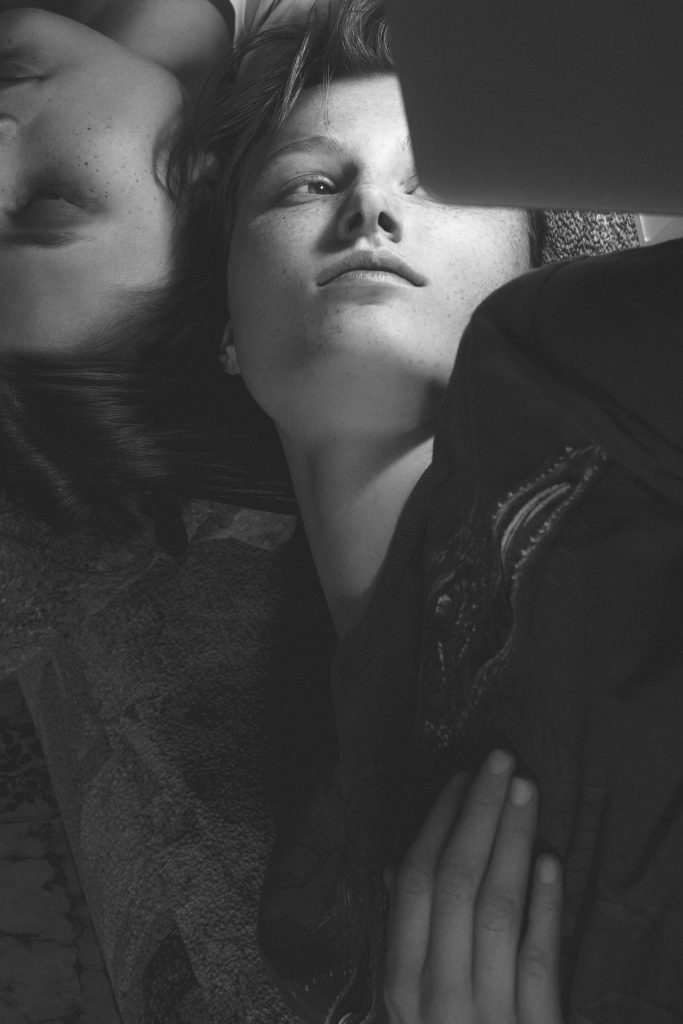 Kim? Contemporary Art Centre is proud to present Berlin-based photographer Ilya Lipkin’s new body of work, YOU are the model! YOU are the majority! Conceived over two sessions, and across two locations (Berlin and Riga), the fourteen photographs capture young teenagers—cast off of an Instagram search—in an obscure, domestic, and abandoned apartment in central Riga. The group of uninhibited, photogenic strangers appear as a family of friends—comfortable in their environs as they clamber atop the well-worn couch. Behind them, an idiosyncratic wallpaper casts an eclectic tone. In the midst of the desolate domesticity, the subjects focus their gaze at nearby screens—or  nowhere at all. With no prep work or stylistic direction from Lipkin, the group arrived in their day-to-day countenance. They came to perform themselves, knowing full well they were unlikely to be captured as such. Stuck together for hours, the group of live models conveyed boredom, disinterest, and passivity, at times mirroring one another’s affect as if trying to stand out by disappearing— or blending in.

The result is a body of work that is uniquely about nothing. This kind of “nothing” recalls the uber successful, 1990s American sitcom Seinfeld. The series namesake comedian, Jerry Seinfeld, came up with the brilliantly dull idea of  creating a show about his fictional self immersed in real–life scenarios. In poetic homage, Seinfeld’s present day “colleagues” visibly dressed in 1990s period garb are as follows: Alise Gaile, Betija Liza Gersone, Daria Kapitonova, Ļena Kiseļčuka, Sabrina Race, Elīna Rancāne, Toms Sargelis, Agnese Upmale, and Francis Alberts Virtmanis. Just like Seinfeld himself, they performed none other than Lipkin’s orchestrated photoshoot.

Displayed in a sequence which evokes both the internal and formal logic of the series, Lipkin’s photos vary from the clean, composed, and crispy to the blurry, foggy and seemingly accidental. They are also unscripted and collaborative: in one image the light from the model’s phone accidentally lights the frame, while in another the model’s face absorbs light from the reflection of a computer screen. The screen-binge eye-fatigue is apparent on the subject’s faces throughout the series, but a viewer is impervious to this.

Borrowing from Lipkin’s autobiography, and considering the exhibitionary context, it may be tempting to read these new series through the lense of the post-colonial-Soviet aesthetic. But this is not the author’s intent. The laconic yet emotionally precise study of self-presentation falls into Lipkin’s ongoing interest in exploring the concept of the “real” within simulation and the “hyper-real”. In order to reveal the more generalized version of the conditions underlying the development of contemporary global culture and society, Lipkin captures the momentum of his photo shoot-performance casually, as in a ‘state of distraction’. The lone girl posing in Lipkin’s Berlin studio gets the memo: “It really was like that, we were all just glued to our screens”, the young Ukrainian tells Lipkin.

After Riga the exhibition will travel to Concert Hall GREAT AMBER in Liepāja as part of the Liepāja Art Forum 2022 in September-October, 2022.

Ilya Lipkin (b. 1982, Riga) is an artist based in Berlin who operates at the intersection of technology, youth and advertising. The photographer is fuelled by the zeitgeist, creating direct, bold, boundary-pushing work which straddles art and consumer culture. Lipkin’s practice is intuitive, dynamic and subversive, and rooted in the realness of the world around him. He is a graduate of the Whitney Independent Study Program and his work has been exhibited at High Art, Arles; Svetlana gallery in NYC; Autocenter Berlin; Hamburger Bahnhof Museum für Gegenwartskunst; Lars Friedrich gallery and Silberkuppe in Berlin; as well as at Nousmoules in Vienna, among other venues. Lipkin’s work and writing has appeared in Texte Zur Kunst, Artforum, Periodico Magazine and others. He is represented by Lars Friedrich Gallery. YOU are the model! YOU are the majority is Lipkin’s second solo exhibition at Kim? following the solo show in 2017.