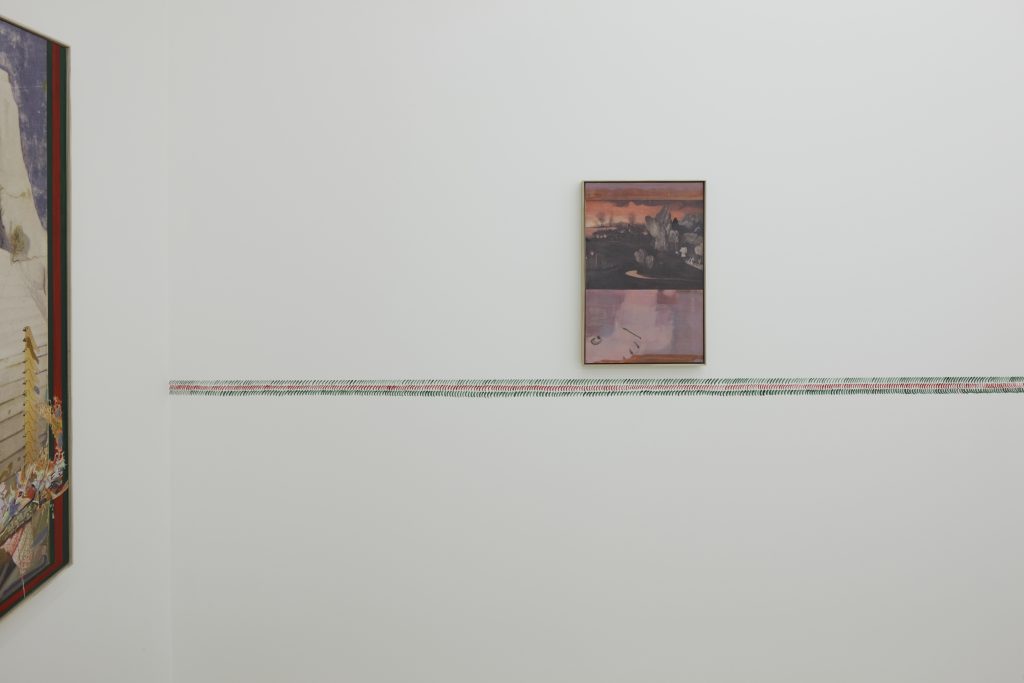 In collaboration with Temnikova & Kasela Gallery, Tallinn within the institution-in-residency programme.

Inga Meldere’s solo-exhibition Coloring Books is a continuation of the thoughts and methods initially addressed in May of this year in her exhibition in Tallinn, titled House by the waterfall or colouring books for adults. In the disposition of the fresh exhibition-space renovation, the artist will sustain her individual and publicly esteemed painting method and interfere into its white backdrop with wall divisions – through compositional line colourings in some fashion brand’s style, covered in layers of cultural-historic motif inspired paintings (ones previously exhibited, as well as speci cally made for this exhibition) and sculptural elements in the form of video and a limited edition print.

House By the Waterfall or Coloring Books for Adults

A method advocated for children for several centuries, in the last decade coloring has once more become widely popular among adults (the surge in activity was rst noted a er the Second World War). Of particular interest to the artist, in the context of an increasing exposure to images online, is the apparent increase in popularity of the colouring in activity with people who are not directly involved in creative work on a daily basis.

The process of coloring is o en described as a relaxing and therapeutic pastime with an added bene t of inspiring more innovative thinking at work and in daily life. However, Meldere also points out, in contrast to drawing where the image is made “from scratch”, by de nition mere coloring is considerably more restrictive. The active participants are presented with a visual narrative from the outset. Immersing themselves in the most diverse themes, from homoerotic imagery to philosophical topics with references to art history, they are given an option to encounter a ready image or event as opposed to having to imagine one. For Meldere, this distinction opens up questions closely related to her own practice – how does one relate to images they encounter? Does a process such as coloring allow for a more involved re-contextualising of an image, personally participating in the process, or does it merely facilitate the passive following of outlines? This inquiry follows Meldere’s ongoing engagement with art history and its relation to a “personal archive”, how familiar images can exist in parallel to private memories, and experiences. In her works for the show, Meldere elaborates on the idea of a complex image, the richly detailed works are built from separate, but mutually related layers of collage. In her compositions, illustrations from brochures, photographs from private archives, and yearbooks become both contours, and coats of paint. Here, coloring as an activity provides an insight into the contemporary attitude towards everyday images and what that can reveal about painting.