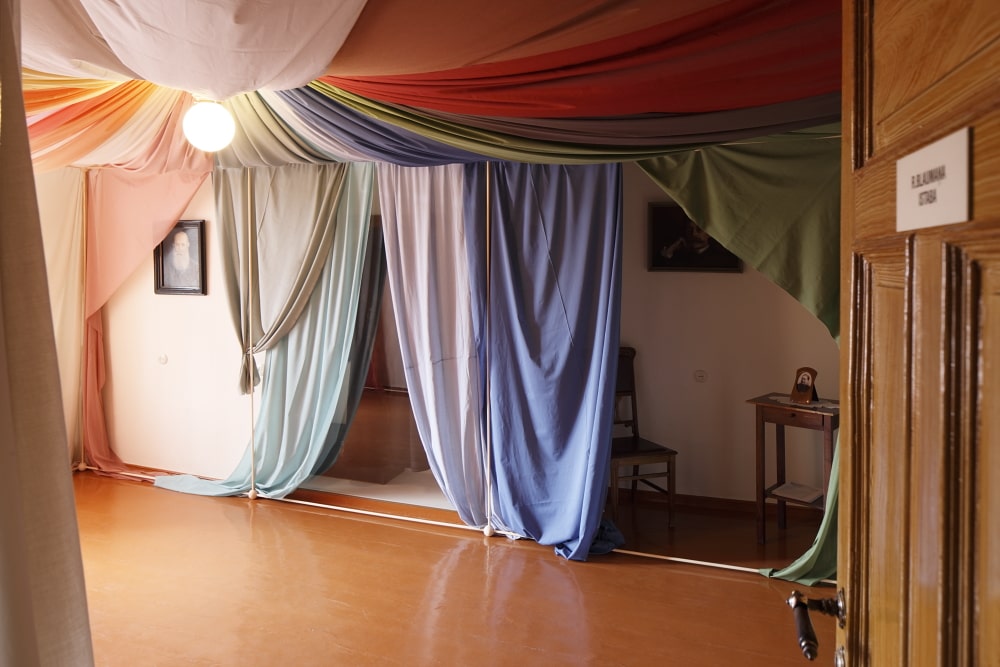 Inga Meldere’s pocket size exhibition, part of the exhibition Slash: In Between the Normative and the Fantasy and in collaboration with the Janis Rozentāls and Rūdolfs Blaumanis Museum, is taking place in the Blaumanis memorial room. At the heart of this episode stands the pursuit of thematic topics – discussions, which in the last decades could be observed among the milieu of historians in Latvian literature and literates that entirely through insinuations deal with these 19th and 20th century Latvian grand writers’ sexual orientation (sources: Zigmunds Skujiņš Siržu zagļa uznāciens (The Entrance of the Heart Robber) (2001), Līvija Volkova Blaumaņa zelts (The Gold of Blaumanis) (2008), Anna Kuzina Blaumanis tuvplānā (Blaumanis’ Close-up) (2013)).

As precedents and vivid examples of Inga Meldere’s interest in using the museum intervention genre, similar collaboration formats can be mentioned – a chain of memorial museums in Europe have invited artists: the Freud Museum in London has created such an exhibition program, The John Soane Museum (London), Huntly House (Edinburgh), and The Brothers Grimm Museum (Berlin). Inviting artists to work with the permanent exhibition to enhance it with creative free interpretations and or comments of an emotional character, curators and historians remind us of the duality of historic facts, which are made by the selection principle’s equivocalness and personal motives. The mainstay of the exhibition is the Rūdolfs Blaumanis letter correspondence, with its tutorial love for young literary talents which deserve the writer’s own anxiety, and show how such emotions could be interpreted further in society. In using the writer’s legendary fur, included in the exposition, as a shelter, bosom and an explosive light body symbol – being warm, all encompassing, fatherly, brotherly – the artist is interested in observing whether our prejudice for homosocial relationships doesn’t limit and divide the wide colour palette, where the friendship forms of the romantic era could and do glisten.