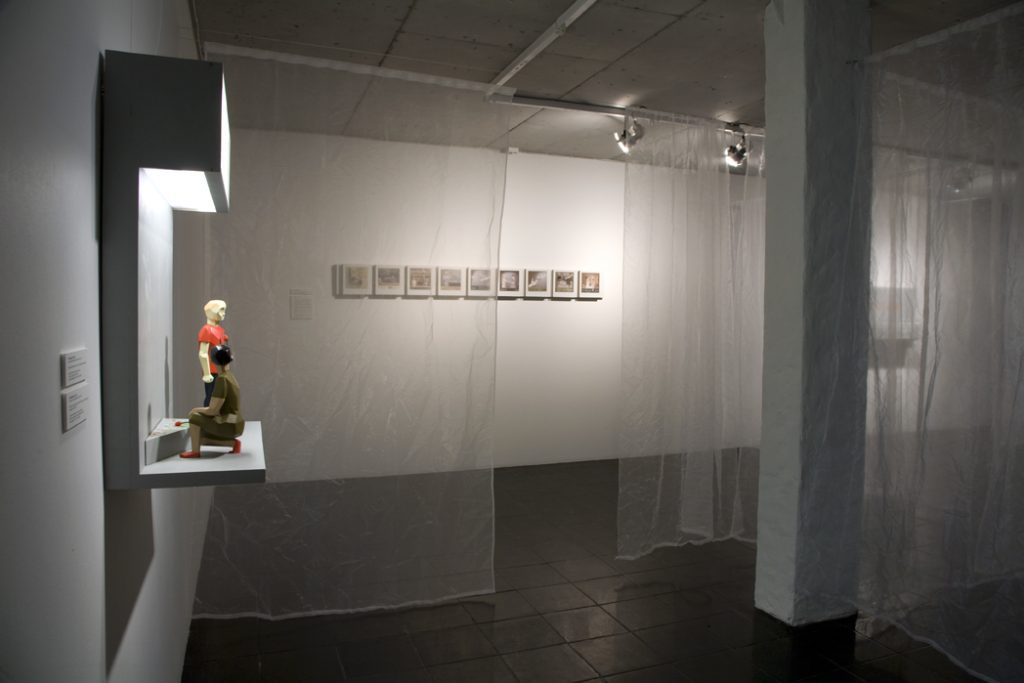 “The solo show opens in May. I am already waking up in the middle of the night and can’t fall asleep anymore. I’m watching videos on launching of space ships and tests of nuclear explosions till 6 a.m. At 6 I am tired and go to bed knowing that I haven’t moved any further, though the launch of a spaceship is damn beautiful!”

Ivars Drulle looks at the part of society we meet in web comments, dating ads or common myths. The exhibition consists of six stories – versions of events that have been previously experienced or heard or read about, events where we seek new justifications for what we are. (For “one thing is “us” we  meet while standing in the queue at cash-desk in Rimi or riding in a trolley, but something completely different is “us” who come back from work and turn into advertisement 50616, who is looking for his better half, or into Kiborg who engages in a controversy whether Liāna Langa is stupid or not”. I.D. May, 2012).

A year ago Pēteris Bankovskis passionately blamed author for living in the present and having a craze with its shapeless format and mundane content. “The sculpture of Ivars Drulle – these tiny toy-like figurines in the tiny doll rooms – are even more realistic as they speak about how fragmented is the reasoning of a modern man, distributed in small compartments, how impossible it is to disentangle from the maelstrom of “information” the  current civilization is muddling along.” A year after the critique, for society – this group of pumpkin-heads – the suffering and uncertainty about their own lives and the world’s order has not diminished, despite that the new political and cultural communication makes once released words to rearrange according to different intonational logics. Therefore Normunds Naumanis in his recent column next to the question about the change of paradigm in Latvian culture proposes an answer that once again is a question: “Isn’t the Ivars Drulle’s undersized Šmit’s figurine which is affectionately praying the God to destroy “all who think and live differently” in fact the embodiment of the God’s merciful smile in miniature sculpture – forgive them for they do not know what they do?”

Ivars Drulle is a sculptor and a teacher. He has studied at the Humboldt State University in California and earned his master’s degree from University of Montana; he is a head of department of 3D design at the Riga Design School. In 2012 Drulle received “Diena” Annual Culture Award and has been nominated to Purvītis Award by Latvian National Museum of Art. In 2009 he had an exhibition together with Māris Grosbahs at Riga Art Space, and currently  another Drulle’s solo show takes place in Umea, Sweden. Ivars Drulle has participated in various group shows in Belgium, Germany, Russia etc.