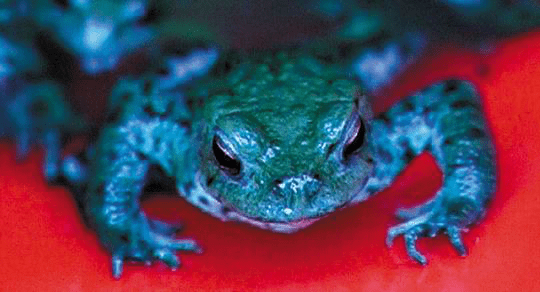 Kim? in collaboration with the New Theatre Institute of Latvia continues the demonstration of theatre and dance performance videoversions and films made by theatre companies. On Tuesday, 19 January everyone was invited to attend the screening of film “Goldfish Game” (2002) by Jan Lauwers and “Needcompany” (Belgium).

The first feature film by Jan Lauwers is a contemporary moral fable, true to life, that develops with the fatality of a Greek tragedy as well as a perceptive and subtle anthropological study of the mechanisms that hold a group together and the forces that work towards its disintegration. At the centre of these forces stands death as the irreducible empty spot that determines and delimits all human behaviour.

The setting of the dramatic events is Liliane and Leonard’s ‘castle’. The eve of the departure of their disabled daughter Lena for a sanatorium in Switzerland is the last chance for the company of friends to spend an evening together. They spend their time playing the goldfish game which is a tradition of their own invention. It has become the playful and nearly childlike expression of their companionship and friendship. But exactly at the moment when the group affirms itself in the game, disaster is announced in the form of the arrival of detective David, who poses a threat to the identity of the group, because he has “the ability to turn this paradise into a living hell.” The story develops into a modern-day fable in which man becomes the sum of his secrets, his past and his moral choices.

Almost all actors and dancers of “Needcompany” take part in the film, but the powerful mix of theatralism and documentalism resembles the unique style of Danish film directors Lars von Trier and Thomas Vinterberg, though Lauwers says he has nothing to do with the Dogme principles. The premiere of the film took place at the Venice Film Festival (in the New Territories (Nuovi Territori)) category in 2002.

“Needcompany” is an international, multilingual and multidisciplinary performance group which debuted in 1986. Jan Lauwers is the company’s founder and artistic director. Jan Lauwers and “Needcompany” have also produced a number of video projects and a full-length film. Grace Ellen Barkey, who has been involved with the company since it was founded, has been making her own productions under its wing since 1992, on the borderline where theatre, dance, performance and art meet. These two artists form the heart of “Needcompany”.