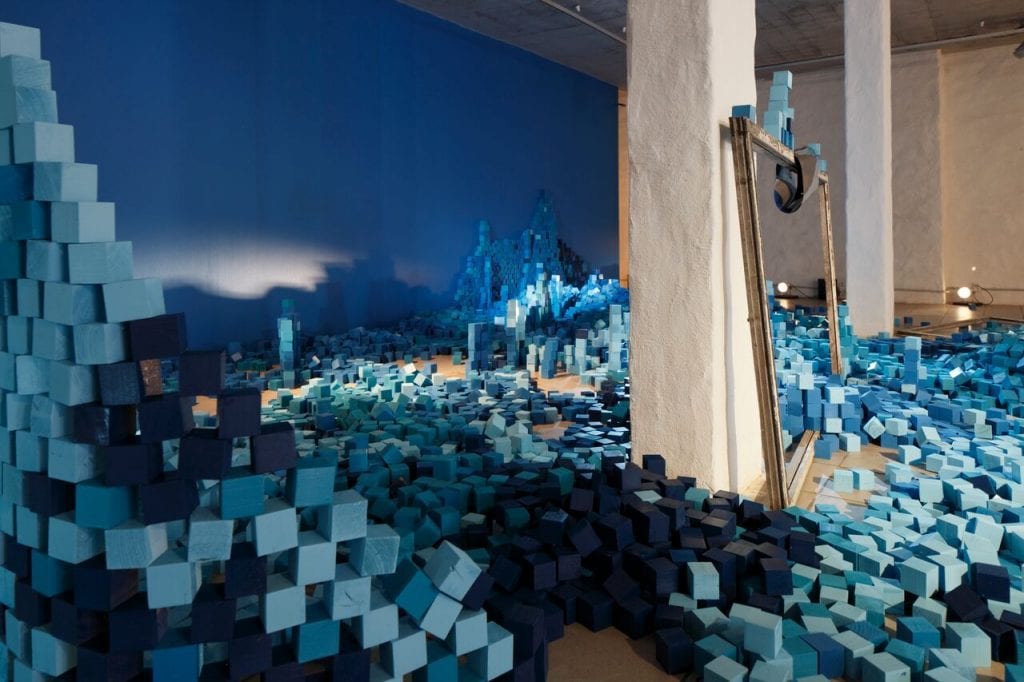 “Poetic Robotism”, project series of Laura Prikule and Eva Vēvere, focuses on the architecture of time and place, systemic and spontaneous construction and deconstruction of different aspects of life. Time managers and counters, private universe and space between uncountable small particles and their larger clusters.

The two artists investigate the 21st century, thinking and by means of a visually exciting language telling about metropolitan suburbs, enlightened by luminaries of the century, and places less affected by the civilization, overpopulation, shortage of drinking water and genetically engineered food.
Interactive installation “Aquatopia” set up in the exhibition room at Kim? focuses attention on the explosive/violent interaction between nature and the postindustrial society. Water is used as a symbol of civilization’s consciousness. The wave of 3-D pixels, cubes or hexahedrons is both a potential flow of space in time and vice versa. The project lightens up sunny and dark aspects of life, the obverse and the reverse, thus creating environment for symbiosis in the exhibition room.

An explanatory dictionary would describe Poetic Robotism as a method of creative activity, which investigates visually the balance between the poetic and the robotic, the ideal and the real, discipline and freedom.
– You may ask, who is a robot?
– At some moment everyone may be a robot, in another-a poet. It is variable.

During the contemporary culture forum “White Night”, on September 10, the expansion of “Aquatopia”: an installation made by Laura and Eva, “Navigation Track” was presented. Decoding the title, the installation is a visual version of gaps in the modern reality. In an interactive aquatope, created in the territory of Kim?, the viewers had to choose their own “navigation track”. Interacting with different objects from the exhibition everyone was able to reveal in sand the traces of collapsed civilizations, swimming fins, caps, memories about once transmitted Morse signals and applying the methods of Poetic Robotism ascertain that their ideas are viable. This will be a nautical journey and adventure in the circumstances of changeable environment.

Laura Prikule uses different communication media in her art. According to the idea or situation of the current project it can be an installation, painting, photograph or other media. The artist explores the ideas of time and space, nomadism and play. Prikule has graduated from the Art Academy of Latvia, the Painting Department, has obtained MA degree in San Francisco Art Institute, at present is doing PhD at the Art Academy of Latvia.

Eva Vēvere employs various media, including installation, graphic and painting. She focuses on the space and different opportunities of its transformation, reshaping it into a piece of art. Interspaces, tunnels, channels, shelters and settlements, help to explore the borders and trajectories of human existence. Vēvere has graduated from the Art Academy of Latvia, the Painting Department, and has studied at the The Finnish Academy of Fine Arts.

The artists work in the territory of a former factory VEF, take part in art events of different kind both in Latvia and behind its borders. Since 2009 have been working together on the projects of “Poetic Robotism”, different events and performances, have exhibited their works at the Gallery 21, the Festival of the Contemporary Art “Survival Kit 2” and at an exhibition “Station of Experiments Laimdota”, in Cēsis,“Performance Art Now Tallinn # 2” et al. The installation “Aquatopia” at Kim? is the 6th episode in this cycle.

The exhibition was on view from August 13 to September 18.