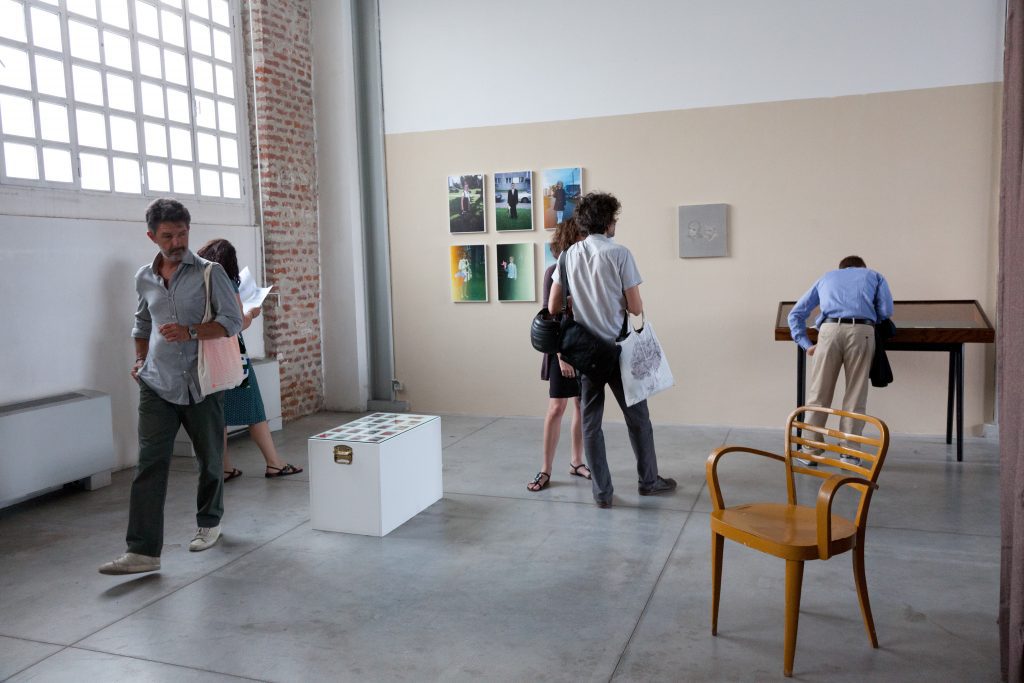 Le fragole del Baltico (“Baltic strawberries”) provides an insight into Latvian contemporary art. Initially intended to complement the Latvian pavilion at EXPO 2015, it has fortunately survived the sad cancellation of the pavilion.

Le fragole del Baltico presents a selection of ten artists, for the most part born around 1980, and mostly exhibited in Italy for the first time: Ēriks Apaļais, Jānis Avotiņš, Ieva Epnere, Kaspars Groševs, Ieva Kraule, Inga Meldere, Daria Melnikova, Ieva Rubeze, Krišs Salmanis and Ola Vasiljeva. The exhibition doesn’t seek its unity in a medium or in a concept; instead it largely forms itself in the practice of its selected artists. Its overall framework is a display of Latvian artists’ works, both existing and new commissions especially created for the exhibition, that in its curation uninterruptedly embraces distinct artistic personalities and individual works in a wide range of media, encompassing: painting and sculpture, applied art and video, and photography and sound. The title, whose ambition is to be poetic and simultaneously ironic, was inspired by the soft-focused, vaguely exotic perception in Southern Europe of the Baltic countries as cold lands, under whose grey skies a fruit such as a strawberry could never grow. In fact, strawberries and other berries regularly buck up the tables of Latvians, starting from the first months of summer right through to the rich autumn season; and contemporary art, which, aside from one or two names that are often not even linked to their country of origin, is little known in Italy, yet is no less vital and present. While the exhibition has no overarching concept or medium, it is somewhat compact, and not just in terms of age. It mirrors a taste: the taste of the curators, but also a taste much more elusive and difficult to pinpoint, shared by this particular generation of artists. Here, some elements tend to reappear, although in very different shapes: a slant to revisit the past, be it personal and familiar or historical, as in Inga Meldere’s paintings and plaster miniatures evoking expressive short stories, or in Ieva Epnere’s series of photographs of Latvian students bringing flowers to their teachers on 1st September, a ceremony originated in Soviet times; a sense for the landscape, the weather, the change of the seasons, that can be found in some of the witty, ingenuous, poetic videos of Krišs Salmanis; a diffuse melancholy, haunting Ēriks Apaļais’ sparse, meditative paintings, as well as Jānis Avotiņš’ series of drawings – anonymous postcards of mysterious locations – paired with a painting of a ghostly couple; a quite peculiar brand of humor, deadpan and slightly nonsensical, an example of which is Ieva Rubeze’s video compilation of Latvian “TV healers” from the 90s  set to a white noise soundtrack, which is supposed to manipulate and improve one’s spiritual energetics; a taste for decoration, applied arts and all kinds of hand-made objects, typified by Kaspars Groševs’ knitted tracksuit, an outfit for an opening event, or by Ieva Kraule’s setting for a fairy tale feast – ceramic plates bearing cartoonish eaters’ faces, and fabric painted with pastry motifs -, or by Daria Melnikova’s literal take on measurements and (de)composition through burned images, a smashed bowl or hand-drawn graph paper; and last but not least, a certain, elusive idea of domesticity, as framed in Ola Vasiljeva’s pun-filled constellation of objects – a woolen rug, a door turned into a blackboard on one side and a bulletin board on the other, and two dada-esque assemblages including glass shoes. Aiming at amplifying the aspect of domesticity and to develop the show as an interior of sorts, the curators have gone for a display whose taste is closer to the 19th century Salon or to the artists’ studio / houses-turned-museums, like that of Riga’s modernist couple Romans Suta and Alexandra Beļcova, than to the Anglo-Saxon 20th century white cube. A display that includes colored walls and curtains, a sofa and armchair, potted plants – a regular feature of homes, artists’ studios or even exhibition spaces; – helps to record the relation between the various artistic elements – the berries in this basket – linked by a peculiar setting where artworks recall and replace and exchange a wide range of physical ephemera – furniture and other items of our daily life.

Ieva Kraule (1987) lives and works in Riga. By usingdifferent media including photography, video, ceramics and painting she references applied arts and architecture of the Soviet era while tracing out theorigins of both personal and collective aesthetic codes. Recent solo exhibitions include Nobody dances like that anymore (2014), gallery 427, Riga; …if all you told was turned to gold(2014), Vita Kuben, Umeå; Loneliness will be my greatest treasure (2014), Kalnciema kvartāls gallery, Riga; 11 out of 10 (2013), Kim? Contemporary Art Centre, Riga, and Long Awaited Holidays by the Abyss of Fictitious Memories (2012) at the gallery Bastejs, Riga. Group shows: Lily’s Pool (2015), Art In General, New York; Vortex (2014), Project Space Garage, Moscow, and Aspen-Kemmern (2014), Kim? Contemporary Art Centre, Riga. Kraule is a co-founder and curator of gallery Four To Seven (427) in Riga.

Krišs Salmanis (1977) lives and works in Riga. He works with the media ofphotography, video, installation, animation and graphic art, creating conceptually charged accumulations-sets characterized by attention to detail and intellectual sharpness of wit. Together with Kaspars Podnieks, Salmanis was part of the exposition for the Latvian Pavilion at the 55th Venice Biennale. Latest solo exhibitions include 100 Books You Need Not Read Before You Die (2015), Kim? Contemporary Art Centre, Riga; North by Northeast. The Deconstruction of the Pavilion (together with Kaspars Podnieks, 2014), Kim? Contemporary Art Centre, Riga; Light (2012) in CAC Vilnius, Lithuania; The Fragility of Trust (2012), gallery Alma in Riga, Latvia; The Earth may be spinning around the Sun, but the World is turning around me (2011), Raum linksrechts in Hamburg, Germany; Moving Landscape (2011), Galerie fűr Gegenwartskunst in Bremen, Germany. He’s a regular contributor to the visual arts magazine Studija and other daily press. The artist is represented by Gallery Alma.

Ieva Rubeze (1977) lives and works in Riga. Her work – poetic videos and installations –are characterized by a clear conceptual core, revelation of thought paradoxes, wit and an extraordinary, timeless radiance. As a member of the artist group Famous Five (together with Līga Marcinkeviča and Mārtiņš Ratniks, 2002) she has represented Latvia in Sao Paulo Biennial, Venice Biennale (2005) and group shows, including: Buket (2008) in Moscow, Time Will Show (2008) in Flensburg andRīga dimd!(2010) in Rostock. In 2014 she won the competition Riga Smiles Again organized by the Boris and Ināra Teterev Foundation in the framework of the program Art in Public Space and her proposed artwork (Ghost) will be implemented in the Riga urban environment in 2015.

Zane Onckule (1982) is a curator, occasional critic and Programme Director at Kim? Contemporary Art Centre, Riga since 2010. She has organised, curated and co-curated exhibitions, parallel programming as well as edited publications and other corresponding materials in collaboration with wide range of artists, curators and theoreticians. She was a co-commissioner of Latvian Pavilion at the 55th Venice Biennale organized in partnership withArt in General, New York. Recent curatorial activities include curating Sink Down Mountain, Raise Up Valley (2015), solo exhibition by Ulla von Brandenburg at Kim? Contemporary Art Centre, Riga; Lily’s Pool (2015), group exhibition at Art in General, New York; Jargot (2014), solo exhibition by Ola Vasiljeva at Art in General, New York and Little Vera (2014), a duo show by Sanya Kantarosvky and Ella Kruglyanskaya at Kim? Contemporary Art Centre, Riga.

Careof (Milan, Italy), founded in 1987,is an Italian non-profit organization for the promotion of contemporary artistic research. It includes people that firmly believe in the value of art as a resource that has the capacity to develop new concepts and promote knowledge. With passion, Careof encourages cultural experimentation in all forms, with particular attention paid to young artists. Developing a dense teaching and exhibition program, documentation services on visual arts] and residences for young creative artists, the organization is also an intermediary between artists, curators, critics and a non-specialized public.