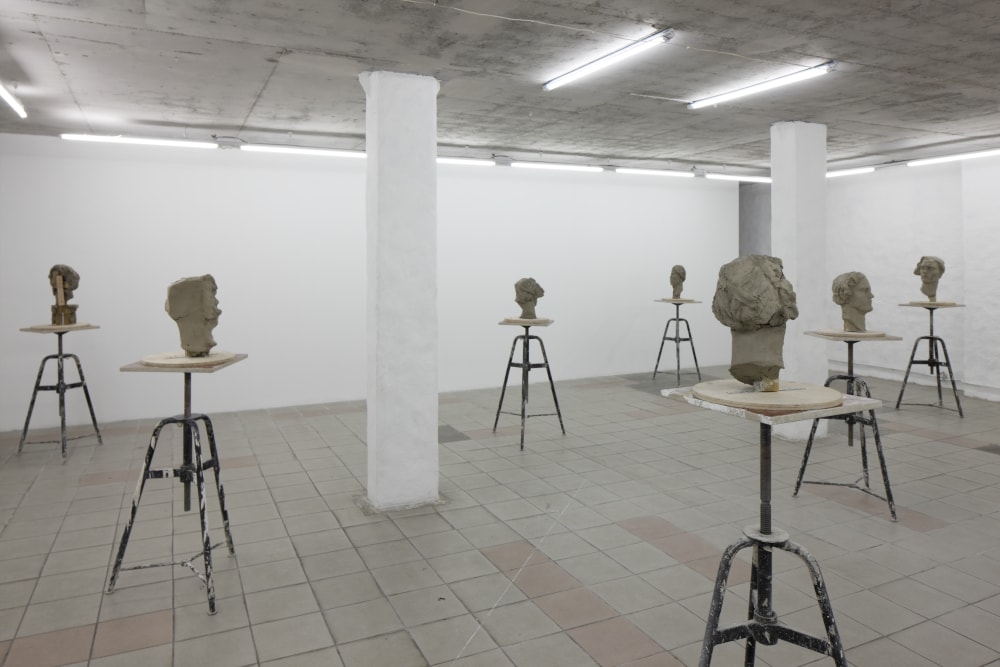 Vera Mukhina (1889-1953) gained acclaim in the sphere of Soviet monumental sculpture after winning the 1937 commission for the Soviet pavilion in the Exposition Internationale des Arts et Techniques dans la Vie Moderne. The resulting sculpture, a towering stainless steel couple entitled The Worker and Kolhoz Woman, quickly became one of the most iconic symbols of Soviet Russia, and an embodiment of the collective socialist ethos. Mukhina’s achievement, a singular one by any female visual artist in the 20th century, has since become a ubiquitous presence in Russian visual culture.

Artists Sanya Kantarovsky and Ella Kruglyanskaya were invited to devise an exhibition in relation to Vera Mukhina on the account of her 125th anniversary and her background as a native of Riga. As the conversation between the artists evolved, it came to include the voices of fellow artists and thinkers living in Riga, as well as Mukhina herself, whose collected writings became a point of departure. This exhibition is comprised of three distinct artistic gestures: a group of posters that are installed both in the exhibition space and in public spaces throughout the city; a site-specific performance culminating in a set of sculptural clay objects; and a documentary video work. Six hand-painted and hand-lettered posters installed in the first gallery illustrate a phrase mined from Mukhina’s 1960 book of collected writings. The consequent works take on form both as art objects and mass-produced printed matter. The premier mode of public visual communication of Mukhina’s lifetime is evoked here, both in the visual language of the posters and in the way in which they are positioned to communicate ideas to the public. The quotes in question, focused on celebrating the meaning of décor, ornament and the nude body among other topics, transcend and complicate the socio-political context in which they were originally conceived. The lasting relevance of these ideas, and their playful opposition to modernist rationalism, is brought into high relief. A week before the opening of the exhibition, nine students from the sculpture department at the Latvian Art Academy were tasked with replicating Vera Mukhina’s 1951 life size female bronze head entitled The Partisan Woman. The austere and forceful portrait, aimed at representing the spirit of the Soviet resistance against the Nazi invasion, has been largely kept in storage of the Riga Bourse museum since its original gifting by the Soviet government. The process of copying a masterwork re-animates the academic methodology to which Mukhina subscribed, having received her education in Paris under the tutelage of Antoine Bourdelle. Each student was prompted to render only what they could see from their single vantage point within a circle around the sculpture. The sum of the final objects encompasses the original human form, conjuring the culture of collective looking and producing. Considered as discreet sculptures, the clay f orms display the subjective and nuanced decision process of their makers. The event served as the source for both the sculptural and the video-based elements of the exhibition. In the second exhibition room, the original worktables on which the objects were made serve as their display plinths. A video installed in adjoining room pairs footage of the sculpture students at work with ruminations by the art historian and cultural critic Janis Borgs on Mukhina’s history and his peculiar hobby of copying master works. The title of the exhibition is borrowed from Little Vera (Ма́ленькая Ве́ра), a perestroika blockbuster directed by Vasily Pichul in 1989 about an uninhibited young woman named Vera. Also legible as Little Faith in Russian, it was among the first Soviet films to explore themes of unchecked sexuality and societal decay, signaling the impending collapse of the Soviet establishment. When measured against her young cinematic namesake, Mukhina’s agency is amplified: a woman among men and bourgeois among proletarians who has left arguably the largest singular artistic mark of the soviet legacy. The series of artistic gestures that comprise this exhibition reconsider Mukhina’s ideas in relation to collective and personal agency, conjuring the lost possibilities of a collapsed society – ideas, interests and methodologies that hold potential for renewed meaning today. Exhibition is accompanied with a talk by art historian Christina Kiaer on June 12 at 6pm (Art Museum Riga Bourse, Doma Square 6, Riga) and an introductory commentary by art historian Alise Tīfentāle. Titled The New Woman of Social Realism: Women Artists and Images of Women this talk will address broad methodological problems of studying Socialist Realism within contemporary art historical scholarship through a specific lens, examining a handful of key women artists of the 1930s: Ekaterina Zernova, Olga Ianovskaia, Maria Bri-Bein and Valentina Kulagina, as well as the main heroine here – Riga-born Soviet sculptor Vera Mukhina.