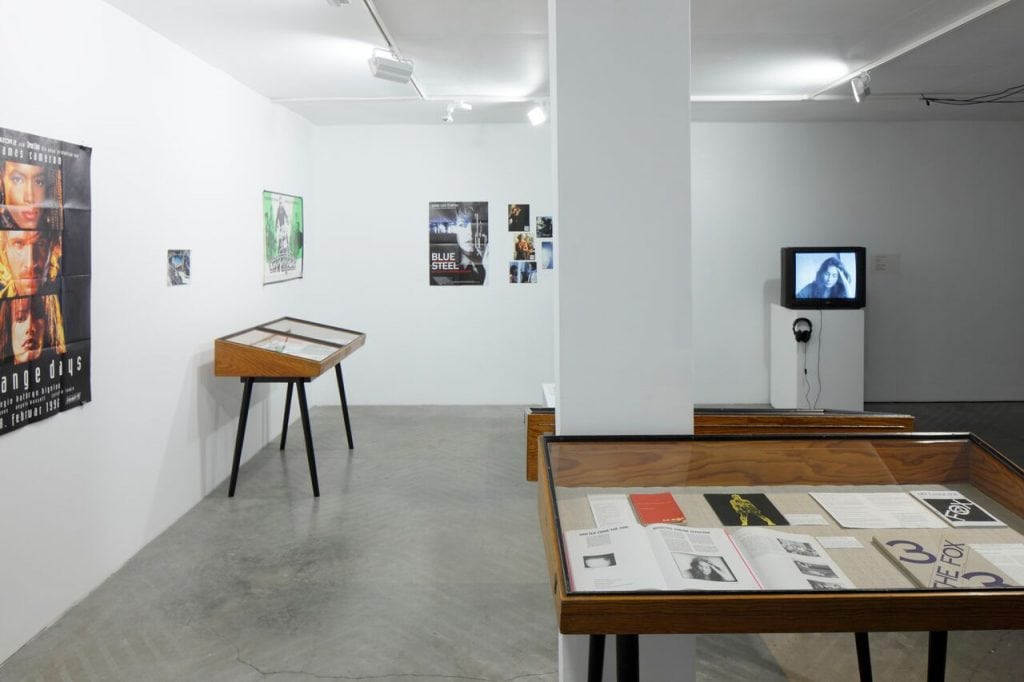 The exhibition was curated by Benjamin Thorel, and was presented in collaboration with castillo/corrales, Paris and Egija Inzule. On view at Kim? from December 17 to January 29. Opening reception December 16, 7 p.m.

“How to begin? The rhetoric of violence in visual arts between genre movies and performance art? Mass media as an anti-model in avant-garde, or the place of women in conceptual art? Paradoxes in criticality and high production value moviemaking? Maybe auteurism, authority and collaborative creativity?

Let’s keep it simple: in the 1970s in New York, Kathryn Bigelow was part of the art world. She collaborated with Lawrence Weiner, Art & Language, Vito Acconci, Richard Serra, and others. This was long before she directed the “action-packed” Hollywood movies Blue Steel (1990), Point Break (1991) or Strange Days (1995) and established herself as one of the very few female film directors with a penchant for genre movies and gender roleplays – something which made her appreciated as much as an auteur than as a case study in film criticism and women studies.

Some might say her conceptualist past isn’t more than just a mere footnote in her biography, a funny anecdote to remember to tell at a social dinner. Others would reply that you can’t happen to sing Art & Language lyrics just by chance. But how formative exactly were these formative years? And also: how can one determine whether one’s early years are just a hitch or the origins of everything that followed? Is this a question of contradiction and self-denial or continuity and achievement?

Breaking Point traces Kathryn Bigelow’s trajectory in art in the 1970s and subsequent progression into the contemporary popular cinematic landscape starting in the mid 1980s. The exhibition starts with Lawrence Weiner’s video AFFECTED AND/OR EFFECTED (1974) of a young Bigelow reading aloud in a mise-en-scène similar to a romantic post-Nouvelle Vague sequence. We then follow her path from contributions to The Foxjournal and the early issues of Semiotext(e) to Cinématographe and L’Ecran Fantastique, from collaborating with The Red Krayola and New Order, from quoting Jurgen Habermas and Mao Tse-Tung to casting Jamie Lee Curtis and Angela Bassett, from participating in the 1976 Venice Biennale to the Oscars 2010, where she became the first woman to win an Academy Award for Best Director with her 2008 film The Hurt Locker.”

The first venue of the exhibition took place in January 2010 at castillo/corrales, Paris and was followed by exhibitions at signal, Malmö in April 2010 and Neuer Aachener Kunstverein in January 2011.

Along with the exhibition, Kim? in cooperation with Kino Galerija invites to see a selected film programm in the cinema K. Suns, Elizabetes street 83/85.