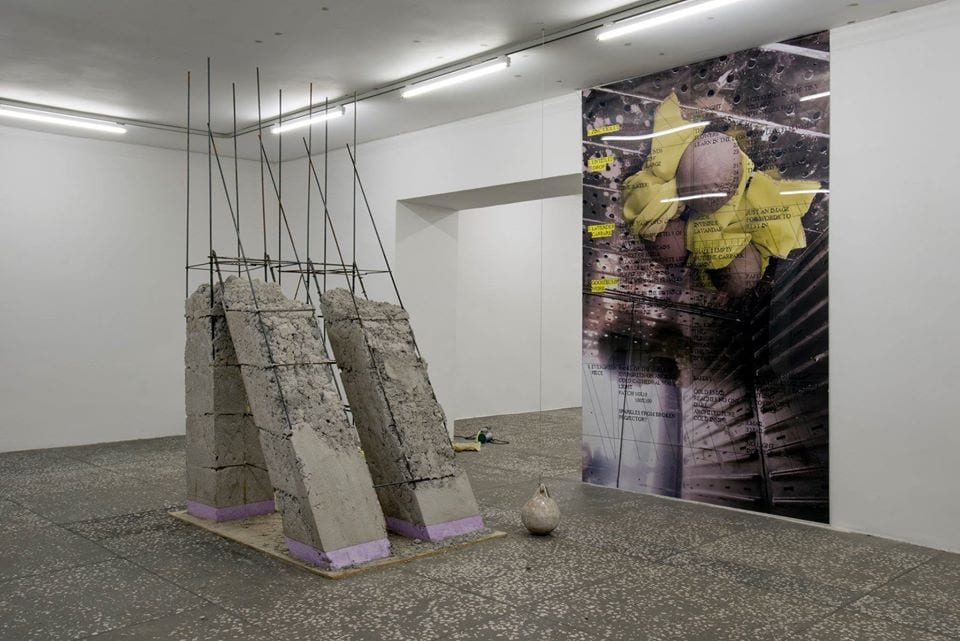 From 19 October, a solo exhibition by Evita Vasiljeva titled “Still Stands and Resilient Nows” will be open at Tallinn City Gallery. Vasiljeva’s first exhibition in Estonia speaks of continuous movement, uncertainty, and possibilities.

The opening will take place on Thursday 18 October at 6pm and the exhibition will be open until 25 November.

The exhibition is co-produced by Tallinn Art Hall and Kim? Contemporary Art Center.

Evita Vasiljeva’s work first strikes us with its weight – cast concrete forms with various lengths of steel armature juttingout of it are a testimony to hard physical labour. This physicality of the work effortlessly connects her practice with the long tradition of sculpture. It is unclear whether the objects are still coming to be or already in a state of decay, which leaves us hovering somewhere between different times. “Still Stands and Resilient Nows” will also feature new ceramic work created during Vasiljeva’s residence at the European Ceramic Work Center (EKWC) in The Netherlands.

Art critic Santa Remere has described the artist’s palette as consisting of “raw construction materials, the sharp and primitive threads with which humans weave their world. Vasiļjeva is interested in the lining—the inside—of this world, which is usually hidden from the eye or is consciously unnoticed. She is attracted to negative space, the repair zone which our eyes are accustomed to excluding from our general impressions. Almost maniacally, she does not believe in the rendered, plastered and polished surface.” ““Still Stands” are intricate and abstract mental constructions. The clay is cracked by steel rods, which penetrate and characterize the structures. The great heat of the making is laid open to view. “Still Stands” are the emblems of timeless duality. The intangible is intertwined with the sculpture,” Vasiljeva describes the works that lend her exhibition part of its title.

Evita Vasiljeva (b. 1985) is a Latvian born artist based in The Netherlands. Shegraduated from the Fine Arts programme at the Amsterdam Gerrit Rietveld Academie in 2013 and worked at the artist residency De Ateliers in Amsterdam from 2014 to 2016. Her latest soloexhibitions include: Manhours in Headquarters, P/////AKT, Amsterdam (2017), Nothing Lost, Nothing Found, Gallery 427, Riga (2016) and Gut House of the Print Level, Kim? Contemporary Arts Centre, Riga (2016). In 2018,Vasļjeva was in residence at HIAP, Helsinki and at the Sundaymorning@ekwc residency-workplace in The Netherlands. In autumn 2018 she will also exhibit in the Showcase Gallery at EKKM.