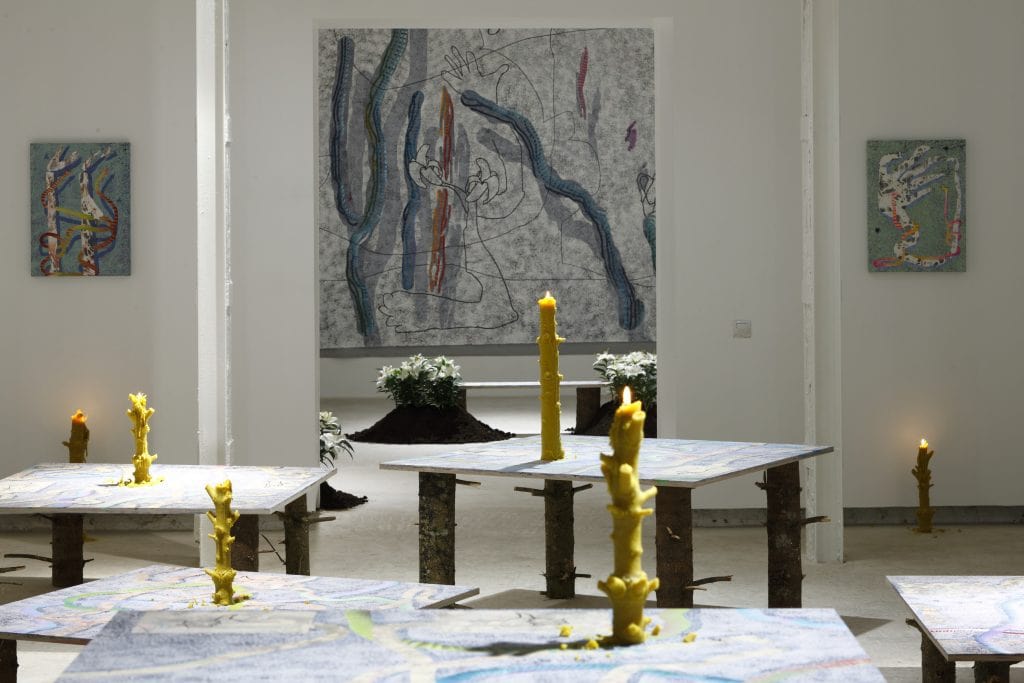 “Disposable Gloves Guide” is Merike Estna’s first solo presentation in Latvia. The exhibition elaborates on a set of themes that have been present in the artist’s recent practice. In her performative paintings and multimedia works in textile, clothing and ceramics, Estna is contemplating on the technology led conversions in contemporary lifestyle, which inevitably contribute to reshaping the social habits of human life. In a society that praises the convenience of automatization, we undergo a restless acceleration that is drifting today’s society away from the traditional labor.  Disposable Gloves Guide questions the future of labor and unfolds the contemporary social concerns we might be facing the end of the world as we know it. The exhibition is a collection combining a selection of her recent works and new productions created for the exhibition at Kim?. The later are continuing a narrative Estna began deciphering during the Baltic Triennial 13 in Tallinn. They depict creatures essential both to the ecosystem and the human kind. The pit of snakes in her work suggests the change for better or worse-like snake sheds its skin to persistently renew, the world will have to regenerate too. The opening night was complemented by Merike Estna’s performance  Red Herring. For the performance, the audience were served artist-crafted potions asinvitation to drink and converse.

As described by curator Maria Arusoo “Red Herring” engages painting as a stage for human interaction. Merike Estna’s practice incorporates what she calls performative paintings with allusions to the digital, the nostalgic, and a romantic reverance for parts of human existence that are mutating, melting or slipping away. Inspired by Aleksandr Pushkin’s  A Feast In The Time Of Plague, Estna plays with our ideas of Romantic forms of representation and social space.

Merike Estna (born in Estonia 1980) lives and works in Tallinn, Estonia. She has graduated from the Estonian Academy of Arts with a Bachelor’s degree in painting and from the Goldsmiths College, University of London, in 2009 with the Master’s degree in art practice. Her performative work has been exhibited at Chart, Kopenhagen, Performa 17 and Art in General, NYC, and Kiasma, Helsinki. Her solo exhibitions have been exhibited at Kunstraum, London, Karen Huber Gallery, Mexico City and others. She was awarded Konrad Mäe prize, Estonia 2014 and has been teaching at the Estonian Art Academy since 2014 and at Tartu Art School since 2016. Her works in public collections include: Kumu Art Museum, Estonia; Tartu Art Museum, Estonia; Loviisa City Collection, Finland.