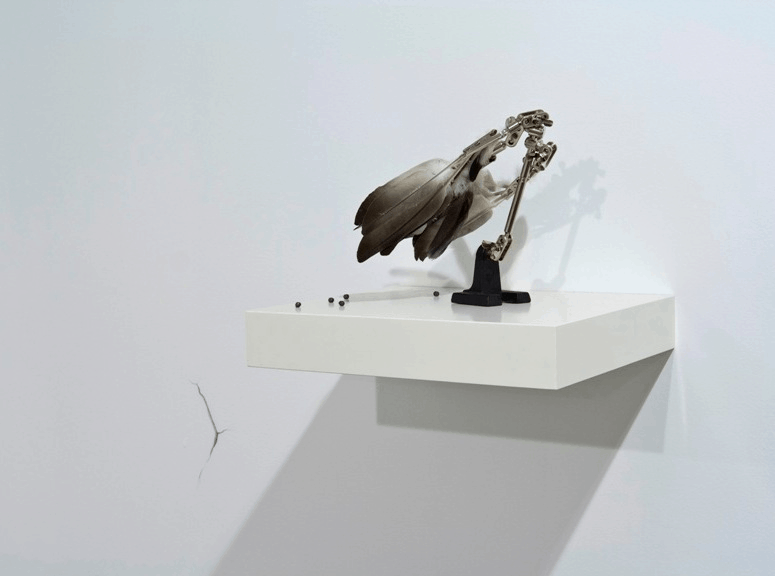 During Programme No. 5, from 8 October until 1 November, 2009, exhibition “Entropy Cube” by Latvian artist with an extensive international experience Miks Mitrēvics (1980) at the Kim? / VKN Gallery. It  showcased the artist’s latest accomplishment – drawings and installations on entropy.

The works at Miks Mitrēvics’ latest exhbition have been created in collaboration with artist Kristīne Kursiša.

Entropy, defined as inevitable and steady deterioration of a system, always gains the upper hand over order and progress established by the humanity. Its force is inevitable, even brutal, and like an unstoppable inertia overturns everything in its way. The length of time order can withstand entropy is only a matter of time. Sooner or later grass cracks asphalt and temple turns into ruins. Disruption is inescapable; time will come for the white cube of a gallery.

The inspiration for the exhibition came from the VKN Gallery itself which reminds one of the iconic white gallery cube as well as from everyday observations (the artist’s studio is located in a workshop of a former textile factory) and imaginary discussions with American artist Robert Smithson (1938-1973).

Miks Mitrēvics lives and works in Riga. Together with artist Evelīna Deičmane he represented Latvia in this year’s Venice Biennale with the exposition “Fragile Nature”. In 2008 Mitrēvics received the “Swedbank” art award and was nominated for the Purvītis award. Over the past years, the artist has often attracted attention to his works in various international events, for example, at the exhibition “Buket”, State Contemporary Art Centre, Moscow, Russia and at Manifesta 7, the European Biennial of Contemporary Art, Rovereto, Italy. In 2006, he received the “Diena” award.

By the end of the year Mitrēvics had another exhibition in Riga – this time at Riga Art Space, but at the beginning of the next year – an exhibition at Nassauischer Kunstverein Wiesbaden, Germany.