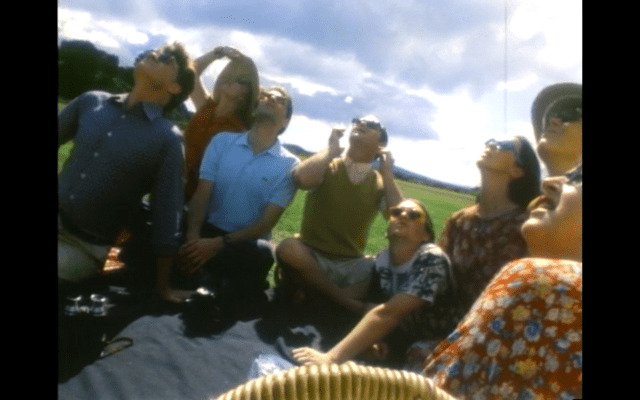 Images 1 of 1
Presentation of Chris Kraus’ “Gravity and Grace”

On May 5, 2011, at 7 p.m. in the Kim? lecture room a presentation of Gravity and Grace, film by American writer and filmmaker Chris Kraus, took place.

Gravity and Grace (1996) is a low budget experimental feature movie, which Chris Kraus described as an amateur intellectual’s home video. The film tells the story of a despairing middle class Kiwi woman, Ceal Davis, who meets Thomas Armstrong, a charismatic mystic who believes in flying saucers. Ceal joins his group of followers at the Extraterrestrial Institute and is contacted by aliens, who tell her that the world is about to end by flood. The group prepares to be rescued by flying saucers. When the flood and flying saucers do not eventuate the group convinces themselves that their actions have prevented the catastrophe.

A sub, or alternate, plot to the movie involves Gravity and Grace, two small time hustlers in Auckland, who fall out with each other. Following a chance encounter with Ceal, Grace decides to infiltrate the Extraterrestrial Institute as an undercover anthropologist. Disenchanted with New Zealand, Gravity emigrates to New York, where she lives as a starving artist. The film follows Gravity’s life at the lower levels of the New York art world. She meets a writer who complains about his lot, teaches English to semi-illiterates, meets a black man in a bar, then has her work critiqued and rejected by a museum curator. After leaving the museum, Gravity has a vision of a disc of whiteness in the sky.

Gravity and Grace is the last movie the Los Angeles based author and filmmaker Chris Kraus realized. Writer and filmmaker, Chris Kraus has explored a variety of different subjects ranging from feminism, gender politics, sex workers, philosophy and love. Chris Kraus is a co-editor with Sylvere Lotringer and Hedi El Kholti at Semiotext(e), America’s premiere independent press. 1997 she published her first novel I Love Dick. The novels and essays Aliens and Anorexia (2000), Video Green: Los Angeles and the Triumph of Nothingness (2004), Torpor (2005), Where Art Belongs (2011) followed. While today Chris Kraus seems to be mostly known for her writing, her filmography is not less striking. Her experimental movies, produced during the time she spend in New York (1982 – 1992), till May 8 are on view in the exhibition Valoda mākslā / Two Occasions. Fig. 7 – Konkrēti piemēri.

Before the screening Egija Inzule, the curator of the exhibition, introduced the work of Chris Kraus and the movie Gravity and Grace.

The language of the film is English. Screen time – 87 minutes. Free entrance.