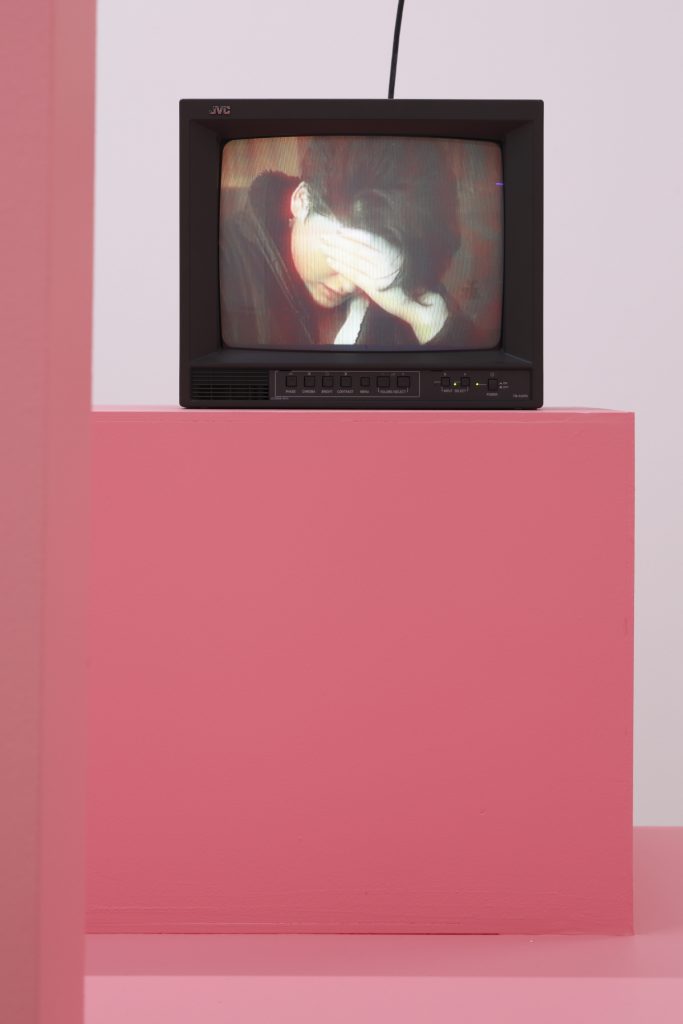 Images 1 of 1
READINGS: Gone Through The Roof

Kim? Contemporary Art Center invites you to the online readings Gone Through The Roof, part of Ieva Kraule-Kūna’s solo exhibition Where My Cards Lay, on December 3rd from 3 to 7 PM.

The final decade of the past century was a time of radical change in the post-Soviet Baltics—a political, social and economic vertigo accompanied by national elation, on the one hand, and fear, insecurity and confusion on the other. This was a period of intense change, in which processes of renewal and self-redefinition took place across all aspects of life, including economic, interpersonal, and cultural. At the same time, a novel state-concept was introduced to Baltic life, ushering a strange parallel world into being—including a cultural avoidance of top-down policy and its conventions. Everything had to be learned and consumed anew, as the space-time of culture was radically reorganizing itself into newly revised chaos, with no map or means of navigation along the way. Instead, a simultaneity, changeability, and murkiness (“fogginess”) introduced by the postmodern era prevailed, evidenced by new state and protection rackets, Ponzi schemes, bribes and forgeries, raves and banquets, easy money and violence, a rise of different spiritual practices and ideologies, shadow economies, and growing rifts between local Latvian and Russian speakers.

At the hybrid-conference-readings Gone Through The Roof, held as part of Ieva Kraule-Kūna’s solo exhibition Where My Cards Lay, theorists, critics and curators will look back from various positions and subjective experiences and share their perspectives on the “unconquered” decade of the 1990s, a time that, as the artist argues, is still here.

An insight into the reading topics:

In her presentation Why Iveta?, Helēna Demakova will talk about this mysterious person and her achievements in the 90s art world in Latvia. All this will be contextualized with reference to the international success of Latvian artists.

Waiting for Wild Capitalism: Latvian Art and the Post-Socialist Condition in the 1990s

The geopolitical shifts of the 1990s stimulated “self-searching” and the development of new collective identities, based on systems of regional and political economies. An indiscriminate adoption of Western and neoliberal capitalist values became a tool for overcoming past traumas. Nationalism alternated with a thirst of proving, at home and to the international public, a belonging to the Western cultural space and, with this, yielding to a new kind of colonization. The forms that contemporary art took in the 1990s likewise manifested these geopolitical shifts either literally or metaphorically, adapting institutions, styles and themes to Western models. The points of conflict between the earlier values and the “new” were brought to the fore across different intonations in the works Latvian artists made in the 1990s, when universally existential reflections alternated with ironic critique both against capitalism and Soviet socialism. This text examines the ambivalent role contemporary art played in constructing the “new identity” of the 1990s’ society, along with the often aleatory ways in which the strange inter-space between post-socialism and pre-capitalism was reflected in Latvian art. Keeping in mind that the point of view of personal experience and “foggy” memories is emphasized in the project statement, the official line will be eschewed, instead looking for and analyzing random parallels, references and motifs within Latvian artworks and art criticism of the 90s, which are indicative of a dialogue with the new aesthetical end ethical values and the articulation of one’s individual experience in the context of wider historical occurrences.

Adidas Made Me Hardcore

The title of the presentation is an homage to Fiorucci Made Me Hardcore, a 1999 video by British contemporary artist Mark Leckey, a documentation of both Britain’s underground club scene and the persistent nature of post-digital nostalgia. As the era which encompassed both the collapse of the USSR and the last of the pre-internet age, the 1990s are often regarded with nostalgia—but what does this nostalgia mean specifically for Eastern and Central Europe and their place within global culture?

This presentation will cover the so-called “post-Soviet aesthetics” which emerged in global fashion and pop culture in the mid-2010sand the visual and ideological legacy of the 1990s in its DNA. It will also explore the inevitable political implications of cultural imagination, the persistence of regional stereotypes, and the fictional “East” where time stood still.

Fear of Feminism in Latvia

According to a prevailing opinion in post-1989 Eastern Europe, art has no gender and it shouldn’t be mixed with politics. Art representatives in the region are doggedly persistent in repeating that there’s no “gender trouble” within these societies. Attempts at adapting to the ideology of neoliberalism are combined with the inertia of modern discourse, including the cult of genius and the idea of art as an absolute and universal value. These and other myths have produced the fear of feminism prevalent in the region, the manifestations of which can also be observed in present-day Latvia. The symposium’s open reading and accompanying publication will outline the perception of feminism in Latvia’s art scene, with the cultural situation of the 1990s and its characteristic (anti-/post-) feminist attitude serving as a starting point of reference.

A Bellyful of Valūta, A City Full of ‘Chanel’: Buying Art in Post-Soviet, Proto-Capitalist Riga

An American art historian traveling to newly liberated Latvia in the early 1990s for research, I found a fledgling consumer society, a new generation of artists poised to critique this new material reality, and an unexpected opportunity to bridge the two when I was asked to serve as an acquisition agent for the West’s largest private collection of unofficial and nonconformist art from the former USSR. This presentation will share an outsider’s observations about evolving attitudes towards a local commercial art market, promoting a national cultural heritage even as that national identity was undergoing revision, and those incredible years when Riga’s sidewalks evidenced an inchoate street culture of counterfeit logo-wear, banana peels and UV sunglass decals.

Order from Chaos: Taming Freedom and Civilizing Selves in the 1990s

Helēna Demakova (b. 1959) is an art scholar, critic, curator and politician. She has been curator of many contemporary art exhibitions in Latvia and abroad, including Latvia – the Somersault of the 20th Century, Riga (1990), Monument, Riga (1995), Rauma Biennale Balticum, Finland (1994), the Latvian section of Personal Time: Art of Estonia, Latvia and Lithuania, Warsaw and St. Petersburg (1996), the Latvian pavilion at the Venice Biennale (1999, 2001). She has published many texts on contemporary art, the most significant of which are collected in the book Different Conversations (2002). She was Special Adviser to the Prime Minister on Cultural Issues, and Minister of Culture of Latvia (2004-08).

Santa Hirša is an art historian and critic. She is the recipient of the Normunds Naumanis Award in art criticism (2021) and has authored books on Krišs Salmanis (2018) and Andris Breže (2020). Her professional focus is on researching contemporary and Soviet-era art, looking for new layers of meaning and ambiguity in the relationship between visual culture and social events.

Anastasiia Fedorova is a writer and curator based in London. She is a regular contributor to Dazed, i-D, GARAGE, Kaleidoscope Magazine, 032c and SHOWstudio among other titles. In her writing and research, she specialises in photography and visual culture, the political and social aspects of fashion, the history and theory of BDSM, and LGBTQ+ issues. She is the founder of Russian Queer Revolution, a platform for LGBTQ+ creatives from Russia. Anastasiia is an acknowledged specialist in the fields of visual culture and fashion, and has appeared as a speaker at ICA London, the Barbican, and the British Film Institute. She has been a guest lecturer at Chelsea College of Art, University of Arts London, Birkbeck, Middlesex University, New York University, and University of Michigan.

Mark Allen Svede is a Senior Lecturer in the Department of History of Art at The Ohio State University, Columbus, and teaches in the multidisciplinary OSU Film Studies program. For twenty years, he acquired Latvian contemporary art for the Norton and Nancy Dodge Collection of Nonconformist Art from the Soviet Union, now housed at the Zimmerli Museum of Art, Rutgers University, an effort which culminated in the 2002 exhibition and book Art of the Baltics: The Struggle for Freedom of Expression under the Soviets, 1945-1991. He has published numerous articles, online entries and catalogue essays on the topic of 20th-century Latvian art, film, visual and material culture. He organized and produced the restoration of Andris Grinbergs’s 1972 underground film Pašportrets (Self-portrait) at Anthology Film Archives, NYC, and served on the international jury for the 2017 Purvītis Prize.

Dace Dzenovska is Associate Professor in the Anthropology of Migration at the University of Oxford. She is the author of School of Europeanness: Tolerance and Other Lessons in Political Liberalism in Latvia (Cornell, 2018), and the principal investigator of the Emptiness: Living Capitalism and Democracy After Postsocialism (ERC, 2020-2025). Her research interests pertain to the changing relationship between people, territory, state and capital in Eastern Europe and the former Soviet Union.

Līna Birzaka-Priekule is a Curator of Exhibitions at the Latvian National Museum of Art and an art historian. She holds an MA in the History of Art from the Art Academy of Latvia. She is currently studying for a PhD at the Art Academy of Latvia, researching socio-political criticism and activism in the Latvian contemporary art scene. Since 2016 Birzaka-Priekule has worked with numerous artists’ solo and group exhibitions, including those of Laris Strunke, Viennese Actionist Hermann Nitsch, Ieva Epnere, Amanda Ziemele. Since 2019 she has been head of the Purvītis Prize Expert Panel as well as a member of the Visual Art Expert Panel of the Ministry of Culture of Latvia.

Zane Onckule (b.1982, Latvia) is Curator and Programme Director at Kim? Contemporary Art Centre in Riga (2010-2017 and since 2020). She was co-commissioner of Baltic Triennial 13 (2018) and co-commissioner of Latvian Pavilion at the 55th Venice Biennale (2013). Selected curatorial projects: solo exhibitions by Sophie Thun (together with Zenta Dzividzinska), Kim? (2021), Tobias Kaspar, Kim? (2019), Rodrigo Hernandez, Kim? (2017), Ieva Epnere, Art in General, New York (2017), Ulla von Brandenburg, Kim? (2015), Ola Vasiljeva, Art in General, New York (2014), and group exhibitions Cold Time Out of Joint, Kim? (2021), Faktura (For A Nervous Spirit), Kim? (2020), Balticana, Hessel Museum of Art, NY (2019), Le Fragole del Baltico (together with Simone Menegoi), CareOf, Milan (2015), Vortex at Garage Museum of Contemporary Art, Moscow (2014), Little Vera, duo exhibition by Sanya Kantarovsky and Ella Kruglyanskaya, Kim? (2014). She studied Art History at the Art Academy of Latvia, Communication Science at the University of Latvia and Photography at the Zurich University of Arts, and holds a BA from the Banking Institution of Higher Education in Latvia (2004) and an MA from the Center for Curatorial Studies at Bard College, NY (2019). Onckule’s writing and reviews have appeared in Artforum, MoMA Post, Art Monthly, Echogonewrong.com, Kultūras Diena, Arterritory.com, Foto Kvartals among others.

Ieva Kraule-Kūna (b. 1987, Riga) holds an MA in Fine Arts from the Sandberg Instituut in Amsterdam. The artist mostly produces sculptural objects using various materials (ceramics, stone, metal, etc.), accompanying them with short stories in which the absurd adventures of fictive characters alternate with cockeyed interpretations of historical facts. In her works, Ieva Kraule-Kūna references fetishism, history, artisanship and aesthetics of the Soviet era while tracing origins of both personal and collective aesthetic codes. She has participated in group and duo-exhibitions in Riga, New York, Paris, Vilnius, Moscow. Kraule-Kūna is the recipient of the Kim? Residency Award 2017 in collaboration with Gasworks, London, andfinalist of the Purvītis Prize 2021. She is a co-founder of 427 gallery in Riga and co-curated its program from 2014 to 2016, and co-headed LOW gallery.

Readings will take place in Latvian and English. After the event, the recording will be available to the public.