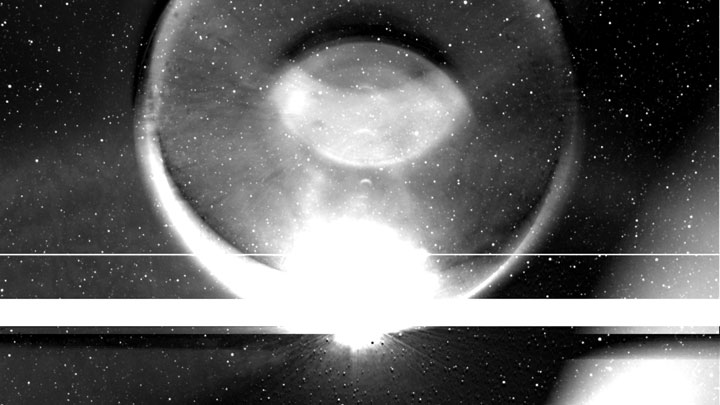 During Programme No. 7, 16 January until 7 February, 2009, video installation “Black Rain” by Semiconductor at the Kim? / RIXC Gallery. Semiconductor is a project founded in 1997 by British artists Ruth Jarman and Joe Gerhardt. Semiconductor creates works of moving images which reveal our physical world in flux: cities in motion, shifting landscapes and systems in chaos.

“Black Rain” is sourced from images collected by the solar mission twin satellites STEREO. Working with STEREO scientists, Semiconductor collected all the image data to date, revealing the journey of the satellites from their initial orientation, to their current tracing of the Earth’s orbit around the Sun. Solar wind, coronal mass ejections, passing planets and comets orbiting the Sun can be seen as background stars. The Milky Way passes by.

As in their previous work “Brilliant Noise” (which was exhibited at “Spectropia” at the Riga Art Space in 2008), Semiconductor continues to work with raw scientific satellite data which has not yet been cleaned and processed for public consumption, thus we are reminded of the presence of the human observer who endeavours to extend our perceptions and knowledge through technological innovation.

Semiconductor has won many notable awards including “Best Film at the Cutting Edge” by the British Animation Awards 2008. The recent residencies have facilitated the creation of works strictly connected to a particular place, for example, works done at the NASA Space Sciences Laboratory, UC Berkeley, USA.