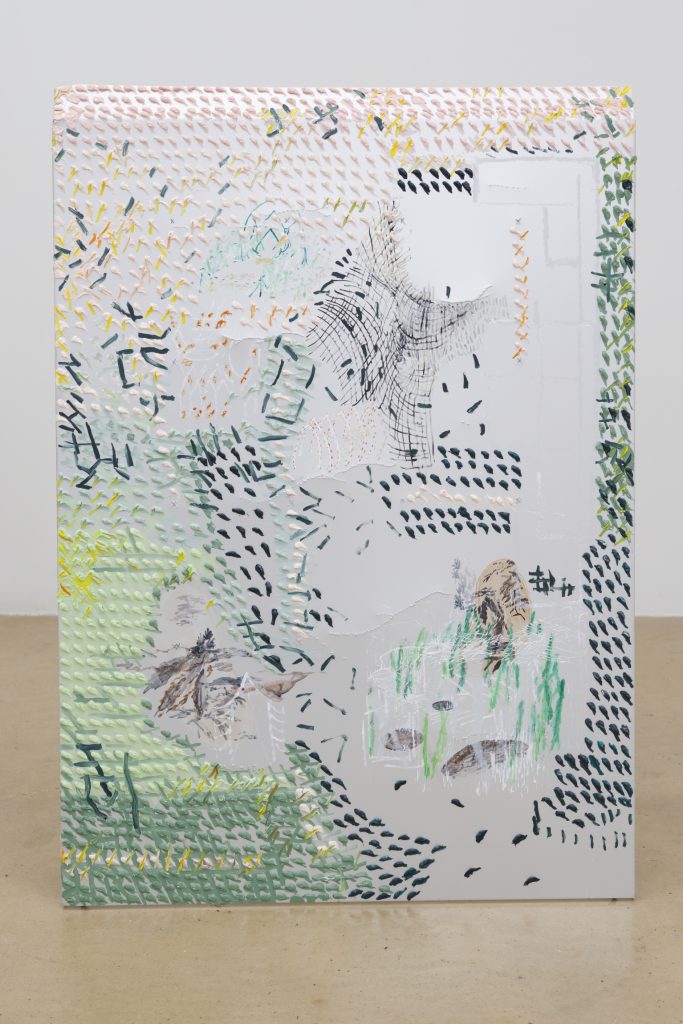 In the context of the exhibition, didactic ideological system(s), typically masked by and presented as seductive images in the context of their mass distribution, pave the way for a series of variable-format works which take their ideological construction into consideration. For Sīle, the issue of widespread resistance to populist speech is inculcated in an individual’s critical thinking skill, which becomes further enmeshed in the dominant cultural narrative and its multitude of ideological battlegrounds. Sīle insists that this is a pivotal (artistic) position to occupy.

A new body of works by Sīle divide images into the mnemonic, semantic, and formal devices. Sīle bridges the gap between forensic scenes and laboratory-like environments, drawing them together and suggesting that associative visual images and rhetoric are worthy of our critical examination. The work further questions the prevailing rhetoric as an act of delusion, lies and fear mongering across the various reigning powers. Departing from the experience of encountering the Latvian State Socialist Republic Encyclopaedias in her youth, Sīle indexes the complex set of relationships which coexist amongst living generations—conscious, unconscious—with the past and its impact on individual and group reasoning and argumentation patterns today. The appalling confrontation/s unfolding in Europe at the moment make these theoretical/artistic inquiries more poignant.

Part One (Bi-Dža) includes large-format, repurposed leather-covered panels containing visual narratives in the form of small image and text applications. Simultaneously, they are a caricature of the-shrink-couch-meets-Soviet-era-apartment-upholstery-meets-Encyclopaedia-spine.

Part Two (Ge-Ilk) is a “special operation” unfolding on the surface of medium-format aluminium plates. While the mark left on them by Sīle is a heterogeneous blend of colourful, semi-fluid materials further adorned by gelatin/graphite pencil, the prevailing message here is to evoke the camouflage techniques of wartime deception strategies (WWII, Cold war, now…).

Part Three (Mir-Nul) could be misinterpreted as pure cuteness; however, the work was developed out of the sheer exhaustion of dramatically shrinking a rectangular painting format into a single dimension. As a result, the painted skin of the surface is rolled up and crowded onto a skinny stick-trampoline, also referred to as “stick-cattail”.

Elza Sīle (CH/LV) is a visual artist. Sīle combines mental imagery with analytic divisions and builds up an interwoven vocabulary of psycho-spatial typologies in flux. In 2019, Sīle graduated from ZHdK Zurich. In September, Sīle is scheduled to have a residency at ISCP New York provided by Kim? Contemporary Art Centre. Recent solo exhibitions include at PHILIPPZOLLINGER (Zurich, 2021); unanimous consent (Zurich, 2020) and Kulturfolger Zürich (2020). She has participated in numerous two-person and group shows, such as at Haus Konstruktiv (Zurich, 2022); Misako & Rosen (Tokyo, 2022); Kim? Contemporary Art Centre (Riga, 2020); Kunsthalle Zurich (2020); Hamlet (Zurich, 2020) and Galerie Kirchgasse (Steckborn, 2020). In 2020, Sile was a recipient of the Werkschau Prize Zurich and in 2021, of the art stipend City of Zurich.