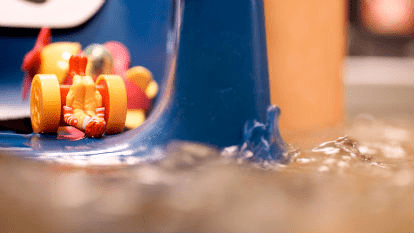 From 4th of September, until 3rd of October, Kim? / RIXC gallery together with  The Latvian Centre for  Contemporary Art and the Contemporary Art Festival SURVIVAL KIT 2 invites to Danish artists’ collective “Superflex” film work “Flooded McDonald’s” (2006, 20′).

“Flooded McDonald’s” is a film work in which a life-size replica of the interior of an empty McDonald’s burger bar gradually floods with water. Furniture is lifted up by the water, trays of food and drinks start to float around, electrics short circuit and eventually the space becomes completely submerged. The source and the reason of the threat are unseen, but it is certain that there is no escape. Emphasizing this dramatic build-up, “Flooded McDonald’s” makes use of the editing and camerawork of Hollywood disaster movies.

With a diverse and complex practice that engages art, design, commerce and economic structures of dependency, the Copenhagen-based artists collective “Superflex”: Rasmus Nielsen, Jakob Fenger and Bjørnstjerne Christiansen, challenges the role of artists in contemporary society and explore the nature of globalization through ongoing collaborative projects.

Since 1993, they have worked on a series of projects to do with economic forces, democratic production conditions and self organization. The artists have examined alternative energy production methods and commodity production plants in Brazil, Thailand and Europe in their projects both exposing and questioning the existing economic structures.


The exhibition takes place in the frames of the annual festival of contemporary art Survival Kit 2 by The Latvian Centre for Contemporary Art (LCCA), and is organized in cooperation with the Danish Cultural Institute in Riga, and supported by The Danish Arts Council.