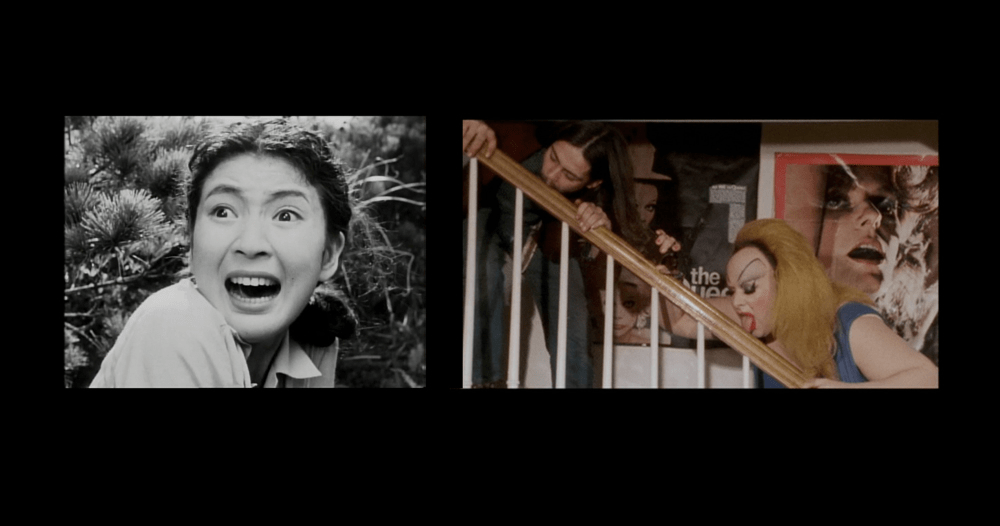 From July 2 to August 7 at Kim? – “Susan Sontag’s camp cinema”. The exhibition was 28 days long film session of film pairs, selected by artists, curators and theoreticians. The exposition has been organized applying the phenomenon of the USA motion picture industry in the 20th century 1930s – a double bill principle when cinema theaters would exhibit two films for the price of one. The combinations of film pairs varied, depending on the following possible patterns – a high-budget main feature and a short film or a main feature followed (or preceded) by a B category film (or an “extremely experimental” film).

As a part of this exhibition 14 Latvian artists, curators, theoreticians and thinkers belonging to other related professions were invited to turn to the term camp explored by an American publicist Susan Sontag and, through its manifestations in cinema the author named in her essay “Notes on ‘Camp’” (1964), chose their own “campy” film pair.

It is still not entirely clear what camp signifies and what it could signify. In a diverse and versatile society it is not used to define the right and the wrong, it rather describes sensibility in relation to the perception of culture phenomena, objects or items, which also affects our taste, opinions and establishes our values. The term camp is like a guide that helps to see different new interpretations for dominating and “outdated” opinions and to figure out how these opinions can be changed and replaced by new ones. Camp is crucial in the creation of a critical point of view in any sphere.

‘Splendid, Stephen! You’ve really gotten the idea.’
‘I don’t know if I have or not. It seems such an elastic expression.’
‘Actually it isn’t at all. But I admit it’s terribly hard to define. You have to meditate on it and feel it intuitively, like Lao-tze’s Tao. Once you’ve done that, you’ll find yourself wanting to use the word whenever you discuss aesthetics or philosophy or almost anything. I never can understand how critics manage to do without it.’1

Susan Sontag’s “Notes on ‘Camp’” are legendary. In 58 enumerated paragraphs the author attempts to grasp the meaning of the term, providing examples from literature, music and art, describing personalities (for example, like Greta Garbo) that embody the aspects of camp, also naming films that in her opinion are camp. The 17 films, mentioned in this essay, were shown at Kim? during the film show.

At the same time, from July 6 to 10, a summer camp organized by Kim? took place. The theme of camp was continued by a Latvian translation of Susan Sontag’s notes, and also by a lecture of a German painter Michael Krebber.