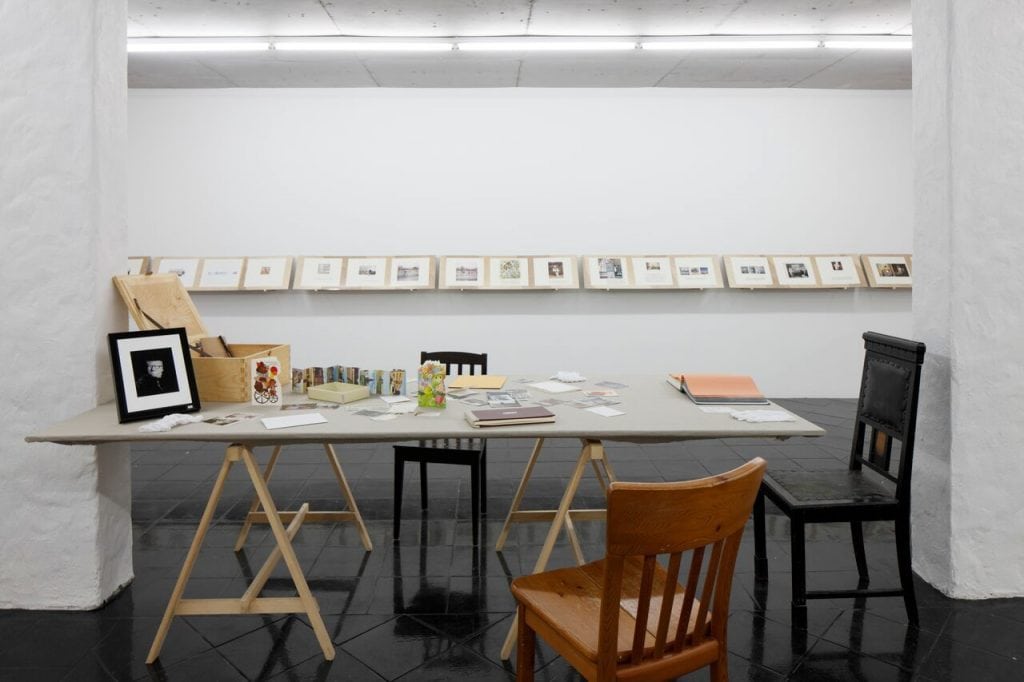 Story of “Mimi’s Diary” began on October 4, 1944, when communists were approaching Latvia and Tamara Zibner’s grandparents, Mimi and Pipi, together with a newborn son left their home in Saldus. As refugees they spent five years in Germany, ruined during the war, until they finally moved to the USA.

Zibners has dedicated last five years to careful reconstruction of her grandparent’s story of exile and immigration. She shows it through photographs and collages that are complemented with fragments of Mimi’s diary she were writing from 1943 to 1971.

Making a research of her family’s history, the artist keeps distance from specific documentalism. She turns to a myth of lost Latvian identity, and her way of depicting it is fictional. Bypassing cynical generalizations about integral nonentity, the theme is constantly topical for almost all families in European countries that have experienced World War II.

“Mimi’s Diary” is a complex photographic material that is made from various layers of images and texts. Archive documents and photographs taken by the artist during her journeys in Latvia create a playful illusion of the past and the present.

Separately observed, completely specific today is fragmented in its manifestation of physical and mental migration. With her work Tamara Zibners invites to think about this.

Visitors were also invited to take part in the exhibition. There was a special box, where everyone could leave a photo from the family archive or share a story, heard or experienced, about moving away from Latvia and life outside homeland.

This project was chosen for a photo album (issued by Thames & Hudson) and for an exhibition “reGeneration 2: Tomorrow’s Photographers Today”, in Musée de l’Elysée, Lausanne, Switzerland, 2010. After that it has travelled to galleries in different cities of China, to Miami and New York in the USA, and other places. Exhibition at Kim? is the first time, when the series are shown fully.

The exhibition “Mimi’s Diary” was on view from August 13 to September 18.

Tamara Lynne Zibners (1982) was born in Sacramento, California. Her main field of interest is photography, but the artist also works with drawing, video art and music. Zibners has graduated from The University of California gaining a bachelor degree in arts. At present she studies in MA program in the University of New Mexico, Albuquerque. The artist has been participating in exhibitions since 2004. In 2007 she set up an exhibition “Portrait of Andrejsala” in Riga, Latvia.