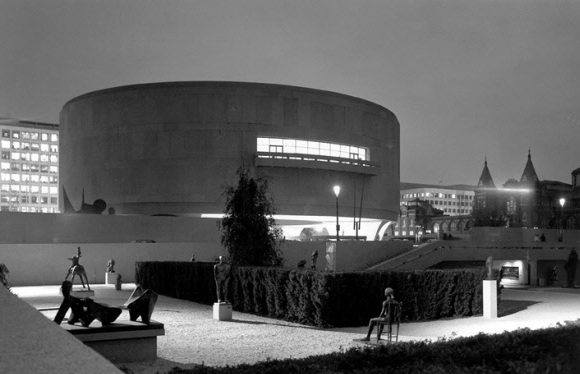 On Tuesday, 27 April at 19:00 artist and historian Terence Gower (1965) gave an illustrated talk on Joseph Hirshhorn’s projects for the Washington museum that bears his name and for the construction of a town to be called “Hirshhorn, Ontario” in Canada. The lecture is supported by the Embassy of the US in Latvia and it is part of the US culture month “Made in the USA” programme.

Joseph Herman Hirshhorn (1899 – 1981) was an entrepreneur, financier and art collector. Born in Jelgava, Latvia, the twelfth of thirteen children, Hirshhorn emigrated to the United States with his widowed mother at the age of six. His fortune was built on the 1953 discovery of the largest cache of uranium in North America in western Ontario. When Hirshhorn began to make money, he began to buy art, both paintings and sculpture. His collection consisted of around 12000 artworks by many renowned artists of the the nineteenth and twentieth centuries such as Willem de Kooning, Raphael Soyer, Jackson Pollock, Larry Rivers, Louis le Brocquy, Thomas Eakins, Auguste Rodin, Pablo Picasso, Henri Matisse, Alberto Giacometti, Alexander Calder and Henry Moore. In 1966, Hirshhorn donated much of his collection to the United States government. The Smithsonian Institution established the Joseph H. Hirshhorn Museum and Sculpture Garden in Washington, D.C. to hold the collection. At Hirshhorn’s death in 1981, he willed the rest of his collection.

After discovering the cache of uranium in Ontario, he enlisted architect Philip Johnson to help plan and erect what he envisioned as a “city of culture” – Hirshhorn. It was to embrace the latest urban planning strategies of the day and be anchored by a ten-story tower that would house the administration of the mining interest. Joseph Hirshhorn also imagined his massive art collection as the centerpiece of a Utopian mining town. A mean streak of protectionism from the nearby communities saw to it that Hirshhorn was never built. Though the city in the wilderness was not to be, a correspondence with President and Ladybird Johnson encouraged Hirshhorn to bring his collection of modern art to Washington DC.