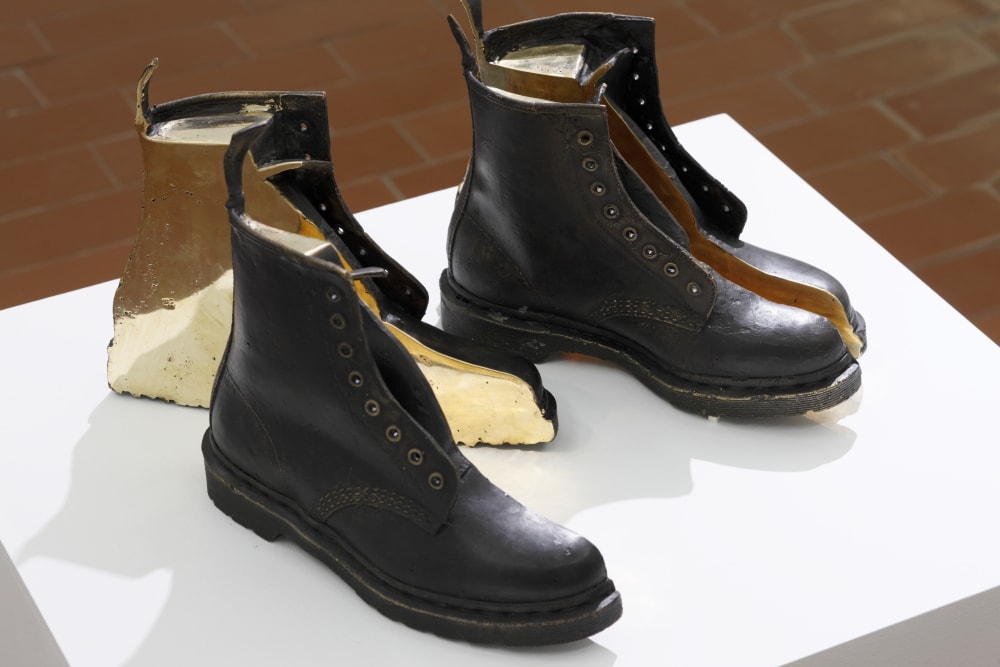 In an essay on self-portraiture T.J. Clark once wrote: “Looking too hard at oneself is embarrassing. Even self-consciousness is an equivocal concept (more so in English than French): some contexts make it a high and difficult attainment, and others an unfortunate condition linked with adolescence and bad skin.” It is within this contradiction and slippery ground that Tobias Kaspar in this exhibition has produced a new set-up to continue his ongoing investigation of the genres of portraiture and self-portraiture. The exhibition follows Kaspar’s main guidelines as presented in the work Bodies in the Backdrop (2012), Friends, Lovers & Financiers (2014), Two Cities – Two Lives (2015), The Street (2016) and New Address, a publication, published earlier this year,which marked the artists move to Riga. Based on a longer series of artist talks titled Roommate Education, the publication picks up the genre of the “making of”. Best known from feature movies; the second, the side product, the “making of”, a tool to market “experience”, which suggests that the process of making the film provides more insight and necessary information about the film itself. These are also called the “resulting products”, a never ending game of a product of a product of a product.

The portrait Kaspar generates for this exhibition is a set-up dedicated to Leo Tolstoy’s Anna Karenina. Following a long history of women characters being used by male writers to make a point in regard to social political conditions, Anna Kareninais a prop set in the foreground meantto underline the background. The character that Tolstoy draws, and the conditions and circumstances that, today could be witnessed ina tragic Telenovela play, are carried out within the figure of Karenina. Gertrude Stein’s “word-portraits” were written by arranging unrelated words in an insistent, repetitive style intended to capture the psychological essence of her subjects rather than any physiognomically visible “truths”. During the late 1910s and early 1920s, artists in the United States and Europe sought to create visual equivalents of Stein’s literary explorations. These “object portraits” exclude all figurative and retinal images of the sitter. By borrowing from advertisements, media images, and mail-order catalogues, Picabia created “mechanical” portraits in which he represented his friends and others by usingparts of machinery. For Proust or Bergson, portraiture involved an exploration of the “sitter’s” motives and circumstances. A central element of this exhibition poses a text-photo work Anna K. with close-ups from tennis courts in Riga and Rome and selected sentences from Tolstoy’s novel on themes such as farming, domestic life, currency and the socio-political setting of the novel’s main plot. The photographs are accompanied by an installation made out of objects selected in regard to their attributed symbolic value of class and lifestyle. Many of the appropriated objects’ – in the exhibition cast in porcelain or bronze – original producers from Latvia and elsewhere are listed as the exhibition’s corporate sponsors. This portrait is a messy one, a complex mix of ambiguities and contradictions, of containment, detachment, distance, sang-froid and self-possession. The opening at Kim?coincides with the time the ballet “Anna Karenina” is being staged at the Latvian National Opera and Ballet, which celebrates the 10th anniversary of being in the Opera’s repertoire. By the thematic choice of Anna Karenina, Kaspar is creating a site-specific installation with closeness and pointing out to another cultural event, another genre surrounded by artistic tension and apparent dependency.