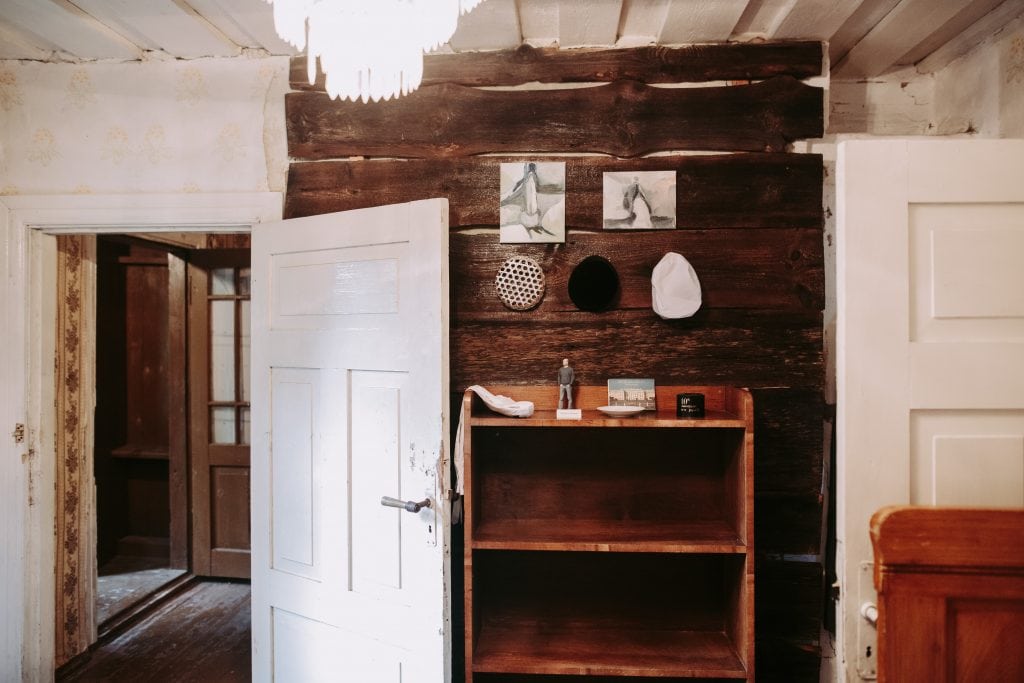 What if an art collector—or in more modest terms, a person interested in art who from time to time also happened to purchase, exchange, and receive art works as gifts—spent summers in rural Latvia? What would that house—let’s play it grand—that Estate look like? Of what would it be reminiscent of? Would the house pay homage to the shabby chic of Anna Karenina, or the Eurodesign that dominated 1990s interiors? Would it lean towards the Soviet-esque, or stick with a pre-revolution, Baltic-German style?

THE ESTATE’s SUMMER takes place in an abandoned Latvian summerhouse and imagines a fictional art collector who (could have) lived in a remote place such as this. Different artworks, ephemera, and leftovers from artistic productions join everyday utensils in creating a portrait that engages the entire house. Looking at the displayed artworks, it becomes clear that the collection or taste of this Collector is far from blue chip, where “signature style” and “key works” prevail. It is instead inclusive of many by-products and leftovers. Smaller, earlier works provide an image of a rather eclectic but engaged collection, in which the artworks form part of what could be described as a “conversation piece”, to quote the eponymous 18th-Century English portraiture style and Luchino Visconti film (1974).

THE ESTATE’s SUMMER opens on August 3 and remains open by appointment throughout September.
For inquiries please call at least two days in advance +371 29147500.

For its second chapter AUTUMN, THE ESTATE travels to the exhibition space of Kim? Contemporary Art Centre in Riga. Unlike the leisurely summerhouse gathering with its grand inaugural dinner, champagne and cigarettes; where conversation and gossip thrived amongst the intimacy of the endless nights, THE ESTATE at Kim? paints a darker picture, the one focused instead on the politics of the guest list. Like any collection (be it a collection of artworks, objects or a grouping of people) AUTUMN is based on exclusion. Nothing can be included without the exclusion of something else. Deaccessioning.

The exhibition space will be lacquered in black paint, celebrating the black box theatre and encouraging a movement of the exhibition visitors onto the stage. Pieces of art and furniture from the summerhouse itself will then be placed within the exhibition space. The rest of the scenery exists merely as a white painted outline, a floor plan of sorts. The ground is scattered with labels, for example, the outlined gooseberry bush is accompanied by the words “Gooseberry Bushes”, in evocation of Lars von Trier’s Dogville (2003).