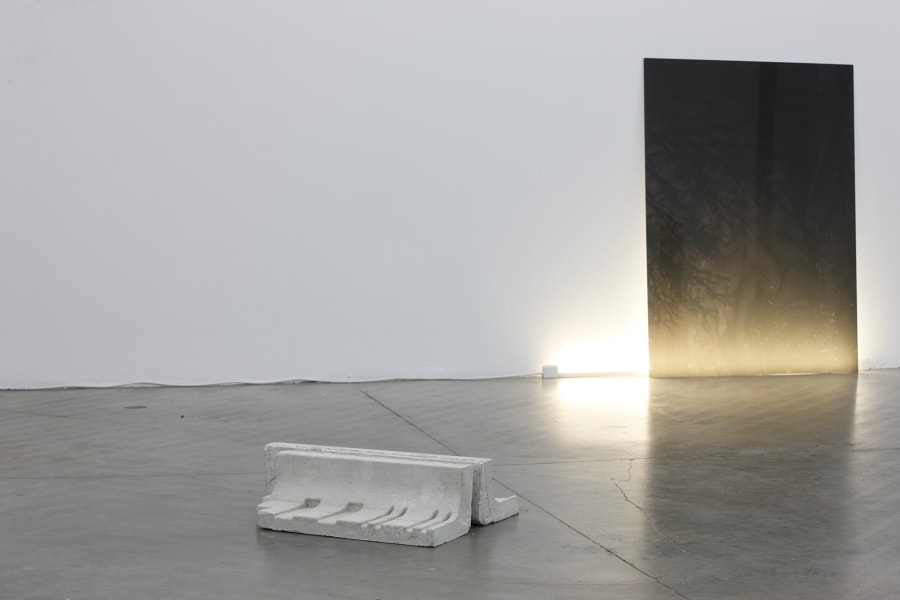 The start of the exhibition is a self-constituted inference that until quite recently, in the 20th Century, our thoughts and ideas aroused and stayed in a particular place – mostly at home, near the radio or TV. Today we no longer talk about it or rather we talk differently – with devices in our pockets, meeting somewhere in-between, mostly on the street. Progress is the result of excess, quoting Paul Virilio, “we no longer fight it.”2

Armands Zelchs was occupied with plaster casting for many weeks and often returned home rather late. Perhaps while staring at some screen, he began wondering about the fact that a lot more creativity is applied to product advertising compared to the actual costs of production. Let’s assume that galaxies and the Universe are popular attributes to the things that no one actually gets. Moreover, it’s not only on Space but also on products that carry its name. In this way, the sense of the new, the other space, in combination with the ever smaller-bigger, thinner and lighter, signals about the object that is disappearing. But let’s pause a while, the situation is interesting: as some half-thing or by-thing, it has lost the link to the subject matter, the function or support (form) it was made for, and now becomes a combination of simple planes, curves and spheres. One could even say that one of the space limitations has been lost. The starting combinations created for a specific purpose, after the execution of the task remain relatively abstract formations: free, confused, and thereof eligible for further variations. Form, liberated from the thing, is no longer recognizable, but the imprint of the thing once having existed, is inevitably present. This disappearing object like some fossil or scrap leads us back to the conceptual meaning of art, to the artworks themselves performing some activity. We are faced here with neon lights, plaster objects, some photos, and looking at this set we feel that some vague, but real desires are satisfied. The whole exhibition is a metaphor – a metaphor for art and consciousness which makes the artist be more like an image that is hoisted, hoisted on for the delight of the public. An exhibition was joined by its new title recently and yet just like life, which is not necessarily personal, it does not have any decisive meaning.

Armands Zelchs (1978) has graduated from the Art Academy of Latvia, Department of Visual Communication and studied at the Berlin University of the Arts (UdK), Fine Arts Department. The artist works mainly with objects and his interest concerns the boundaries of human perception and its abilities. Zelchs has participated in contemporary art exhibitions in Latvia and Europe since 2007. Group exhibitions include 24 Spaces – A Cacophony at Malmö Konsthall (Malmö), gallery Stiftung akku Emmen, (Switzerland), Städtische Galerie Bremen (Germany), Moscow Museum of Modern Art (Russia). Previous solo exhibitions: Escape Attempt, Kim? (2009) and That which not which is. The name of that is known, (2011) Kim? Contemporary Art Centre.