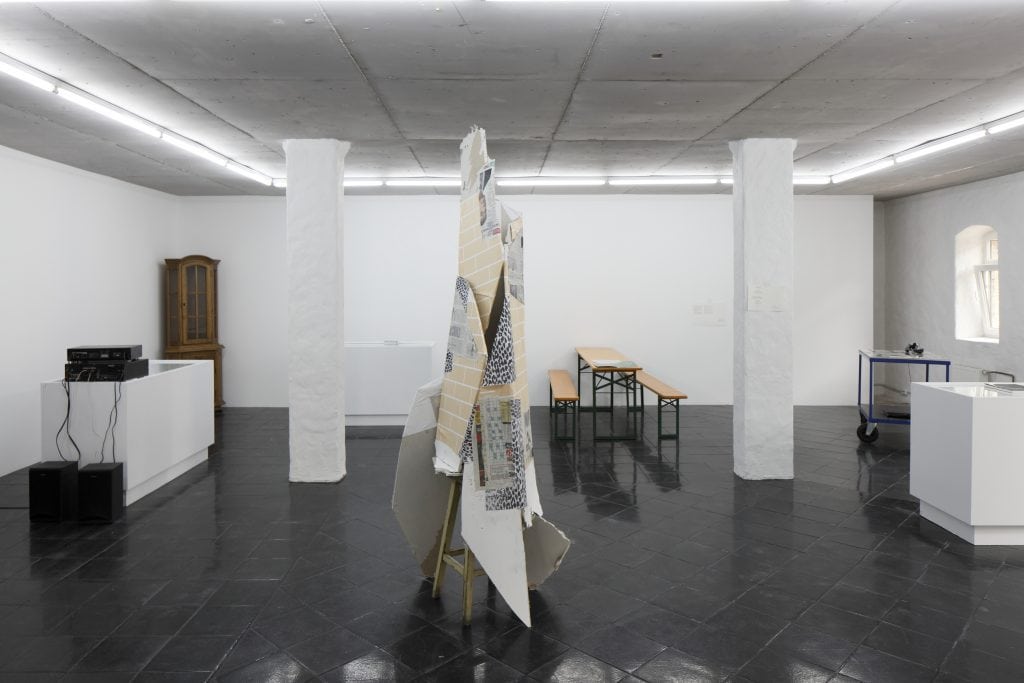 There are always at least two ways for an artwork to be perceived in the public arena: the work itself can be seen or elements of its support structure appear: title, name of the exhibition, press releases, reviews, in addition to the public image of the work, gossip around it, etc. This exhibition presents examples of artworks where the support structure is not presented in a standard form but is questioned and criticized so as to illustrate the preestablished discursive structures and institutional conventions in which the work has been produced. A parallel approach independent of the work is developed – the analysis functions according to its own logic and references, not only do different artworks reference each other but their support structures also correlate, thus creating what is called a discursive field.

In an essay published in 2008 in the German magazine Star Ship, the artists Jay Chung and Q Takeki Maeda provided an explanation to their exhibition held in 2006 at the Isabella Bortolozzi Gallery in Berlin and the press release that went along with it. The text ends with the following paragraph:

“One last thing about the use of references in artworks – I think that the reason why the press release has become a center of attention goes beyond the fact that it establishes credibility, but that a work’s significance relies less and less on concrete images or indexes found in work itself, and more on a declarative statement by the artist, curator, gallery or whatever institutional support the work has. By telling the viewer what something is, an otherwise hermetic exhibition space is connected to the rest of the world. I find that, as opposed to these types of statements, non-predicative statements are much more interesting. As an analogy, you could say that the impact of an insult doesn’t depend on its reference to the world. If someone says, “You are an asshole,” you are not insulted because of the statement’s literal meaning. Insults are interesting because name-calling does not rely on language’s consistency with the world to which it refers; the impact of the insult has not to do with reference, but with the experience of language itself.”

This exhibition brings together works by artists and writers, with texts that are either part of the works or function as supplementary material – reviews, notes, etc. By means of these texts, the exhibition seeks to track down and perhaps ultimately artificially illustrate some traces of the discursive fields to which the exhibited works belong, which they themselves have established and in which they operate in.

“FR OM TH EA TO TH EK” by Ei Arakawa and Nikolas Gambaroff, feauturing Karl Holmqvist
“Natural’s Not In It” and “Untitled Making Room in Two Acts. Act one: Sequel, Act Two: Debut” by Gerry Bibby
“when buffeted (Toter winkel)”, Hans Ulrich Obrist Interviews Vol.1 and three texts by Jay Chung and Q Takeki Maeda
The Complete Poem and the magazine Made in USA by Bernadette Corporation
Films (1982-1992) and texts by Chris Kraus
Excerpts from “Crystal Flowers” LP: the poems of Florine Stettheimer sung, spoken, and refracted by various artists, a compilation by Nick Mauss.
As well as excerpts from the contemporary art magazine MAY

This project has been assisted by the Australian Government through the Australia Council for the Arts, its arts funding and advisory body.