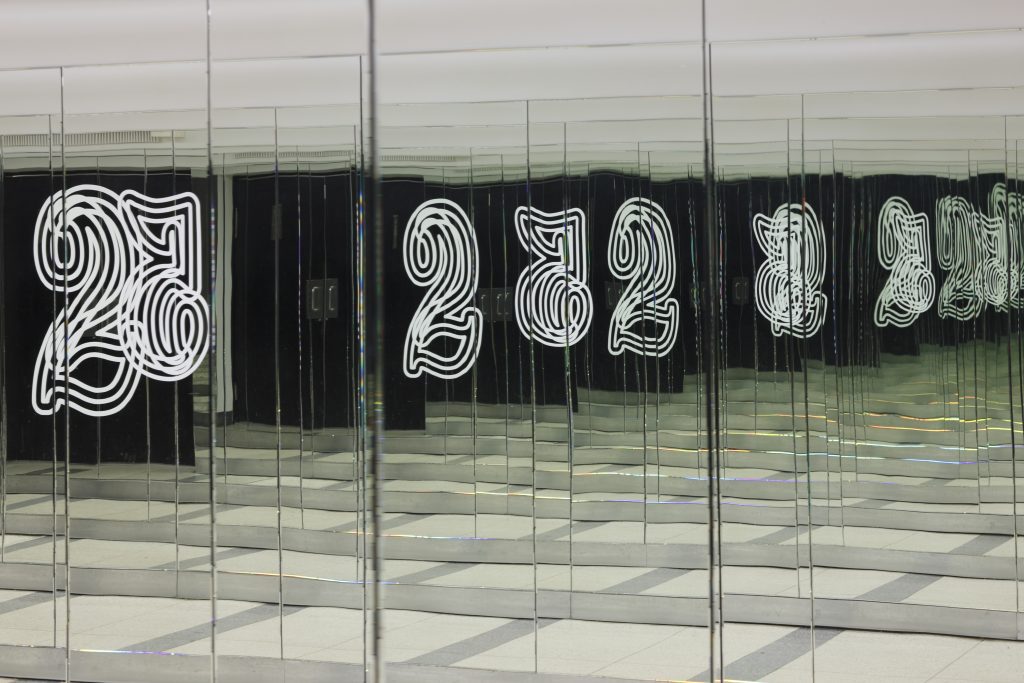 The exhibition organized by kim? Contemporary Art Center and Contemporary Art Centre (CAC), Vilnius in collaboration with Dailes Theater reiterates the XII Baltic Triennial* as it opened in Vilnius on September 4, 2015, in a setting which despite some major divergences resembles its original venue. Just like the CAC in Vilnius, Dailes Theatre was built around the 1970s in the centre of a then-Soviet Baltic capital with the purpose of staging public presentations of new art. And just like the CAC, it more or less serves its original use to this day, despite them both having hosted other extra-curriculum events including car shows in the past. The Baltic Triennial in one and the other will also be somewhat the same**.

The Baltic Triennial was established in 1979 as a periodic exhibition of young Lithuanian and later Baltic artists expressing non-conformist spirit. With its twelve consecutive stagings, it has grown to become one of the major contemporary festival exhibitions in Northern Europe. Mainly showing emerging art the Baltic Triennial now offers a wide range of activities and artists from the Baltics and beyond.

*WHAT IS AN ARTWORK TODAY CAN BE SOMETHING ELSE ENTIRELY TOMORROW – this sentence, picked out from an interview with the artist David Bernstein, is at the very heart of the forthcoming Baltic Triennial. The idea is not new: how we perceive an artwork and what we expect of it changes in time. Things get forgotten, switched around and we end up looking at the wrong end of a musical instrument or playing a painting back to front. Sometimes, however, that’s on purpose: a composition decomposes, a song becomes a mood, a sculpture – a model, and a drawing – a letter. Are we then to talk about uses of art or rather about the art of uses? Or better skip art at all? Well, let’s find out.

This year’s Triennial will focus on the Baltic more than the previous editions, on the geographical region, its culture and the sea. It is a decidedly transdisciplinary event that, in its own motto of sorts (“what is an artwork today…”) is mainly interested in the “something else”. The exhibition opens up a range of topics and their couplings including influence, exchange, materiality, and impact. It’s primarily an exhibition at the CAC, but the programme of events – talks, launches, presentations, classes and performances – spanning six weeks will expand behind the scenes.

**“How to Clone a Mammoth: The Science of De-Extinction” is a book by Beth Shapiro. There she explains that cloning a mammoth is almost impossible as scientists can’t find a living mammoth cell as cold weather, light, bacteria damages the genome sequence in the cell thus it is impossible to read a full undamaged sequence of genome.

Thus the idea is not to clone a mammoth but to edit the genome sequence of an elephant cell in a dish in a lab, using new genome editing technology, and swapping out bits of elephant sequence for the mammoth version of sequences making a mammoth look and act more like a mammoth than like an elephant. The ultimate goal is re-establishing lost productivity of the tundra ecosystem. Except that this is not cloning and it’s not exactly re-establishing. “Mammoths and elephants have approximately 99 percent identical genomes. If we are talking about changing a few genes here and there to make them better adapted to living in the cold, I think we are talking about preserving elephants,”

—from Valentinas Klimašauskas’ How to Clone a Mammoth (in Three Voices and with a Fisherman’s Exaggeration) or The Science of De-Extinction in the Economy of Clicks, to be read during the exhibition opening on May 7, just like in Vilnius few months earlier.