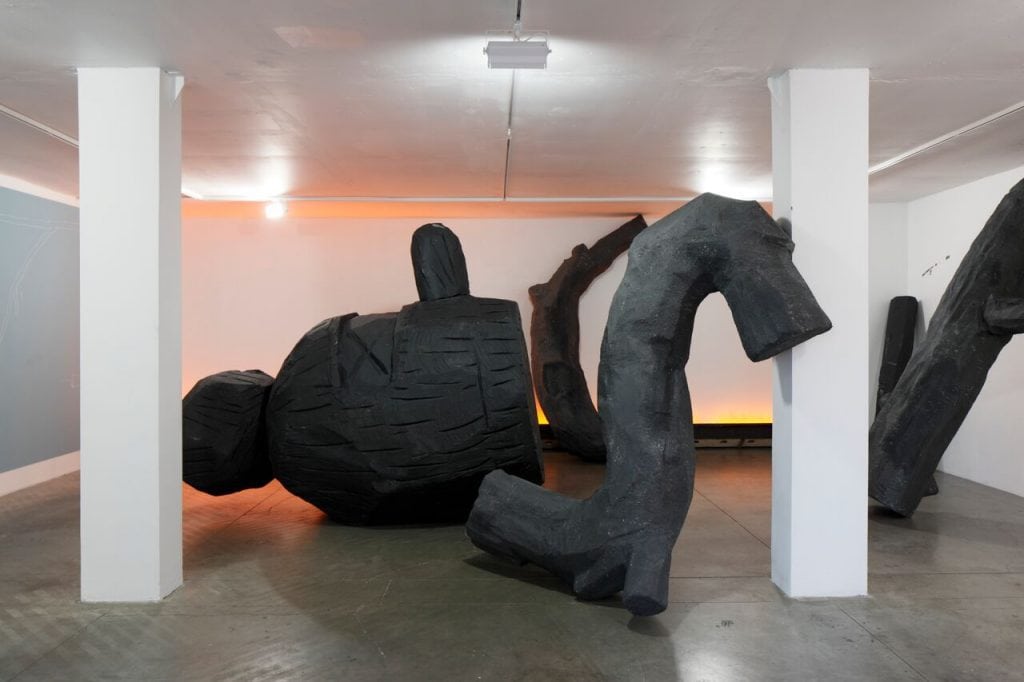 From November 4 to December 11 at Kim?/VKN Gallery an exhibition of Lithuanian artist Žilvinas Landzbergas “For Ever Again” was on view.

Currently working in Lithuania, inspired by new Swiss plastic arts, and coined his fame in Netherlands, Landzbergas is not an artist easy to locate within the grid lines of art geography. However, the overview of his works shows some stable patterns, in a way providing the genealogy of meaning also for the current exhibition at Kim?.

“For Ever Again” is an exhibition-object, sculptural installation in a series which was established by exhibition “The Future is Now” in Viena 2011, but it contains some elements from his earlier shows as well. Such continuity and partial similarity of the objects exhibited is rooted in the artist’s conceptual agenda and the particular form of the creative work. None of the objects displayed here is an artefact per se – those are free standing, self-contained pieces of art. An exhibition-object is constituted by the interplay of three elements: objects exhibited, the composition of exhibition, i.e. relationships between the objects, and the gallery space. The latter is an active variable in Landzbergas’ works: every new exhibition by the particularity of space shapes also the choice of objects exhibited and the manner of display. Figuratively speaking, roughly and heavily material, Landzbergas’ objects thus still resist the commoditization of art. Acquiring their meaning in particular spaces, they cannot be sold outside the original context; thus, an exhibition-object acquires some properties of much more “transient” art forms like performance or non-material objects/ relationships.

At the same time, repeatedly exhibited objects together with the purpose-made artefacts for particular exhibitions more or less intuitively draw their meaning from the author’s personal mythology, the latter being accumulated during the creative process, as well as imagined, planned and realized exhibitions. However, this dimension of meaning is neither directly accessible, nor mandatory for the visitors of an exhibition-object; it is not located in dominant position regarding other possible interpretations. Such postmodern relativity is also in a way based in a part of the artistic process the final result of which is an exhibition-object. Landzbergas is quite a visual artist. On the one hand, each particular exhibition is conceptualized, imagined, visualized many times before creating objects and displaying them, but for the spectator the exhibition-object is a spatial reality, experienced while walking inside it, choosing and changing the subjective perspective of the sight. On the other hand, his works often demonstrate some kind of optical illusions, visual eye-catchers, strange details, some of which only afterwards might manifest as a disturbing feeling of something-was-not-right-there. Painted half-transparent curtain, a doted light box, or lifelike cardboard model of some industrially produced thing serve as a stimulus to stop and watch more carefully, to contemplate upon the status of reality seen.

Although sometimes interpreted as such, Landzbergas’ works are not intended as a social criticism or nostalgic representations. Instead of articulating some kind of intended message, their grammar resembles narrative knowledge in the way the later has been juxtaposed to modern/ scientific knowledge by Lyotard. They are legends and folktale motifs which come from the author’s personal mythology. Like storyteller tells the same fairytale each time a little bit differently (but it is still the same tale), Landzbergas varies his exhibition-objects, always leaving them open for diverse interpretations and further permutations. Their meaning is a vanishing experience of ephemeral time, determined by memories and expectations, particular spaces and subjects; and the understanding of linear time is an ultimate backdrop of our culture, questioned in “For Ever Again” sculptural installations.1

For ever again: Myths shape our reality while we are creating Myths
Artist’s comment

In a way this work is a minor chord dedicated to our present existence where Time is simply turned into figures announcing each moment to be present and constantly going to a zero perspective.

Lots of last century theories, adopted to create a life style, showed its limitations, or even worse, turned often into disaster forms. The fast development into the Future promise, rather creating unsolved social problems instead of solutions. Many thinkers and artists tried to guess what shape our futuristic ideas in the end would take. Paradoxically, today we somehow have already entered this, so called, future moment. I believe many forms in a contemporary vernacular culture describe very clearly the diagnosis of our reality today, much earlier before we have understood it. Children’s toy production could be a perfect example showing the hierarchy of contemporary Mythology mirroring today’s main values in the society and pointing out its vision.

With this work I am inviting to enter the world constructed out of no longer things but their symbols or prop forms instead. Flame, sky, grass or water elements without their physical experiences but as images appear referring to our subconsciousness turned into a space without exact time moment and space perception. It’s a suggestion to take viewer to wonder into this world of imaginary future fiction.

Žilvinas Landzbergas (1979) currently lives and works in Vilnius. In 2004 he graduated from the Department of Sculpture at Vilnius Academy of Art. Together with Lithuanian artists Mindaugas Lukošaitis and Rokas Petruškevičius, Landzbergas has taken part in artists’ group Blizge. From 2005 to 2007 he spent two years working in the artists’ residency De Ateliers, Amsterdam. In 2008 Landzbergas was awarded the prize of the modern and contemporary art publisher Thieme Art, the Netherlands. Since 2003, Landzbergas has participated in various international exhibitions. His works have been exhibited in “Modern Art Oxford” gallery (2005) and represented in the “Frieze Art Fair” (2009), UK.

1 Insights are based on personal conversation of culture theoretician Toms Ķencis with Žilvinas Landzbergas in Vilnius, October 12, 2011.