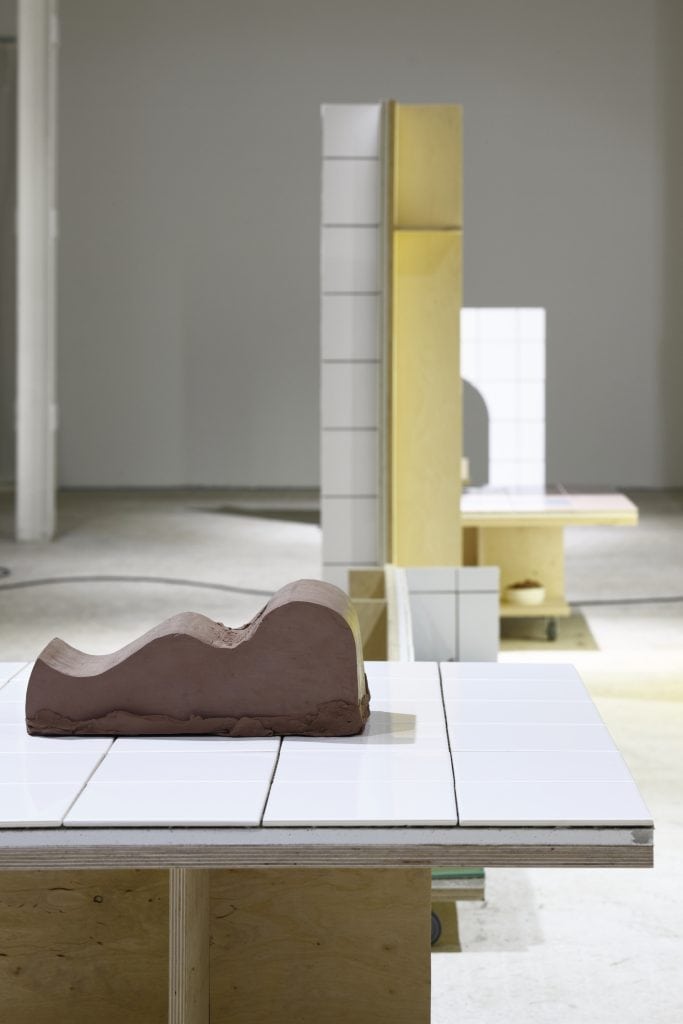 Images 1 of 7
Armands Zelčs “When You Read This , Nothing Special Will Have Happened”

For this year’s final exhibition cycle Kim? has prepared a solo show by Latvian artist Armands Zelčs that will be on view from December 6 – January 27.

We don’t know where exactly we are. Indications disappear in the noise of automobiles, the forms of buildings are like holes in cheese that remind us of one another, despite them being different. There are various public institution interiors which lead every visitor into an impossible labyrinth, however, no matter where you go, something as red as Chagall’s paintings is fluttering. Anyone who has arrived unprepared here be – comes an electricity blowout which sparkles in the eaves.

Under the asphalt are toes which nervously flick across the glass. Behind the glass is a little screw that is part of a mosaic from which hang occurrences that happen, but never end. Visitors arrive, get lost and leave, repeatedly, again and again each and every day. It is a performance without intermissions, because even visits to the loo have been measured, calculated and systematised. The play, the costumes and the gestures – unimportant shifts in the midst of the cigarette smoke by the service exit and Champagne bubbles above the main door. C’est fini, sooner or later we understand that those whose seats have remained empty have gained nothing and lost nothing. The Sun is still rising and falling. Above hats and bonnets is the ceiling which unforgivably hangs there in spite of a world record in the long jump or the shot put.

The desk drawers are full of photographs and the pockets are full of batteries. Skyscrapers are full of clouds. Clouds are full of flashes. Each click creates a suspicion that we are some where else and that sometime it will be interesting for someone. Each attempt to catch the Moon in one’s fingers is a false hope to leave behind an impression on the data highway. Each person who has sent greetings to the Sun in May is like an interdimensional traveler and a silent witness who is real and crumbled. And yet every cycle surprises us anew – our affection for moments is endless. Like lotto numbers, we stumble between chandeliers, decorations, pedestrian crossings, road signs and guidelines. We win and lose, but that is not of large importance, because we do not know where exactly we are.

Armands Zelčs (1978) is a Latvia-born artist. Zelčs studied at the Latvian Academy of Art and Berlin University of the Arts. Armands Zelčs’ exhibition “Trails of Fading Landscapes” was displayed at Hobusepea Gallery in Estonia and at Kim? Contemporary Art Center in Latvia. Zelčs has taken part in several group exhibitions – “NNN” at the Latvian National Museum of Art, “TERRA INCOGNITA. Familiar Infinity” at KUMU in Estonia, “Gaisma kabeļa galā” at the Latvian Railway History Museum, “LILIY’S POOL” at Art in General in the United States, “Exchange” at Stiftung akku Emmen in Switzerland, “24 SPACES–CACOPHONY” at Malmö Konsthall in Sweden and others.