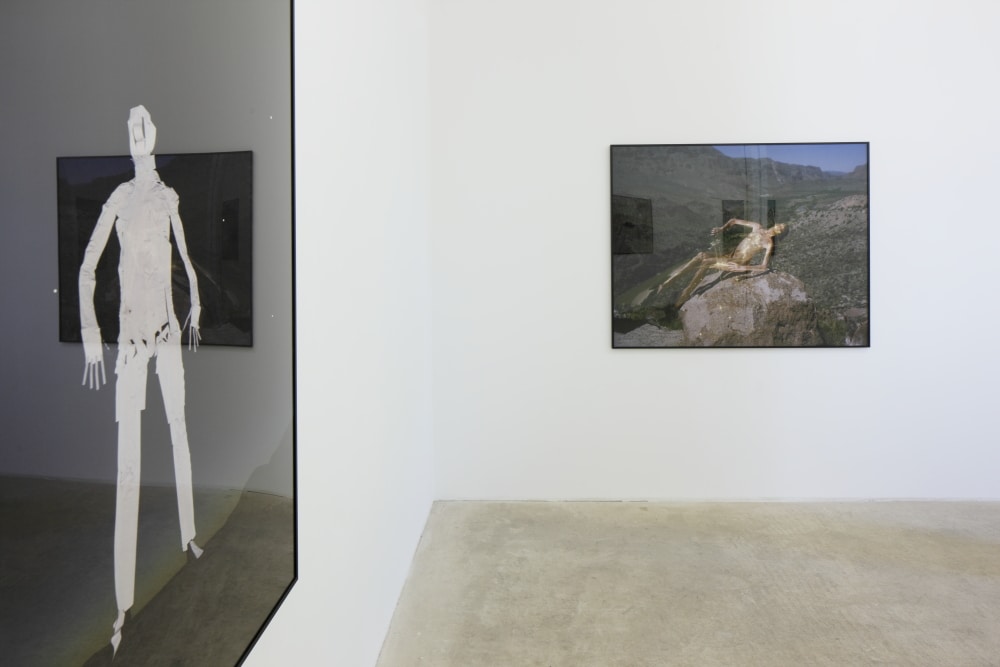 Images 1 of 7
Synchrodogs “Back to Nature”

Part of the Riga Photomonth 2017 Festival

Through volcanic islands and desert plains, wild waterfalls, geysers and ridges, Synchrodogs points the viewer to follow a curious story about the human relationship with nature. In the artist duo’s,Tania Shcheglova (b. 1990) and Roman Noven (b. 1985), created photographs you can decipher a feeling of a surreal, daydream like world in which the human image and its surrounding environment interact in different assembled settings.

A naked, gold plated female body sparkles on the verdant mountain scenery background, or is overgrown with bright fruit props; it has frozen on a coarse rock field. Tania’s body weaves through countless outlying terrains with an unusual, almost beastly posture, carefully selected attributes, costumes, body art painting and the help of lighting effects; the boundary between reality and illusion is removed, and the genre of a contemporary act is closer to being defined. Both artists refer to this as a journey of intuitive introspection in both a spiritual, and entirely physical aspect. On a quest for severe corners of nature untouched by man, the photographers have travelled all around their native Ukraine, they have also gone for a more than four thousand miles long road-trip through central America, though for the purpose of defining states of consciousness for two years they have also been practicing meditation and have systematically made notes on their drowsiness and deep sleep dreams. This could also be called an experiment on dreaming techniques and subconscious cognition, which was created with the intention to record the delicate and difficult to define transition from sleep to wakefulness, and subsequently visualizing it in photographs. The model’s body language, facial expressions and at times perceivable mesmerizing gaze exudes an aura of alienation, which leaves the invention of a possible narrative – to the viewer alone. Their conjured up (though carefully constructed) aesthetics are close to the genre of magical realism, the fantasy is enlivened to such an extent that rationality departs. Everything seems possible and there is nothing unusual. Despite the intrinsic surreal qualities of the works, and perfection and gloss typical of fashion photography, they are characterized by a sharp authenticity, as their main focus is on the fusion of human and nature’s nudity. Synchrodogs themselves refer to it as the most direct and primordial link between modern humans and the Earth. Ultimately, this could also be the story of a lost paradise, to which the 21st century Adam and Eve look to return to.

The exhibition Back to Nature comprises a retrospection of two of the latest photo projects Supernatural (2015) and Reverie Sleep (2013).

Synchrodogs is a tandem of Ukrainian photographers, which gained international acclaim in both the fashion and art worlds, allowing them to be called the major Internet sensation of recent years in contemporary photography. They create thrilling, surreal images, combining landscape with fictitious characters. These etudes are poised between the real and the imagined, taking the viewer into an unconscious, beastly, dreamlike realm. In the almost ten year collaboration the artists have had multiple international solo exhibitions, and their work has been published in both art and fashion magazines. They have issued two photo-books Synchrodogs (2011) and Byzantine (2013).  They have made campaigns for brands and media such as KENZO, Swarovski, Urban Outfitters, SHISEIDO, New York Magazine, Esquire, Harper’s Bazar, Dazed&Confused and others, as well as the singer Lady Gaga. They have done projects and exhibited since 2011 in art spaces like the White Gloss gallery in Los Angeles, Bern Kunsthalle in Switzerland, Palais de Tokyo in Paris, Pinchuk Art Foundation in Kiev, Dallas Contemporary in Texas among others. In 2016 they received the magazine Vogue Italy Best Fine Art Photographer award.