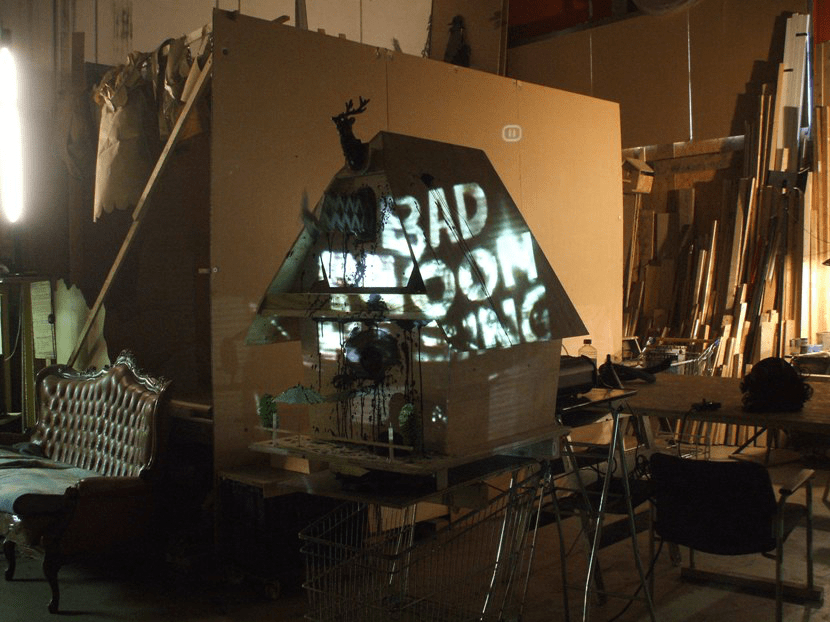 During Programme No. 13, 3 July until 1 August, 2010, exhibition “Cuckoo” by Dutch artist  Bas De Boer (1978) at the Kim? / VKN Gallery. The exhibition showcases large-scale installation “Cuckoo” that the artist has been working on during his residence in Riga. Heden, a contemporary art centre in The Hague, The Netherlands chose De Boer for the first Kim? / Heden residence for his vigorous approach to art, as well as for his indubitable creative potential.

Confronted with the idea of a residence, De Boer used the situation as the inspiration for a new work. The three months spent in Riga were used to build a giant cuckoo’s clock: a symbol of domesticity and regularity. Like a home away from home De Boer meticulously constructed the house-shaped clock that is just big enough for one person to sit in. Since the popularization of the clocks around 1850 they have become a common souvenir for people travelling through the mountains of the Black Forest and surrounding areas; thus “Cuckoo” serves as De Boer’s self-made souvenir for his stay in Latvia.

In addition to the references to the cuckoo clock, the work also refers to the cuckoo bird. Cuckoos are brood parasites, meaning they lay their eggs in other bird’s nests. And, much like the cuckoo’s breeding habits, an artist in residence ‘lays his egg’ in another country’s nest. With “Cuckoo” De Boer comments on the parasitic behaviour of an artist during a residency, as well as the way different parties profit from the exchange of artists and their cultural and intellectual resources. Before laying her eggs, the cuckoo pushes out the other bird’s eggs. The cuckoo therefore also symbolically relates to the contrast between the country the artist originates from and the location of the residency: while The Netherlands is a country with a rich cultural climate and almost endless possibilities for artists, Latvia has not yet had the time to build up a similar climate and therefore the possibilities for contemporary artists are few. As an artist who is well aware of this discrepancy, De Boer rather feels like a cuckoo that pushes out the eggs from another bird’s nest in order to lay his own.

After the exhibition at Kim?, “Cuckoo” will face the same destiny as all De Boer’s works: it will be disassembled and its components will be re-used in subsequent works. But not before he has filmed the work and compiled it in an endless video collage “Compilation Video”, that Kim? visitors had an opportunity to watch at the Museum Night.

Bas de Boer has graduated from the Royal Academy of Art, The Hague (Koninklijke Academie van Beeldende Kunsten). He has been participating in exhibitions since 2002 and his paintings, installations, and videos have been exhibited in the Netherlands, Germany, Serbia and Spain.