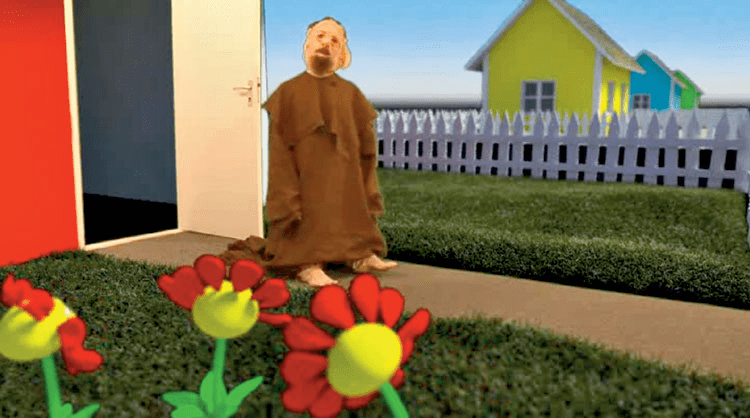 On 9 July at 19:00 everybody was invited to attend a programme featuring two Latvian films that need no comments – “Dr. Enesers’ Binokulāro Binocular Dance Courses” by NSRD (1986) and “Fame Simulator” by Kristaps Epners (2005). And two foreign films – “The Total Cycle Of  Psychoanalysis In Seven Minutes” by Lotte Konow Lund (Norway / 1998) and “Vantaa” by Erkka Nissinen (the Netherlands, Finland / 2008).

“The Total Cycle Of  Psychoanalysis In Seven Minutes” refers to the seven-year process of Freudian analysis. The person in this video literally takes the process in her own hands, and goes through the stages of self-denial before moving swiftly through self-acknowledgement and ending up with self-love. All in total self-denial.

However, Nissinen’s inventive and idiosyncratic new video work “Vantaa” provides us a glimpse of a world in which a trio of overweight chefs, a transvestite and an animated panda bear act out disjointed narratives of perverse social interaction. The relentlessly satirical investigation of social behavior, deviation and transgression is expressed as the intersection between the absurd and the humorous.