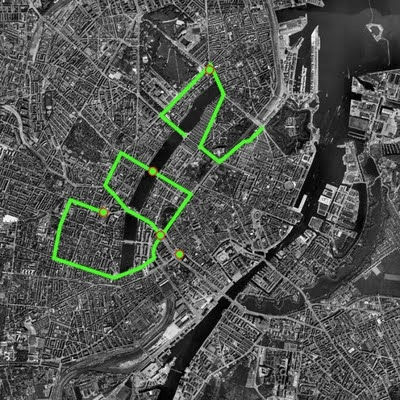 On 14 November at 16:00 everyone was invited to attende a lecture by Danish artist Jacob Fuglsang Mikkelsen (1972). Mikkelsen told about the idea behind “CO2 E-Race“ and the realization of the project.

After the lecture at 17:00, Mikkelsen started creating the CO2 map in Riga. He drove in his environmentally friendly car in Riga for about one and a half hours and the route of his journey was marked on the map of Riga projected on the wall of Kim?. At the end of his journey, the projected rout formed the chemical formula of carbon dioxide – CO2. Mikkelsen’s car was parked near Kim? before and after the CO2 drive.

Jacob Fuglsang Mikkelsen was born in Denmark, grew up in Sweden and after high school moved to the USA where after finishing art school he worked as an artist, photographer, DJ, gallery director and event coordinator at various cultural institutions in the city. In collaboration with The Danish Cultural Institute, Jacob has worked on creating a relationship between Copenhagen, New York and Istanbul. This not only to create a network and exchange activity between Copenhagen and Istanbul in connection to the plans to establish an Institute in Istanbul, but also as a integration project between Turks and Danes. While working on the Triangle Project, Jacob was asked by the General Secretary of the Danish Cultural Institute, Finn Andersen, to come up with a Climate Project. The CO2 E – Race Project is a natural progression of Jacob’s earlier work, to create awareness and information about issues in society with the tools of art and culture.

The CO2 E – Race is a project designed to increase public awareness of global climate changes using the vehicle of CO2 friendly cars as a way to spread the message.

The lecture was organized by the Danish Cultural Institute and Kim?