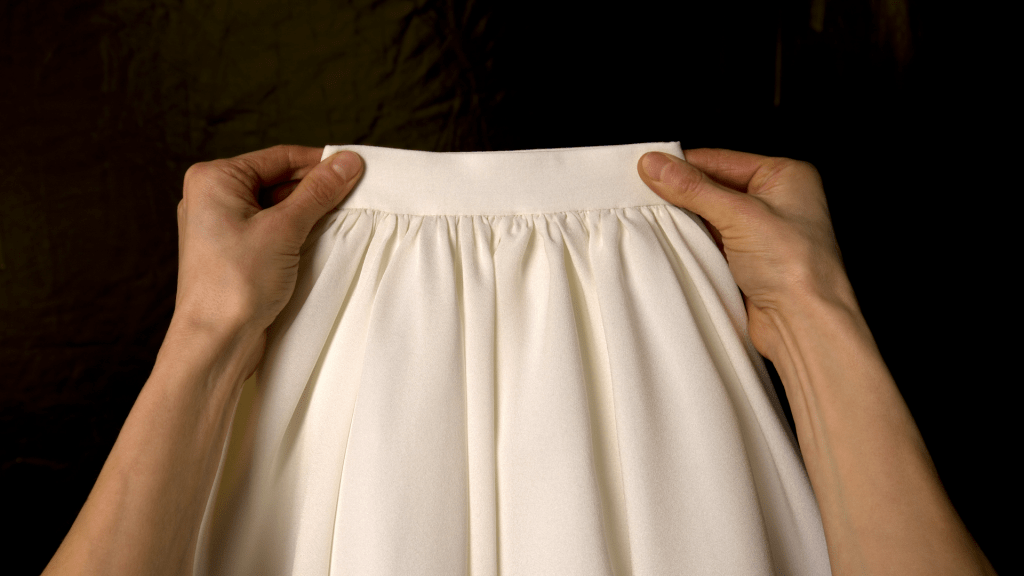 During Programme No. 9, 20 March till 11 April, 2010, exhibition “Room of Treasures” by Latvian artist Dace Džeriņa at the Kim? / VKN Gallery. The works showcased in the exhibition – videos “The Land of Happiness” and “Enticement” and object “On Your Own” – create an open space where searching, creative process, personal feelings, values and ideals are of importance.

Video “The Land of Happiness” (2008, the collection of the Latvian Museum of Contemporary Art) is about the searching of one’s home. It begins with finding the place. This is followed by reclamation of the space – dusting and besoming the waste of previous owners, introducing one’s own order and belongings. And then the place becomes your home until you pack your things and leave it for a new one.  The land of happiness is the place we look for until we find/don’t find it or maybe we create it ourselves.

Video “Enticement” (2010) invites the viewer to enjoy the beauty of an ordinary piece of textile. The video is structured as a book – layers of textile  are leafed through like pages. As soon as the viewer opens the first page, he/she finds himself/herself in a wonderful world, where one can explore, enjoy and marvel. Touch and vision creates images in one’s fantasy.  Images come into existence and begin a life of their own. One beauty becomes a material for another.

Object “On Your Own” (2010) is an attempt to reflect on the never-ceasing thought process. The mechanical movement of the image of the transparent rocking-chair “put” in the frame of the object creates an illusion of rocking. Those are the ideal circumstances for not doing anything, for resting, for being on your own, for thinking things through.

The title of the exhibition is borrowed from the essay by philosopher Walter Benjamin, which speaks about things in a room and their value. „..And the secret of their value is simplicity – the modesty of living space where the space they occupy now, as well as the space which they are invited to occupy is visible.”

Artist and stage designer Dace Džeriņa has participated in exhibitions since 1998 and has taken part in group exhibitions both in Latvia and abroad: Italy (“La Riga”, 2003), Lithuania (“2 SHOW”, 2003), the Netherlands (“Art Primeur 2001”, 2001), Germany (“Riga Line Up”, 2004, “Time Will Show”, 2008) and others. Džeriņa has worked as a stage designer since 2000 (“Benjamiņa. How Modern Man Ought to Live”, “Raggedy Ann”, “The Blue Bird”, “Hotel Kristina”, “Molly Sweeney”, “Possible Worlds”, “Top Girls” and others). In 2002, Džeriņa received the Artists Union of Latvia Award for creative innovation in exhibition “The Creative Evening; Old Monkey – 100”” (together with artists Anta Pence and Dita Pence). In the Experimental and Alternative Film Festival in 1998, the artist received award Kristapa tapa for her video “Face to Face With an Enemy”.