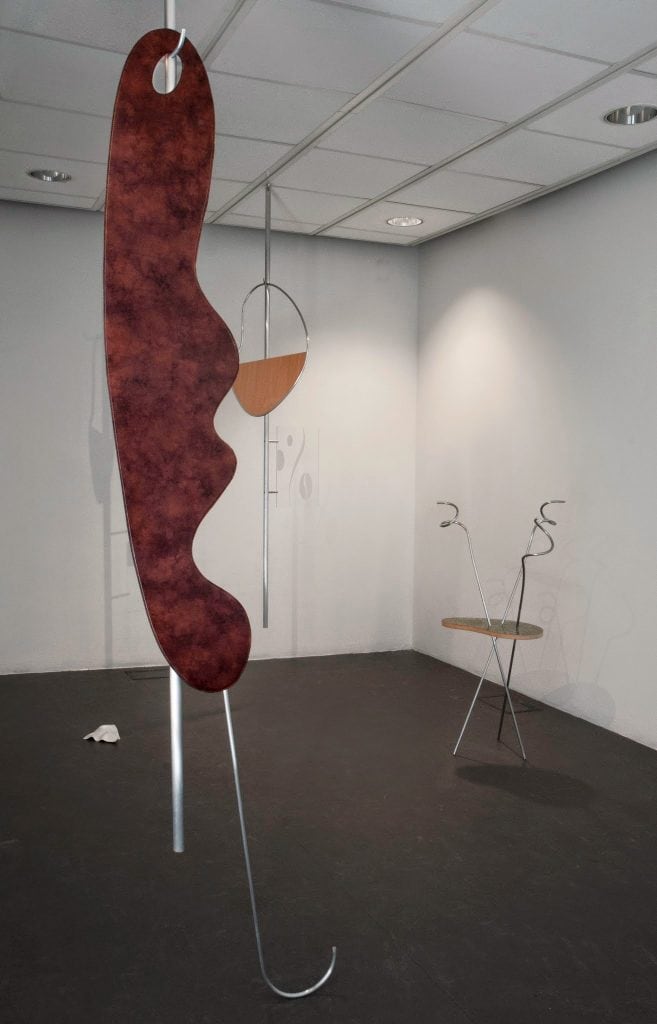 Drawing inspirations from the contemporary interior aesthetics of offices and coffeehouse chains (fig.1) that are characterized by an ever present cheapness and impersonality (fig.2), the artist Daria Melnikova merges the glimmer of colors (fig.3) and their shapes with an atmospheric lightness (fig.4), creating an oasis for escapism in the present conditions of a constant consumerist culture. And even though we realize this “comfort zone” is double faced (it absorbs into its flat surface, while wittily guessing one’s needs) – it’s more than fine for as long as we appreciate being surrounded by the thing that blinks cheekily, while seemingly giving us all we need. An exhibition as a harmony in-progress, a kind of a litmus paper (fig.5) showing and showcasing various appearances of materiality and aesthetics unravel as follows:

fig.1. Places where people are united by common intentions and desires. They are dependent on the clichés and judgments of an average about what is to be considered beautiful. Joint in a chain and wrapped around a spherical surface. A set of standards, samples, philistinism;

fig.2. A catalogue of materials. The materials used carry a great supply of associations. A bright spectrum of imitations – from various wood to sunlight and leather reproductions – is characteristic. A specific, artificial setting created to cause a certain mood. In self-promotion materials, often regarded as the oasis of peace, an escape from the ordinary, further on.;

fig.4. The atmosphere – something between an office and home;

fig.5. A hanger as an element the appearance and shape of which is constantly changing regarding the circumstances. An arrangement of the elements of materiality and aesthetics.

Daria Melnikova (1984) has graduated from the Art Academy of Latvia, Department of Visual Communication. Participates in exhibitions since 2005, amongst them Noma 00-10 (Riga, 2009), What’s Up, Sea? at 10th Rauma Biennale Balticum (Rauma, 2010), 24 Spaces – Cacophony at Malmö Konsthall (Malmö, 2013), You Only Live Thrice (Malmö, 2013), Sculpture Is Space at Hobusepea (Tallinn, 2013). Her first solo-exhibition Dashing Lines and Forming Heaps was on view at Kim? in 2011. This year she participated in Literacy-Illiteracy at 16th Tallinn Print Triennial Kumu (Tallinn, 2014). Recent solo exhibition – A Green Silhouette of Grey was on view at Kim? during February/March, 2014.

Brewing Harmony was the third and last exhibition in the series Hanging Above. The Case in the Cafe. The cycle of solo exhibitions in three episodes by Evita Vasiljeva, Ieva Kraule and Daria Melnikova responds to an invitation by gallery Vita Kuben for two European Capitals of Culture 2014 – Riga and Umeå.

Curators would like to thank: Jānis Borgs for his support.