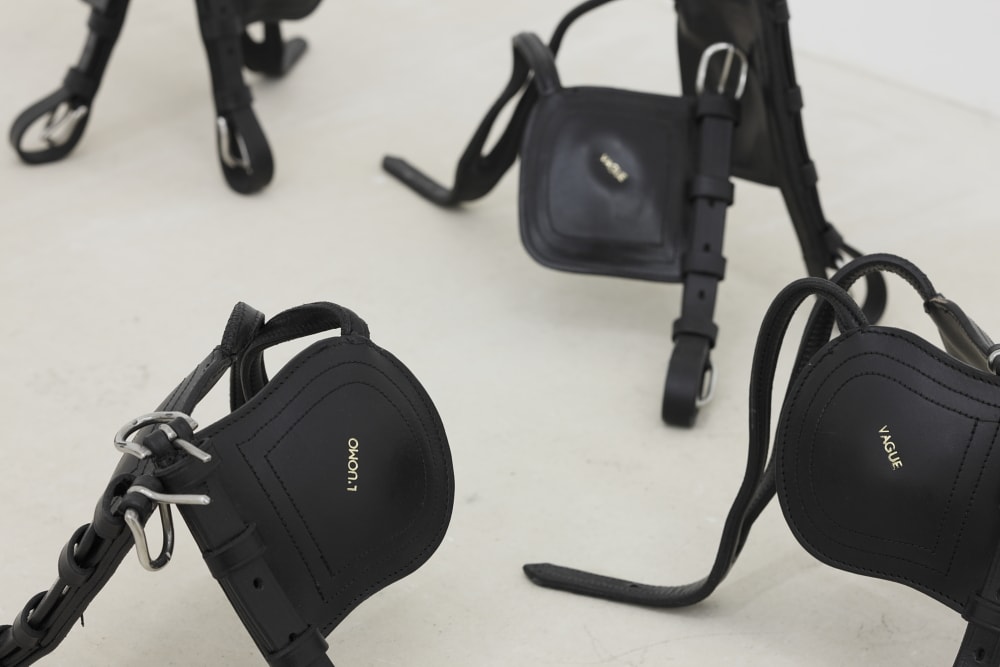 One year ago Edgars Gluhovs lefthis position in a Zurich private bank to fully dedicate himself to his artistic practice. The present exhibition, titled L’UOMO VAGUE, is an overview of his activities since then. The exhibition features classically-framed photographs, drawings on acrylic glass, an installation of ready-made equestrian accessories as well as drawings on vintage Concorde in-flight stationery – all produced in the past year. Fragments and personalities from history, comedic elements and 20th century literature and symbols all permeate these works.

A special edition in the form of a flip-book, is printed in conjunction with the exhibition and presented during the opening. Also on the occasion of Edgars Gluhovs’ exhibition L’UOMO VAGUE Tobias Kaspar is presenting BIRCH WATER, a new limited edition piece in the form of an in-flight drink conceived by the artist for Kim?. BIRCH WATER is being produced by BIRZĪ and consists of fresh birch sap tapped directly from Latvian trees. For it’s packaging and labelling Tobias Kaspar worked with the Berlin graphic design studio HIT.

Edgars Gluhovs (born in 1980, Riga) is an artist currently residing in Berlin and Zurich. He studied at The Arts Institute at Bournemouth and at the Staedelschule in Frankfurt. Edgars Gluhovs works in a variety of media, amongst others – drawing and photography. His works have been shown in solo and group exhibitions at various galleries and institutions, amongst them Kim?, Riga, Kunsthalle Glarus, Halle für Kunst Lüneburg, Gallery Patrick Ebensperger, Berlin. He received a Swiss Art Award in 2013.

Tobias Kaspar (born 1984, Basel) has recently moved to Riga. He owns his name-sake jeans line and most recently staged THE STREET at theCinecittà lm studios in Rome (2016).