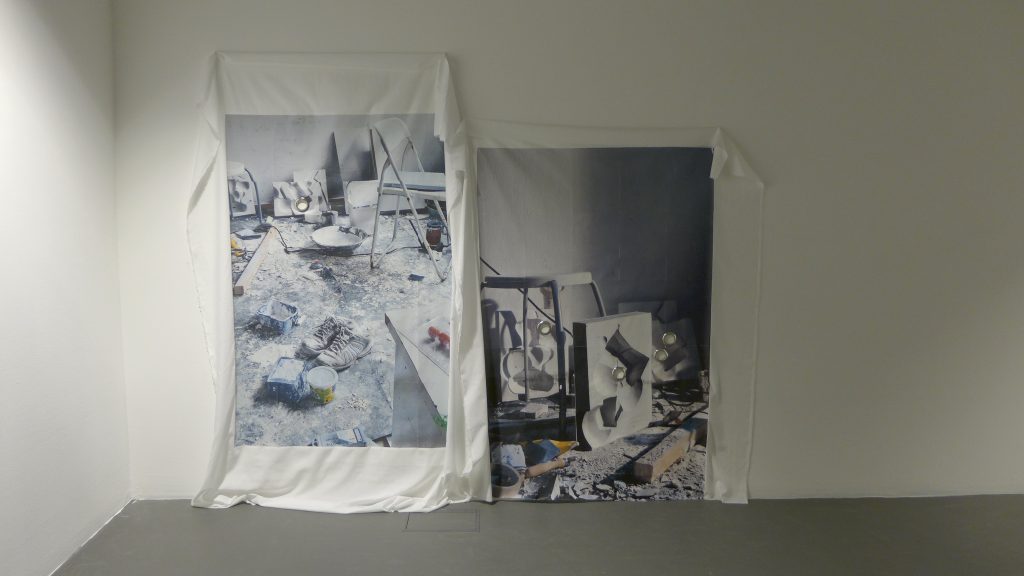 To begin with, I drink my coffee black. Had too much and now I’m scared. I decided to travel north with a crutch: I watch my every step, since everything I make is either too big or too small. Now this becomes a therapeutic journey – a forced session of retreat to reconsider my actions, to embrace myself. Somewhere in between the act, I fantasize about space. I strip it down and observe it from all sides. I almost see it helplessly floating, surrounded by the Immense Vastness of Nothingness. Hundreds of Volant black stadiums tightly surround me. Let me have another sip.

The new sculpture sequence “Monograms” by Evita Vasiljeva is a continuation of her studies on sculpture and its complex relationship with its surroundings. On this occasion, the exhibition space – a white cube hanging above the Opera restaurant in Umeå – is a point of departure, which mutely leads the way and shapes the nature of the sculptures to the current result. The ambience of the space plays almost a violent role, whereas the sculptures become victims through the limitations set as an embargo. One has to be aware of the scale and thus think small.

Further on Vita Kuben capitulates and becomes a sort of ready-made, the large scale is replaced with “Monograms” for contrast. As part of the sculptures there forms a reflection, a parasite or even a piercing. It occupies the work with its presence. Instead of putting “Monograms” in the space of Vita Kuben, Vita Kuben finds itself in “Monograms”. If this story were a plot for some movie, restaurant sounds would prevail somewhere in the background. You would hear the murmur of people and the tinkling of cutlery. You would stir your average coffee and get lost in it, or otherwise you’d still be looking for a reflection in a silver spoon, a spoon not made of silver. Elements of this muted show include: silvery spoons turned into metal bars, pitch black coffee turned into sculptural white objects and various others doused with silvery liquid that freezes at the moment of pouring.