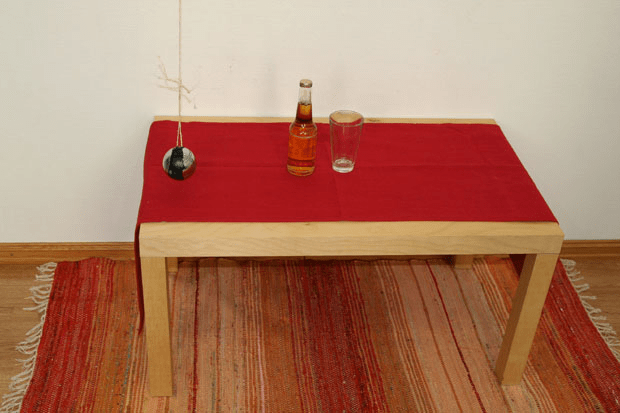 For the first time kim? in collaboration with the Riga International Film Forum “Arsenāls” will offer programme “KimKino” that will provide an opportunity to get acquainted with experimental video films created both by Latvian and foreign artists.

Janet Biggs
Performance of Desire
2007, 4’12”
USA
Performance of Desire explores the isolation and obsession required in the search for perfection and the boundaries of control and free will. The piece suggests new relationships between beauty and strength, as well as age, desire, and power.

Nicole O’Niel
Fugge’s
2009, 11’05”
The Netherlands
Film made by the young Dutch artist Nicole O’Niel was created during her studies at the Royal Academy of Art in The Hague, The Netherlands. The video is inspired by human behaviour in a group and as an individual.

Ulf Kristiansen
The Art Reception
2009, 11’14’
Norway
An autobiographical black comedy about artistic failure. Ulf Kristiansen tells a story that ends and blends fantasies (sexual, artistic and violent) into a game of lost innocence.

Karl Tebbe
Infinite Justice
2006, 2’38”
Germany
War is only make-believe by other means. Infinite justice takes fragments from war reports shown on German television – Iraq war at its best. Sold in the USA, suitable for children over age 5. Choking hazards – small parts. This isn’t Disney. Not „Team America”. This is war. And we have friends on both sides.

Bryan Zanisnik
Family Reunion
2007, 6’20”
USA
In the video “Family Reunion” Zanisnik’s grandmother portrays a Vietnam war veteran and a vindictive immigrant who attacks nearby Americans. The video was shot by Zanisnik when he was 13 years old, only to be stored in his parents’ basement for 14 years. Upon finding them, Zanisnik recontextualized the editing and presented them as an absurdist artefact of his youth and as an examination of war, immigration and family from a distinctively American point of view.

Jan Hakon Erichsen
Close To Home
2007, 1’15’
Norway
The camera is pointed at a coffee table at all times. For each new scene a different object is placed on it. There are no visible people in the film, but one can sense the presence of someone behind the camera doing his utmost to destroy the things on the table.

David Armstrong VI
I’ve Been Thinking
2002, 7’00”
Canada
Over the course of the past decade the work of David Armstrong VI has revolved around the basic existential issue of the individual in relation to space. His work deliberately plays on several levels of perception and discomfort in order to disrupt our routine. One may see in his practice a strategy for infecting culture through the tenuous nature of its prototypes, and the video “I’ve Been Thinking” where the artist performs as a rap singer with all the genre’s clichés is no exception.

Bjorn Eric Haugen
Interface (Grey Area)
2006, 1’15”
Norway
Author who makes mainly political works from a conceptual platform where the idea to the work comes before the material, media or way of expression. The artist’s intention is to make the viewer reflect and discuss the speculative and spectacular of what we see on the screens that surround us in our daily life – from internet and computer games to TV and video.

Length of the programme: 46 min