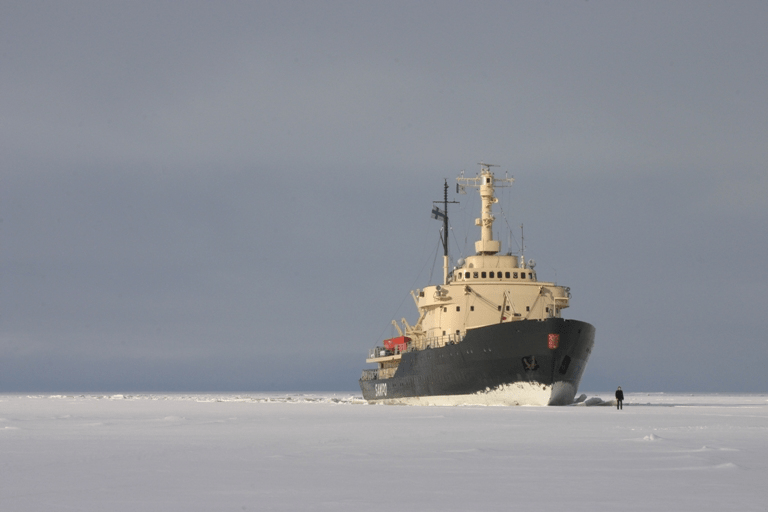 During Programme No. 6, from 7 November until 13 December, 2009, exhibition “Everything is Going to Be Alright” by the young and internationally renowned Dutch artist Guido van der Werve (1977) at the Kim? / VKN Gallery.

In September 2009, van der Werve, who divides time among the Netherlands, the USA and Finland, visited Riga with a lecture on his development as an artist and his future plans. Now kim? has provided an opportunity to visit van der Werve’s exhibition. The exhibition has borrowed its name from the 2007 work “Nummer acht. Everything is going to be alright” exhibited in Manifesta 7, the European Biennial of Contemporary Art in 2008. In this film, which Jessica Dawson from “The Washington Post” interprets as a metaphor for our journey through life, depicts the artist walking in front of the icebreaker “Sampo” in the harsh surroundings of the Gulf of Bothnia.

Van der Werve’s films are saturated with melancholy, loss and loneliness and the presence of long since gone composers can be sensed, however, at the most unexpected moments the melancholic mood is complemented by an absurd sense of humour thus attesting the artist’s passionate love of slapstick. As the prominent contemporary art magazine “Frieze” writes, “Guido van der Werve makes the kind of films Caspar David Friedrich might have dreamt up if he had had a sense of humour and access to a camera.”