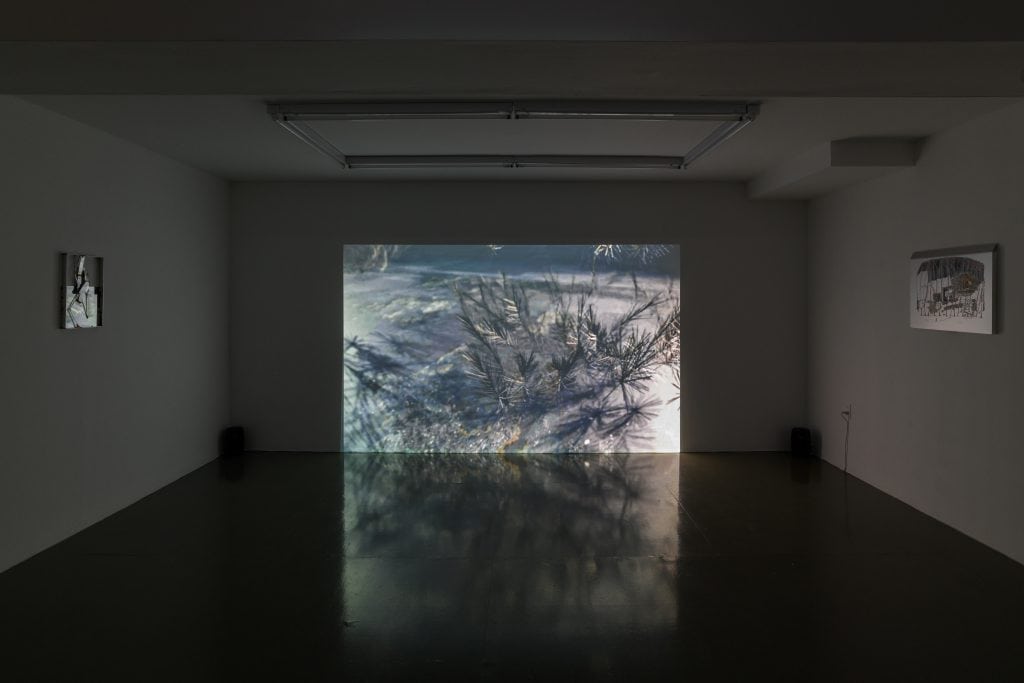 VAGABOND \ A PLACE HARD TO PLACE / was initially conceived as a proposal for a physical exhibition in the Latvian Pavilion at the 59th Venice Biennale in 2022. While unrealized, the project has morphed, developed and found its way online. This summer it reappears as a video projection at Jenny’s and simultaneously celebrates the American architect John Hejduk’s New York connection.

VAGABOND \ A PLACE HARD TO PLACE / is a “speculative” exhibition conceived in collaboration with artists Indriķis Ģelzis, Elza Sīle, and Joe Namy, as well as co-curators Zane Onckule and Jo-ey Tang, and architect Juris Strangots. Absorbing the heightened anxiety of the present, the project deploys a poetic and utopian imagination towards the creation of an intermingled media landscape—a digitally-conceived exhibition featuring a newly commissioned score, writing, CGI animation, and a website. The project emerges as a vision and as a compass, from private imagination, to the collective conscience of the digital, and back to an activation in physical space.

Adopting American architect John Hejduk’s (1929-2000) belief that during an existential crisis, time has the tendency to “collapse into space”, VAGABOND \ A PLACE HARD TO PLACE / strategically utilizes the spatiality offered by a digital environment in order to seek a novel form of empathy. As a speculative endeavor, the project works towards a future which considers the re-evaluation of our individual and collective alienation alongside our shared physical and mental limitations and boundaries. Expanding Hejduk’s legacy of imaginative architectural thought, VAGABOND \A PLACE HARD TO PLACE / is conceived as a sculptural-architectural vagabond-agent of our current social, political, psychological realities.

Exhibition is accompanied with a display copy of the reissue of the publication John Hejduk: The Riga Project (1989). Wall based art works by Indriķis Ģelzis and Elza Sīle further expands the project’s idea. Released as a set of 3 books, this revised edition of the 1989 publication contains the original English edition, a Latvian translation and Act Two: The Riga Project, a book that initiates preparatory works for the reenactment of The Riga Project in Riga and elsewhere in Latvia. Publication is issued by RISEBA Architecture and Media Centre (Riga) and Arhiteksti (2022).
Online-exhibition credits: