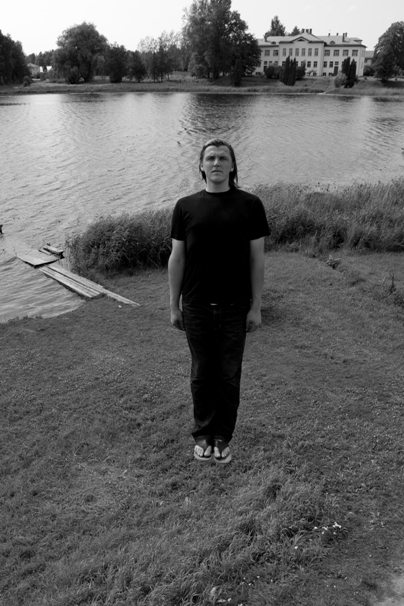 During Programme No. 7, 16 January until 7 February, 2010, exhibition “Unusual Place” by Kaspars Podnieks (1980) at the Kim? / VKN Gallery. The exhibited works were a continuation of the series exhibited alongside the works of Ojārs Pētersons, Monika Pormale, Jānis Garančs and others at the exhibition “Heroes of our Time” at Cēsis in 2009.

The notion of “place” that can equally well be understood as a portion of space, social station or a particular point that one has reached, as in a book,  derives both physical as well as spiritual meaning in the works of Kaspars Podnieks. As the artist himself states, “In my creative process, essential points of reference and objects of research are connected with Drusti. I come from there and I am there. There I gain the certainty that the work will be true and thus worthwhile to the others as well.”

Exhibition “Unusual Place” showcased photographs and videos that depict the artist levitating above a lake, country road, meadow. The artist defies gravity not with the help offered by the modern digital technologies, but with the help of complicated and laborious constructions doing everything “for real” so to say. This “for real” allows to describe his works as having a farmer’s thoroughness, stability and sense of scale, and even a certain rational humanism. (“Studija” 40/2005)

Kaspars Podnieks lives and works at Drusti. He graduated from the Department of Visual Communication, Art Academy of Latvia. He has participated in many international exhibitions, for example, “Time Will Show” in Flensburg, Germany and “Buket” in Moscow, Russia.