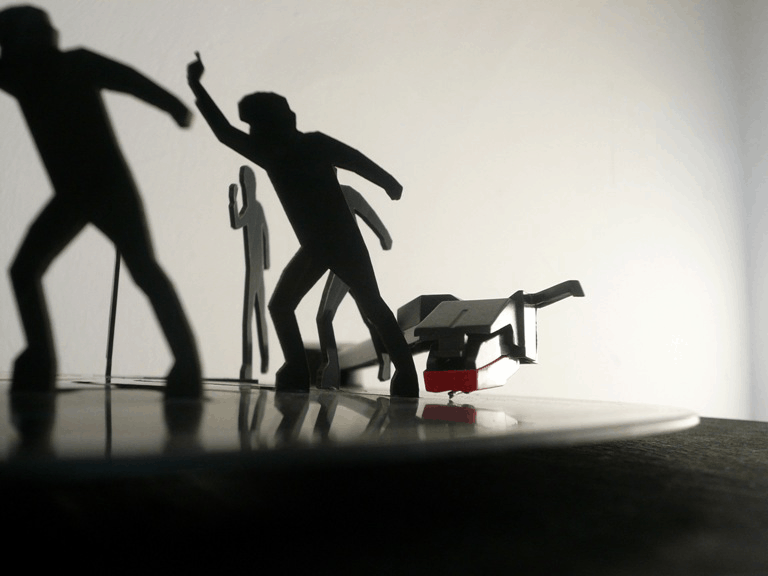 From 4th of September, the White Night, till 3rd of October, in Kim? / VKN gallery, an exhibition by Krišs Salmanis, titled “Insomnia” will take place.

The exposition is centered around three works of an experimental animation. Their mood is close to an unpleasant dream, where the most common actions become unbearable and seizing. Krišs Salmanis, doctoral student at The Academy of Media Arts Cologne, started his work with the current exhibition in autumn, 2009. One of the works, animation loop, is a variation on the historical “moving pictures” aparatus zootrope has found its appearance in an installation “Insomnia” ; it gather reflections about situations which appear to have no exit.

„Complicated Futility” – another animation loop, which shows the artist, cutting his hair, whileas the beard still keeps growing. When the hair is done, he starts with the beard, but in the meantime his hair keep growing again. Like “Insomnia”, it also seems to be a neverending process – ir is a neverending process, indeed. Krišs Salmanis has also included a minimization of a shot from the film of Michelangeo Antonioni “Blowup”, titled “Blowdown”; a poem “Digital Haiku”, which is the only poem by Krišs Salmanis, and several more works, like “Your Own Fault” and “Loser’s Parquet”, reflecting about dead-ends with unexpected solutions.

Krišs Salmanis (born 1977) is a Latvian artist; after graduating The Academy of Art in Latvia, the department of Visual Communication, now is a doctoral student at The Academy of Media Arts Cologne (KHM) in Germany. Krišs Salmanis takes part in exhibitions since 1997. His works have been showed in the group exhibitions in the Baltic States, Germany, Australia, Russia, Norway, Czech Republic, Poland, Thailand, Great Britain, Slovenia. His solo shows include:  „Atrastie” (The Found Ones, NOASS, 2009), „Pazudušie” (The Lost Ones, Rīgas Mākslas telpa, 2009), „Exit” (Atelier am Eck, Dusseldorf, Germany, 2008), „Zelts, sudrabs, plastilīns” (Gold, Silver, Plasticine; together with Daiga Krūze, Rīga, 2006), „100% vilšanās (100% Disappointment, together with Daiga Krūze, Rīga, 2004) a.o. The video installation „Tveice” (Heat) was a part of the Berlinale festival this year.