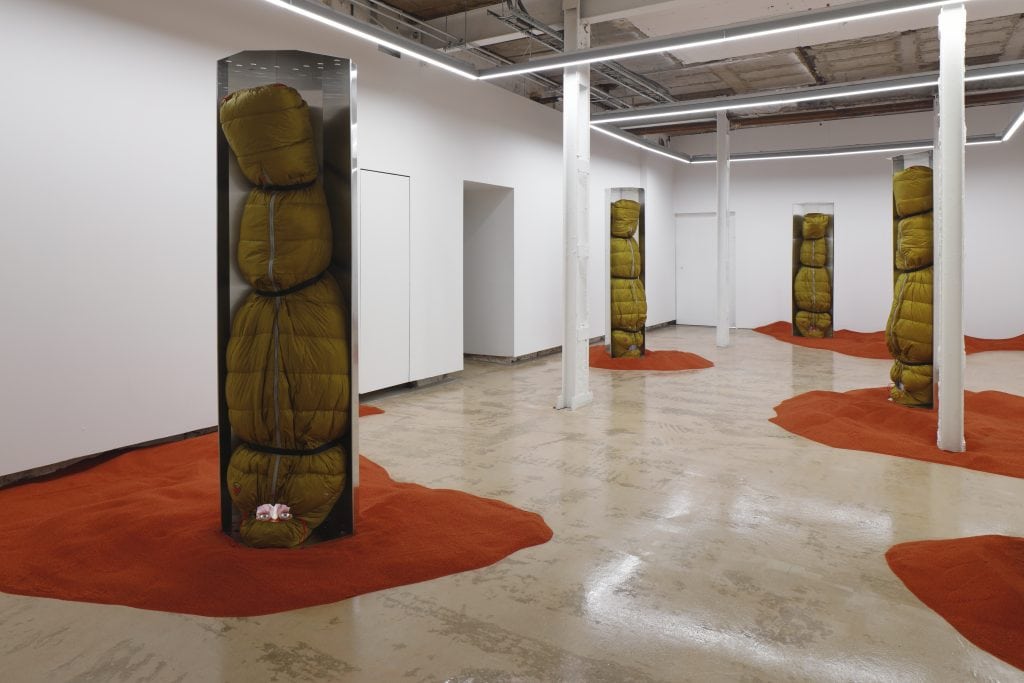 Entitled Last Resort, exhibition presents Stine Deja’s latest research into immortality and life extending treatments through a growing body of work that explores themes of transhumanism and cryopreservation. Death is a certainty of the human condition and a cycle that has been repeated throughout history with no exceptions. But what if, in the future, scientists are able to overcome this ultimate inevitability and cure the world’s most “dangerous” condition: mortality? What does it mean to be a human in the technological age and can we, through technology, alter the natural cycle of life? Or rather: what is death in the technological age?

The Last Resort displays a Thermal Womb (2019) – series of sculptures examining current cryopreservation methods. Worldwide there are currently 401 whole corpses, and even more heads, immersed in liquid nitrogen waiting for science to catch up so that in the future they can be brought back to life. Following extensive research Deja’s sculptures are an almost exact model of how one of the biggest companies of cryopreservation, Alcor, store bodies upside down in thermal sleeping bags, before they are immersed into metal dewars filled with liquid nitrogen. The bodies are stored upside down to keep the heads cool for as long as possible should an emergency occur. Each of the sculptures has a unique 3D animated face, which acts as a kind of portrait panel similar to those elaborately painted during the mummification process. In Ancient Egypt it was believed that the painted masks would help a dead person’s soul (Ka) to recognise its owner – a conundrum that future decryopreserved humans may have to contend with. The Last Resort presents the sculptures in a sand environment to reflect the location of Alcor in the Arizona desert allowing for Deja to imagine a dystopian future scenario, where the bodies are left behind, still optimistically waiting for their revival.

We live in a society obsessed with maintaining youthfulness and according to WHO, Global life expectancy has doubled in the last hundred years. In response to the quest for longer lives, in 2013 Google created ‘Calico’, a research and development company focusing on advanced technologies to increase our understanding of the biology that controls lifespan. Ray Kurzweil, engineering director and futurist working for Google, believes that we are little more than a decade away from taking major steps towards immortality. Immortality is something we all need to actively think about, as this could be an option within our lives.

Yet the quest for eternal life is far from new. The ancient poem, The Epic of Gilgamesh, tells the tale of his search for immortality. The Egyptians famously preserved bodies for use in the afterlife. While ancient alchemists sought the philosopher’s stone, a potion that would supposedly grant the drinker eternal youth. In 1920’s America it was fashionable for men to go through a xenotransplantation and have goat or monkey testicles inserted into their own, to boost their sex drive and revisit the virility of youth. And today ‘Ambrosia’ is the name of a start-up that harvests ‘young blood’ in order to perform transfusions of human plasma. Cryopreservation is just another on the endless list.

This exhibition is made in collaboration with Tranen Contemporary Art Center, Hellerup, Denmark.